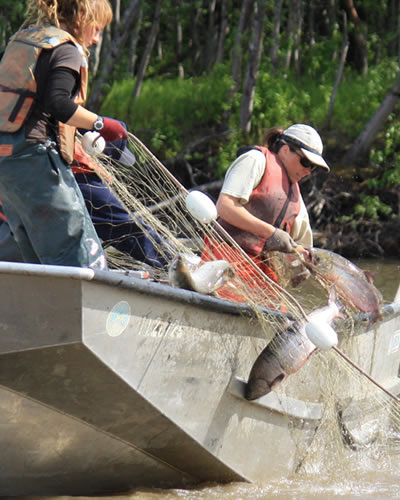 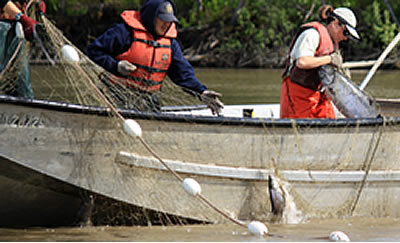 Gillnetters release fish as quickly as possible to minimize the number of fish that die after being caught in the net. Fish that do not survive are donated to the nearby community of Pilot Station for subsistence use.

In the lower Yukon River, large runs of multiple species migrate upstream at the same time. And while sonar can count fish, it can’t identify fish by species. To separate sonar-detected fish by species and produce estimates for each, the sonar site relies on drift gillnets. Throughout the field season, sonar site crew complete 18 drifts per day. At the end of the day the sonar site project leader examines the gillnet catch and based on the proportion of the catch represented by each species determines how many of the sonar-detected fish should be counted as king salmon, chum salmon, sheefish or some other species.

The goal of the sonar site gillnetting project is not to catch as many fish as possible, but to catch a good representative sample of the fish being detected by the sonar. To achieve this goal, the sonar site crew drift gillnets just downstream of the sonar transducers, use several net mesh sizes and have been testing longer net lengths. They use six different nets ranging from a mesh size of 2.75 inches to target small fish such as ciscos to 8.5 inches to target king salmon. Using six different mesh sizes enables the crew to capture all of the species encountered by the sonar. Traditionally the site uses gillnets measuring eight meters deep and 25 fathoms long. But in 2010, the site began field testing 50-fathom nets in response to concerns that fish might be dodging the shorter nets and skewing sonar site estimates. As of the beginning of the 2011 season, researchers had not found a significant difference between estimates generated using 50-fathom nets and estimates generated using 25-fathom nets.

In addition to helping biologists separate sonar-detected fish by species, the gillnet project also collects data that helps them track trends in king and chum salmon runs. While gillnetting, crew document fish length and sex, and collect scale samples for aging fish and tissue samples for determining the genetic composition of the run. A tissue sample is taken by clipping an enlarged pointed scale at the base of the pelvic fin known as the axilary process. The Pilot Station site is the only sonar site in Alaska where tissues collected for genetic analyses are used for inseason management. The samples are used to provide biologists with information about where in the drainage sampled king and chum salmon are migrating to. 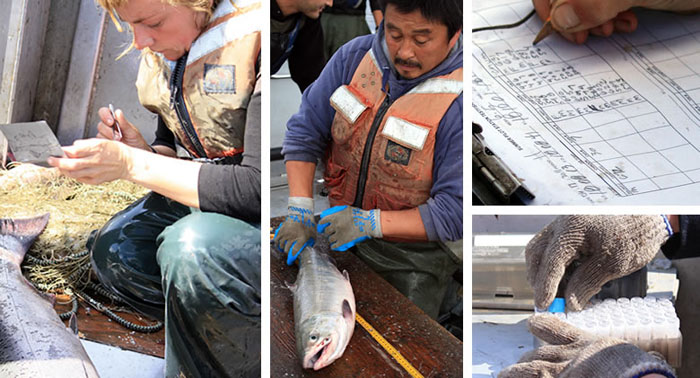 Before they are released, all gillnet-captured fish are measured (center) and identified by species, and all king and chum salmon are identified by sex. This information is recorded on data sheets (upper right). Additionally, tissue samples (right bottom) are collected from all king and chum salmon and deposited into vials. Finally, scale samples (left) are collected from all king salmon.

In 2011, ADF&G launched a two-year acoustic tagging project to track king and chum salmon migration paths past the Pilot Station sonar site. Project technicians will tag and release 600 king and chum salmon 20 miles downstream of the Pilot Station sonar site. As the salmon resume their migrations, the tags will emit an acoustic signal. At the sonar site ten underwater microphones—known as hydrophones—will listen for the tagged fish and record data that can be used to calculate their location in the river. Location can be calculated for any tagged fish that swims within range of at least three hydrophones. Additionally, each tag will transmit data about water temperature, how deep the fish is and the individual identity of the fish.

The tagging project is designed to provide biologists with detailed information about migration patterns that might be used to improve king and chum salmon estimates. Fisheries biologists know salmon traveling past the site migrate along multi-lane fish highways close to the banks rather than throughout the entire width of the river, but know less about which lanes each species migrates in. Species-specific data about these migration patterns revealed through the tagging study could help biologist determine how well the site’s estimates represent chum and king salmon and provide insights that could lead to improvements in the site’s tools and methods.

Project technicians insert tags into salmon through the mouth and into the esophagus (left). Very sensitive underwater microphones—known as hydrophones—are attached to buoys and submerged at the sonar site to listen for the coded sounds emitted by tagged fish. The sounds emitted by the tags are too faint to hear with the unaided human ear and do not bother fish. Play the audio sample below the hydrophone (right) to hear the sound emitted by the tag as amplified by a receiver. 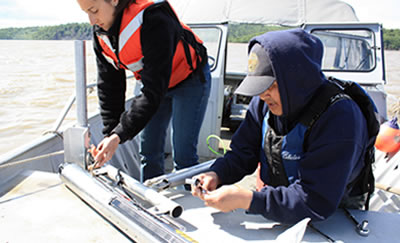 A fisheries biologist and sonar site technician prepare to mount a side-scan transducer to the side of the boat to look for fish. The side-scan is used to find fish when they cannot be detected by shore-based sonar due to silt.

When lower Yukon River water levels rise, currents sometimes carry sediment downstream in a thick band of silt. At the sonar site, a silt band sometimes flows along the site’s left bank and, like a curtain, hides fish from shore-based sonar transducers. But starting in 2010 fisheries biologists adopted a new tool to peek behind the curtain of silt-side-scan sonar. Now when a band of silt along the left bank blocks shore-based sonar from detecting fish, sonar site crew can observe fish on the other side of the band by looking down into the water from a boat using the side-scan sonar. The transducer emits sound waves toward the river bottom looking for fish in a 720-foot wide area perpendicular to the bank. Cables connect the transducer to a laptop computer that displays detected fish with images similar to the fish traces displayed by split-beam sonar (see Site Sonar Tools). The side-scan sonar could become an invaluable backup tool when a severe silt band occurs, as it did in 2009. Heavy flooding during spring breakup in 2009, created a silt band that blocked fish detection off the left bank and prompted ADF&G to purchase the side-scan sonar in 2010.