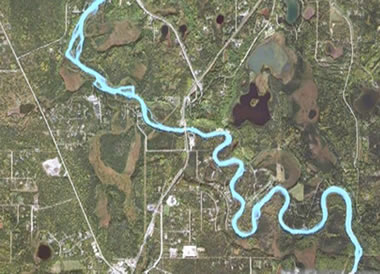 The Kasilof River is a short river at the base of an impressively large sockeye spawning lake. Learn about how the lake influences the river's water quality and more about where the sonar site is located and the conditions under which it operates.

Information collected at the Kasilof River sonar site is used to produce abundance estimates for sockeye salmon and draws strong interest from personal use and commercial fishermen. Situated in a publicly accessible location just upstream of a Sterling Highway bridge on the Kenai Peninsula, sonar site crew members frequently answer questions from visiting fishermen interested in the site's counts and operations.