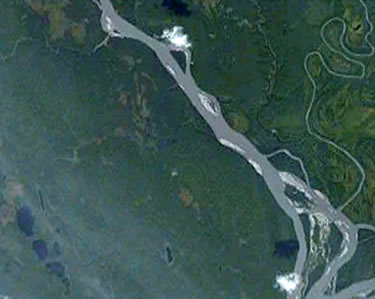 The Yentna River is one of the most challenging rivers in which ADF&G uses sonar to detect fish. The river is extremely turbid and wide. Also, water flows fluctuate greatly due to rainfall, flushing large quantities of debris downstream.

The Susitna River is the third most productive sockeye salmon river in Upper Cook Inlet and, as its largest tributary, the Yentna River is responsible for more than half of Susitna sockeye production. But the Susitna and Yentna rivers also produce abundant populations of chum, coho, king and pink salmon. With so much diversity, it's difficult to monitor any one species. Of the four sockeye salmon sonar projects the Alaska Department of Fish and Game operates in Upper Cook Inlet, the Yentna River project is by far the most challenging.

ADF&G fisheries managers once used the Yentna River sonar sockeye estimates as an early indicator of escapement into the Susitna drainage. But after a suspiciously low estimate in 2005, ADF&G began a program to examine the accuracy of these estimates and determined by late 2008 that the project was grossly underestimating sockeye salmon returns. Consequently, ADF&G stopped using Yentna sonar as a management tool and in 2009 began operating the project for research only, implementing new studies in an attempt to resolve issues undermining the site's ability to assess sockeye salmon stocks.