Brown bears have a larger track size. Toes are squeezed together with little or no spacing and do not form an arc.

Depending on the season or diet, it is possible to decipher what the bear ate from the undigested food evident in the scat.

Alaska has an estimated 30,000 brown bears statewide. In 2007, about 1,900 brown bears were harvested in Alaska. Of that figure, about 700 were taken by Alaska residents and roughly 1,200 (or 67 percent) were taken by nonresidents. Bear hunting seasons are held in both spring and fall in some areas but only in fall in other areas. It is illegal to kill cubs and females with offspring. Nonresident brown bear hunters are required to have a guide or be accompanied by an Alaska resident who is a relative.

Brown and grizzly bears are classified as the same species, Ursus arctos. Brown bears on Kodiak Island are classified as a distinct subspecies from those on the mainland because they are genetically and physically isolated. The term “brown bear” commonly refers to animals found in coastal areas, and brown bears found inland and in northern habitats are often called “grizzlies. Like black bears, brown bears vary widely in color. Brown bears can range from dark brown through light blond.

Brown bears are larger than black bears and have a more prominent shoulder hump, less prominent ears, and longer, straighter claws. Both the shoulder hump and the long claws are adaptations related to feeding. The long claws are useful in digging for roots or excavating burrows of small mammals. The musculature and bone structure of the hump are adaptations for digging and for sprinting to capture moose or caribou for food. Despite their bulk, bears are surprisingly fast and agile.

A bear’s weight varies with the season. Bears weigh least in the spring or early summer. They gain weight rapidly during late summer and fall and are waddling fat just prior to denning. At this time most mature males weigh between 500 and 900 lbs (180 – 410 kg) with extremely large individuals weighing as much as 1,400 lbs (640 kg). Females weigh half to three-quarters as much. Bear hides are prized by hunters but the meat of a brown bear is generally considered unpalatable and hunters rarely eat it.

Brown bears eat a variety of foods including berries, grasses, sedges, horsetails, cow parsnips, fish, ground squirrels, and roots of many kinds of plants. Brown bears are capable predators of newborn moose and caribou, and can also kill and eat healthy adults of these species. Bears also consume garbage in human dumps, as well as all types of carrion.

Brown bears are found throughout Alaska except on the islands south of Frederick Sound in southeastern Alaska, the islands west of Unimak in the Aleutian Chain, and the islands of the Bering Sea. Except for breeding pairs and females with offspring, bears are typically solitary creatures and avoid the company of other bears. Exceptions occur where food sources are concentrated such as at streams where bears can catch salmon swimming upstream to spawn. 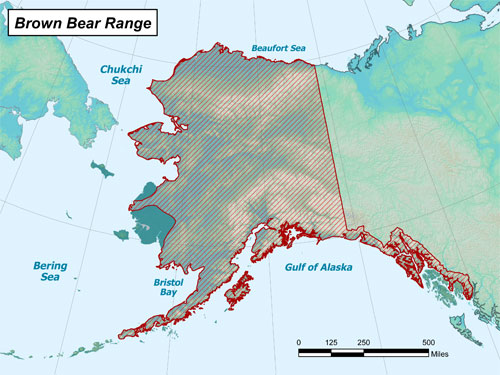