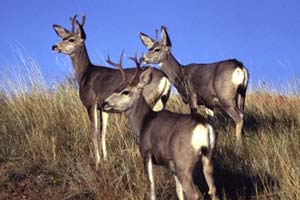 Mule deer (Odocoileus hemionus) are an extremely adaptable species that inhabit a wide range of ecosystems in western North America, including grasslands, shrublands, woodlands, mountain forests, semi-deserts, agricultural land and high mountain habitats. Despite their diverse habitat use, mule deer populations have seen fluctuations since the mid-1900s over most of their traditional range. While some populations remain stable, according to studies, other populations have seen a decline.

Pressure from human influences, including urban and rural development over the years have caused a loss in suitable habitat, which is a contributing factor to mule deer population decreases. In addition to these pressures, non-native vegetation has replaced nutrient dense native plants, which causes deer and other wildlife to find food sources elsewhere. 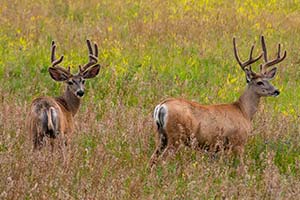 In Alaska, mule deer do not have an established traditional range, but sightings are reported from the eastern Interior to northern Southeast Alaska. All have likely immigrated from within the species' current range in Yukon, Canada. A mule deer was killed by a vehicle near Fairbanks in May, 2017; in 2013, three were reported north of Delta Junction; and a mule deer was photographed in July 2016 near the Fort Knox gold mine near Fairbanks. Canada's Yukon Territory has an established mule deer population, and therefore mule deer naturally migrate west through valleys, forests and tundra habitats. Mule deer have also been seen in Southeast Alaska, with sightings reported near Haines and Skagway as recently as spring of 2019.

The mule deer is named for its large ears, that resemble those of a mule, which are about three-fourths the length of the head. It can also be identified by the color of its tail and overall size — especially when compared to the two subspecies, the Sitka black-tailed and Columbia black-tailed deer.

The coat of a mule deer is reddish-brown in the summer, and transitions to brownish-gray in winter. They have a distinctive white rump patch and a narrow white tail with a black tip. 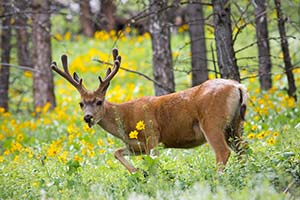 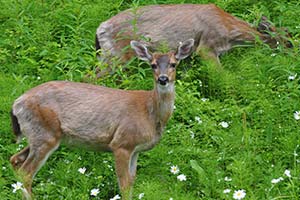 Beginning in late October, mule deer bucks enter the "rut" or mating season. Bucks closely matched in size and strength may engage in battles for the right to mate with does in estrus. They lock antlers and fight until one buck backs down and flees. These victorious bucks attract females to them and attempt to defend them against the attention of other (often younger) bucks. Sexual maturity happens around 18 months for does; the prime mating age for bucks is between three to six years of age. Does may mate with more than one buck and go back into estrus within a month if they do not become pregnant.

The gestation period is approximately 200 to 210 days, and the bulk of the fawning period happens in early summer. The female isolates herself and drops her fawn in a protected spot, where it remains for seven to 10 days before it is strong enough to follow her. At birth, fawns are spotted and weigh approximately 5.5 pounds (2.5 kilograms). The young ones are weaned between 60 to 75 days, at which time they begin to lose their spots. Mule deer usually live nine to 11 years in the wild.