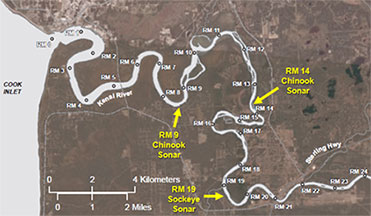 The Alaska Department of Fish and Game (ADF&G) has used sonar to estimate king salmon abundance in the Kenai River since the mid-1980s; originally near River Mile (RM) 9 and more recently (since 2013) at RM 14. Adaptive Resolution Imaging Sonar (ARIS) is currently used at the RM 14 site. Estimating the abundance of Kenai River king salmon is a challenge because king salmon run timing overlaps with the much more abundant sockeye salmon, as well as pink and coho salmon. ARIS can be used to distinguish different sizes (lengths) of fish, but not different species of the same size. Consequently, large, older-age king salmon can be distinguished from other smaller fish using sonar alone, but smaller, younger-age king salmon cannot. ADF&G has used size and species information from the RM 9 netting project (please see Kenai River RM 14 Other Tools tab) combined with sonar counts from the RM 14 project in an attempt to differentiate smaller king salmon from other species of salmon, but this method is sensitive to inseason variations and has required significant post season adjustments. For this reason, ADF&G now assesses king salmon abundance inseason based on daily estimates of large fish (fish greater than or equal to 29.5 inches mid-eye to fork) as measured by the sonar; or greater than or equal to 34 inches from snout to tip of tail. These large-fish estimates are more accurate and timelier and can be produced without netting data. Post season estimates of all king salmon, regardless of size, are still produced using RM 9 netting data and RM 14 sonar counts.

The original king salmon sonar site located near RM 9 produced daily and annual estimates of king salmon passage from 1987 through 2014 using a combination of dual-beam, split-beam, and multi-beam (Dual Frequency Identification Sonar - DIDSON) technologies. The RM 9 site was chosen because the site: 1) was located below king salmon spawning grounds ensuring all king salmon passed the site prior to stopping to spawn, 2) was located close to the mouth of the river allowing fish to be detected early in the run, thus providing timely data for management purposes, and 3) had a near-perfect linear bottom profile required to detect fish in the middle of the river using dual (and later split-beam) sonar technology.

The site also had many disadvantages, primarily related to its location within tidal influence which caused incomplete coverage of the cross-section of the river behind the sonar transducers; milling fish behavior related to tidal flux; and physical risk to sonar gear by large debris carried by extreme tidal activity.

The transition from split-beam to DIDSON multi-beam technology between 2010 and 2012 opened the option of moving the sonar program upriver above tidal influence. In 2011, ADF&G began the process of identifying potential sites above tidal influence. The section of river at RM 14 exhibited a nearly ideal bottom profile for sonar deployment and was selected as the preferred site for further investigation. During the 2013 and 2014 seasons, ADF&G operated a full-scale experimental project at the RM 14 site using the newest generation of DIDSON technology referred to as Adaptive Resolution Imaging Sonar (ARIS), while continuing to operate the historical RM 9 site. Based on results of the 2013 and 2014 studies (PDF 376 kB), ADF&G chose to discontinue operations at RM 9 beginning in 2015 and to use sonar data collected at the RM 14 site to estimate daily and seasonal passage of king salmon into the Kenai River.

There were several advantages to moving to RM 14. One of the main benefits was the ability to achieve near bank-to-bank coverage of the river with sonar, which was not possible at the RM 9 site. Near complete coverage improves ADF&G’s ability to detect almost all fish migrating upriver past the site. There is also less potential for damage to the sonar gear and data loss at the RM 14 site because the narrow river width allows the gear to be deployed closer to shore. This combined with the lack of extreme tidal fluctuations reduces the chance of large debris dislodging the equipment deployed in the river. Finally, although some milling and holding activity occurs at the RM 14 site, the near complete sonar coverage across the river and the lack of slack water due to tidal fluctuations reduces the possibility that milling fish will pass upstream or downstream undetected by the sonar. Taking these factors into account, the move to the RM 14 site improved ADF&G's ability to more accurately estimate king salmon passage.