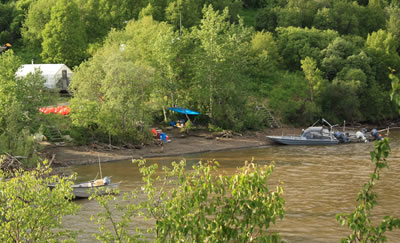 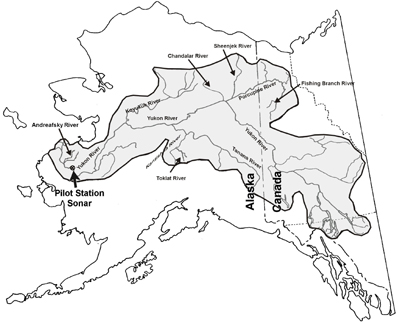 The Pilot Station sonar site is located approximately 121 miles upstream of the mouth of Yukon River and near the city of Pilot Station. The sonar site consists of two counting stations located across from one another on the banks of the river. One of the two counting stations is located at the site’s main camp on the river’s north shore (right bank), while the second station is located on the south shore (left bank). At each of the site’s two stations, a sonar transducer is submerged near the bank. The site is not accessible by road, but the sonar site's large white tents and buoys make it easy to see from boats passing by.

The Yukon is Alaska's largest river. The river's watershed covers 330,000 square miles, an area larger than Texas. From its headwaters in Canada to the Bering Sea, it flows 2,300 miles through a sparsely populated and remote landscape in Canada and the central landmass of Alaska. Conditions for operating sonar in the lower Yukon River are challenging. The lower river is deep and wide, and its unstable riverbed sediments continually shift. At the sonar site, the rocky riverbed profile along the right bank is stable, but the silty riverbed along the left bank changes continually requiring the sonar site crew to frequently readjust the bank's sonar transducers to ensure proper coverage of fish migration areas. Silt and debris pose another challenge and particularly during spring breakup when floating rafts of trees and branches can knock over sonar transducers and bands of silt suspended in the river's current can obstruct shore-based sonar fish detection. Between the site's two sonar stations the river is 3,280 feet wide. The deepest point in the river at the site is 650 feet from the right bank and measures 80 feet deep. The right bank drops off sharply, while the left bank drops off gradually. Generally, most fish migrate alongside the shallower left bank, where currents are slower.

Why we chose this site

ADF&G chose this location for the sonar site because it is close to the mouth of the river yet far enough upstream to avoid the river’s wide multi-channel delta. Also, it is in a single-channel segment of the river where all migrating salmon must pass between the site’s two counting stations. Fisheries biologists wanted the site located close to the river’s mouth so that it would provide fisheries managers with timely abundance data and to ensure the vast majority of salmon would pass the site before leaving the main-stem river for their spawning tributaries. Salmon migrate from the mouth of the river to the sonar site in just two to three days and the Andresfsky River is the only tributary below the site in which salmon spawn.