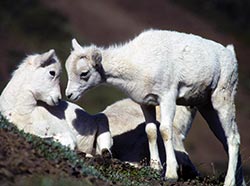 A drive along Alaska's Seward Highway south of Anchorage provides remarkable opportunities to see mountains, glaciers, and wildlife. Several miles past Potter Marsh, Dall sheep often gather quite close to the road, at a spot called Windy Corner. This is the only place in the world where Dall sheep can be seen at sea level from a nearby road. Dall sheep can be seen at Windy Corner throughout the year. Often, travelers catch sight of them on the cliffs above the road.

They are attracted to this spot because it is a mineral lick. In general, sheep rest on grassy ledges to elude predators, such as coyotes, wolves and bears. Most of the sheep here are ewes, lambs and young rams, although a few mature rams are also seen. If you are traveling in late May or June, watch for ewes and newborn lambs.

In spring, Dall sheep shed their woolly winter coats and don't look as sleek as they will later in summer or as roly-poly as they do in winter. If you visit Windy Corner in November or December, watch for rutting behavior among larger rams. You might be lucky enough to see two rams butting heads, trying to establish which one is dominant.

Dall sheep can be found in different areas throughout the state. Their preferred habitat is alpine tundra with tall shrub thickets. Look for sheep by scanning rocky mountain slopes and alpine areas in and near Denali National Park and along northern highways. In summer, they look like groups of small white patches against the mountains and you can often count fifteen or twenty together.

Do not park on the shoulder of the highway; use appropriate turnouts. Stay well clear of on-coming traffic and be completely off the road. Do not feed the sheep or other wildlife and be careful about getting too close. Watch for changes in their behavior, like skittishness or if they move away.

Windy Corner is located at milepost 106 along the Seward Highway heading south from Anchorage.