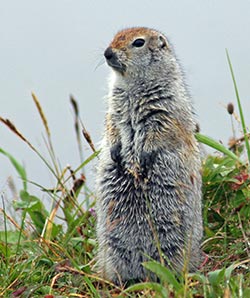 Government Hill, one of the oldest residential areas in Anchorage, is also home to a small colony of arctic ground squirrels. Sometimes called "sic-sic" for their repeated warning call or "parky squirrel" because their soft fur is used to make parkas, Arctic ground squirrels may have migrated to Government Hill by hitching rides in barges or containers from Western Alaska. Arctic ground squirrels are most abundant and visible along East Bluff Road on Government Hill, between the Port of Anchorage and the Alaska Railroad staging areas in the northwest part of town. Look for their burrows in the park north of the road and in lawns south of the road. Quietly watch burrow entrances for a few minutes from at least 30 yards away and listen for their sic-sic calls. From late September through April they are hibernating and cannot be seen.

Interested in witnessing the age-old contest between predator and prey? Keep an eye out for red foxes, which prey on Arctic ground squirrels. Their flashy red coats and keen senses of sight, smell, and hearing contribute to their image as cunning creatures. They travel along roadsides, even in areas with lots of people. Look for them in Government Hill parks during early morning and late evening. These open and grassy habitats are also home to small rodents such as voles, another favorite fox food.

Turn around is fair play - eagles are one of the fox's natural predators and can be found throughout the Anchorage bowl.

Stay in the parks or on the road and do not trespass on private property. Resist the urge to feed the foxes and squirrels. If fed by people, they may become nuisances and have to be destroyed.

Government Hill in North Anchorage is within easy walking distance from downtown and the railroad station. If you are driving, take the bridge from 2nd Avenue (near the Anchorage Hilton) in downtown Anchorage to the northern side.