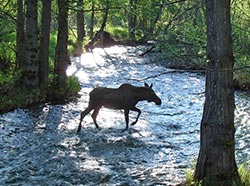 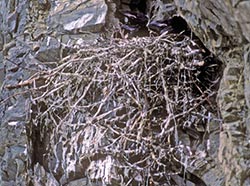 Upper Campbell Creek, beginning at the Campbell Creek Gorge, is a great place to take a day hike and look for wildlife. The multiple forks of Campbell Creek rush down from the higher elevations of the Chugach Mountains where they unite in Bicentennial Park, meander through Anchorage, and eventually spill into Knik Arm of Cook Inlet.

In spring, the high vantage point overlooking the gorge is a great place to watch ravens feeding their young and young ravens learning to fly. In recent years, there has been a viewable nest on the south-facing cliff, which is most visible from the south side of the gorge. Young ravens hatch earlier than most Alaska birds, usually in late March or April. They remain in or near the nest for about 50 days after hatching.

Look for an occasional wolf or brown bear upstream from the gorge. Highly social animals, wolves usually live in packs that include parents and pups of the year. Like most wild animals, the best time to see them is early mornings and late evenings, and gray and black wolves are most common. Scan the trail, especially if it is muddy or snowy, for tracks.

Brown bears, like wolves, are most likely to be seen from a distance on the slopes at or above treeline, however, hikers occasionally have close encounters along the trail. Look for tracks in muddy areas, especially along the creek.

This longer and more adventurous route also provides good opportunities to see moose-especially during the mid-September to October rutting period and early winter as they congregate in the upper Campbell Creek drainage. Adult males can weigh up to 1,600 pounds. Their massive size, coupled with the clash of antlers as they joust, creates quite a sight. Their battles are usually over a female and the rights to mate. While serious conflicts are rare, some bulls receive a few punctures or other damage and occasionally die from their wounds. The winner, however, gets to mate.

The best place to observe raven social behavior in Anchorage is downtown, where ravens feed on human food in addition to natural foods and are often seen doing acrobatic maneuvers in updrafts near tall buildings.

Wolves, though elusive, may be found by scanning open areas and alpine tundra using binoculars or spotting scopes.

Take O'Malley Road east and turn left on Hillside Drive, then right on Upper O'Malley Road. Take a left on Prospect Drive, then left on Sidarof Lane and follow it to the trailhead at the parking lot at the end. Hike toward the power line and turn left (north) at the "T". Continue following the main trail and power line until they diverge then follow the footpath along the power line route until you reach the gorge (less than 2 miles round trip). To reach the upper drainage, stay on the main trail when it diverges from the power line and follow the Middle Fork Loop Trail. This approximately 7-mile route leads to the Glen Alps trailhead.