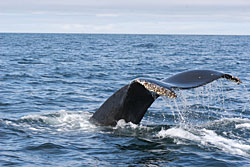 From Kodiak, the ferry passes through Marmot Bay on its way between Afognak and Kodiak Islands. South of Whale Island, throughout Whale Passage, sightings of marine mammals— individuals or large groups of up to 50—are very likely May through October.

Continue to watch for marine mammals and seabirds throughout this biologically rich region. In spring, humpback whales, North Pacific fin whales, and the less common sei whales migrate along the Alaska Peninsula coast.

Some North Pacific fin whales stay close year-round, wintering in bays and inshore waters along the west coast of the Kodiak Island region. Sei whales are most plentiful in early May or June and migrate south starting in August. Rarer yet, but still possible, are blue whale and northern right whale sightings. 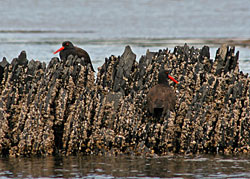 Dall’s porpoises, which travel in groups of up to 20, may be seen year-round. These outgoing animals are crowd-pleasers and seem to enjoy racing alongside boats. Sometimes confused with killer whales at a distance, the black-and-white porpoises are significantly smaller and create a “rooster-tail” splash with their heads as they zip through the water.

Seabirds on and around Afognak include tufted and horned puffins, black oystercatchers, and cormorants. Common and red-throated loons, mergansers, and harlequin ducks are also abundant.