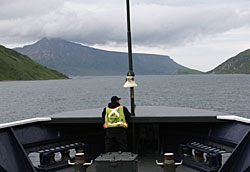 Approaching False Pass and the beginning of the Aleutian Islands

As you leave Cold Bay, watch for seabird communities on and near Deer Island, and at Morzhovoi Bay, near Amagat Island, a seabird-nesting island topped by a dome-shaped peak.

At False Pass, you have officially arrived at the Aleutian Islands. The community, located on the east side of Unimak Island, is the easternmost of the Aleutian Island communities and the first visited by the ferry. When you dock, you'll find yourself separated from the Alaska Peninsula by less than a mile of water in a narrow portion of Isanotski Strait. Though once thought to be a "false pass," this strait serves as a major route between the Gulf of Alaska and the Bering Sea, and the community is an important refueling stop for fishing fleets.

If you are restricted to the brief ferry stop, you likely won't have time to do much more than touch foot on a rocky beach. But some visit for longer stretches to explore the backcountry or for unusual mountain-climbing experiences. Residents share their island with five volcanoes, including Shishaldin Volcano, one of the most active in the Aleutians. It last erupted in 1999. 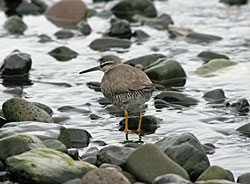 Animals found on the peninsula that can't swim or fly the short distance to Unimak Island won't be found here. But, unlike the other Aleutian Islands, Unimak is not bear-free. Brown bears do swim between the island and mainland, and population densities here are similar to those on the Peninsula (biologists estimated nearly 300 bears on the island in 2002). Caribou also occur on Unimak Island and occasionally cross the strait. At least one moose is rumored to have made the journey across the strait. Several land bird species, including yellow warblers and willow ptarmigans, reach the end of their ranges here and will not be seen further west in the Aleutians.

Gray whales are seen in the strait and Ikatan Bay from late April through June, often with calves. During their migration north, they are seen in large numbers. Killer whales, which prey on gray whales, may be seen year-round. Other marine mammals include Steller sea lions, seals and, in area kelp beds, sea otters. Emperor geese and ornately decorated harlequin ducks are both year-round residents. Look for the former feeding along beaches; the latter might be diving near-shore kelp beds.

Along Unimak Pass watch for tufted and horned puffins flying in mixed groups with murres. As evening falls, watch for fulmars and shearwaters. Glaucous-winged gulls are common. 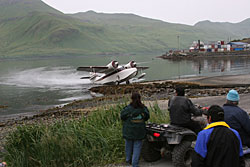 Short-tailed shearwaters, common along coastal waters of most eastern Aleutian Islands, are the most abundant bird species in Unimak Pass. Black-legged kittiwakes, northern fulmars, tufted puffins and whiskered auklets are also found in the pass, along with murres and crested auklets. Dall's porpoises are common.

Part of the Krenitzin Islands in the Fox Island Group, Akutan Island sits at the doorstep of the Bering Sea and the world's most productive ground-fish fishery. The community has a population of sea ducks, including long-tailed ducks and eiders, which winter in the Aleutians and nest in western Alaska's tundra in the summer. Among the few land mammals native to this region is the red fox.

While walking the town, check area bird feeders for songbirds, including gray-crowned rosy-finches.