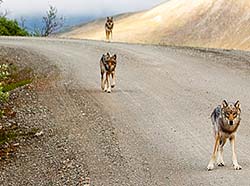 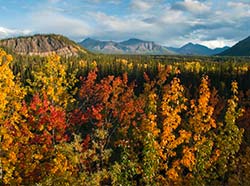 Fall in the Alaska Range.
← Resize →

Caribou feed on lichen and willows as they migrate along the northern slopes of the Alaska Range. Grizzly bears, often with cubs, dig for ground squirrels and munch on berries. Dall sheep graze high in the alpine tundra keeping a safe distance from predators. Visitors often spot moose in the eastern part of the park, and wolves in the more open western part. A variety of species, such as marmots, ground squirrels, red foxes, willow ptarmigan, and spruce grouse, are visible from the park road. Look skyward to catch sight of a long-tailed jaeger, a northern harrier, or a golden eagle.

Denali Park is largely a wilderness without trails, so designated by Congress, but the park service strives to accommodate persons with disabilities. The NPS website has extensive information on the park’s accessible features here: http://www.nps.gov/dena/planyourvisit/physicalmobility.htm

The Denali park entrance lies 240 miles north of Anchorage and 120 miles south of Fairbanks on the Parks Highway. The Alaska Railroad provides daily summer passenger service from both cities. Private vehicles are restricted within park boundaries.

Shuttle and tour buses run along a 90-mile gravel road in the park from late May to mid September. Bus space is limited; call 800-622-7275 or (907) 272-7275 or visit http://www.reservedenali.com to make reservations or be prepared to wait a day or two. Bring binoculars, warm clothing, raingear, and food. Adventurous travelers should consider a day hike or a backpacking trip in the park. Check for guided ranger hikes and campground talks.