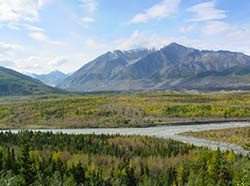 Looking across Delta River to the Alaska Range. 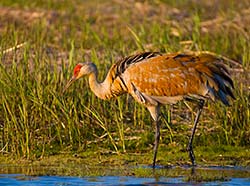 The Tanana Valley is the migration corridor for about two-thirds of the North American population of lesser sandhill cranes. Between 200,000 and 300,000 cranes pass through this region in May and September and may be seen by the thousands in the fields southeast of Delta Junction. Cranes also kettle here, a phenomenon where a large flock of birds will lift off and spiral upwards in preparation for migration.

A herd of about 300 free-ranging bison also inhabits the area. They are plains bison, descendants of 23 animals brought from Montana in 1928. They spend fall and winter in the Delta Junction Bison Range and the private agricultural lands in the area. During calving season, between late April and early June, they move a few dozen miles southwest to the gravel bars of the Delta River near Donnelly Dome and then summer along the river.

Moose are abundant throughout the region from Shaw Creek Flats north of Delta to the glacially-created kettle ponds bordering the Richardson Highway south of town.

The Delta Agricultural Project is a network of thousands of acres of privately-owned farmland east of Delta and north of the Alaska Highway. Oats, barley and hay are the primary crops, and draw birds and wildlife. Red-tail and rough-legged hawks; kestrels and peregrine falcons; harriers; great horned, great grey, short-eared and hawk owls can all be found hunting the agricultural fields, looking for ground squirrels, hares and rodents. On dusky summer evenings, little brown bats may be seen flitting overhead as they hunt insects. Smaller than swallows, bats can be identified by their distinct erratic, flapping flight.

A network of paved and unpaved roads crisscrosses the area, offering routes to explore and search for wildlife. South of Delta off the Alaska Highway, Road 1410, or Sawmill Creek Road (at mile 1403), access the fields, connecting with Clearwater Road, Nistler Road and Jack Warren Road, creating a variety of loop routes through the area. Keep in mind that this area is private property. If you venture off the road, you are on private land, whether fenced or unfenced, and you must have permission to access the area.