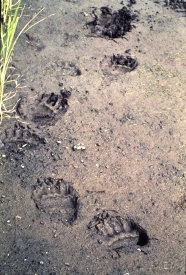 Dyea rivaled Skagway in both size and importance during the Klondike Gold Rush. While those days are long past, Dyea still hosts an abundance of wildlife each year. The Dyea Flats at the estuary where the Taiya River meets Taiya Inlet has a eulachon run in late April and early May that attracts large numbers of harbor seals, Steller sea lions and bald eagles. Eulachon are small (up to 10 inches), oily fish, and are the first major food source for many animals after the scarcity of winter. Harbor seals and bald eagles return to Dyea during the coho, pink and chum salmon runs between July and September. The salmon also attract bears to the river and estuary. Watch for bears and bear sign like scat, tracks and tree scratches. Great blue herons are seen throughout the year, and a variety of shorebirds and waterfowl come to the estuary each spring and summer.

The Dyea Flats is prime habitat for a variety of migratory and non-migratory birds, and there is excellent birding at the flats throughout the spring, summer and fall.

Stop in pullouts along the road to Dyea for views of Long Bay, where relatively calm waters and abundant food sources attract harbor seals and harbor porpoises, as well as marbled murrelets, harlequin ducks and Barrow’s goldeneyes.

The National Park Service maintains a campground and offers interpretive walks in the old Dyea town site in the summer. Commercial guided tours to Dyea are available as well. Not all tours are wheelchair accessible; ask when booking. Fee is for camping and tours only.

The well-maintained 12 mile gravel road to Dyea branches off from the Klondike Highway a few hundred yards north of town.