The throbbing drum of the ruffed grouse pulses in spring through the woodlands of Interior Alaska wherever stands of aspen and birch break the uniformity of the northern spruce forest. But ruffed grouse are most abundant where dense stands of young aspen or birch have become established after a fire or timber harvest. In such situations it finds the variety of plants it needs for food and shelter, and a host of small, flowering plants in sunlit glades for the chicks to eat and to hunt among for insects. 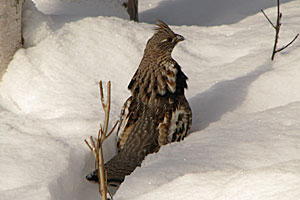 Ruffed grouse come in two color tones: red (actually rufous or reddish brown) and gray phases. Red-phase individuals in Alaska are not as richly colored as those from the eastern United States, but the back, and particularly the tail, are definitely reddish brown. Gray-phase birds have distinctly gray tail and rump feathers, paler bodies, and only a hint of light brown feathers along their sides. Both color types can occur in one family group. Scientists in Minnesota now believe that the gray birds have the advantage over the red ones whenever snow is on the ground for long periods every winter, since gray birds appear to be least susceptible to predation. This may explain why the gray-phase ruffed grouse dominate in Alaska.

Like most Alaskan grouse, the ruffed grouse establishes and advertises its ownership of a plot of ground in spring. Males drum from particular places in their territory, usually from a log, stump, or rise of ground. Careful study of ruffed grouse in northern states has revealed that the territories are actually established by older cocks in autumn. These dominant cocks are the first to begin drumming in spring. The first-year males, most of them unable to establish themselves on good territorial ground, “wait in the wings” until an older male is killed or until the sexual urge wanes among the early breeders.

Many people have heard ruffed grouse drumming in the fall. This common activity is most often associated with adult males who are advertising their presence to dispersing juvenile males, although juvenile males who have established territories may also drum. These males are essentially communicating to other males that there is “no vacancy” in the area.

Hens like to nest beside a stump, under a fallen tree, or beneath an overhanging shrub, especially along the edges of forest openings. The nests usually are not close to the male’s drumming site. Hens lay eight to fourteen eggs. Males do not help incubate or rear the young. The young hatch in about three weeks and quickly leave the nest with the hen. Family groups of hens and their chicks like dense shrub and moist places at the woodland fringe. The broods stay together until mid-September, when young birds disperse in what is known as the “fall shuffle.” Ruffed grouse do not form large flocks in fall and winter, as ptarmigan and sharp-tailed grouse usually do, but sometimes groups of six to ten birds stay together for weeks at a time. 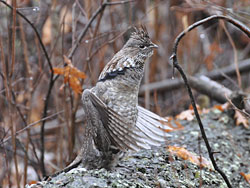 People who hunt ruffed grouse often hang up their guns in late October because the birds seem to vanish from the woods at that time. Certainly ruffed grouse are hard to find on bright winter days, even when the birds are quite common. The experienced outdoors person looks for these grouse as the sun goes down, because it is then that they leave their daytime roosts to fly into the tops of trees to feed. One of the most enjoyable winter experiences in Alaska is the sight of three or four of these handsome birds outlined against the glow of a late evening sky, busily harvesting their daily crop of aspen buds. The skier who accepts the invitation of a bright, crisp March day will, if he traverses good grouse habitat, be doubly rewarded by the sight of a ruffed grouse bursting through the roof of its night-time roost in the snow.

Of the seven species of tetraonids in Alaska, the ruffed grouse population densities oscillate the greatest in a nine- to ten-year cycle. In the last 40 years of the twentieth century, peaks have come in the latter part of each decade. This trend appears to be continuing. ADF&G biologists used this information to time live trapping and translocation of ruffed grouse from the Interior to the Matanuska-Susitna Valley in the late 1980s and the northern Kenai Peninsula in the late 1990s. Locally, snow depth can be critical to grouse survival in areas of extreme cold as they roost in the relative warmth under a blanket of snow. In the early 90s there was a local population crash in the Fairbanks area owing to lack of snow and extreme cold.

Where to Find Them

Ruffed grouse occur naturally throughout most of Interior Alaska in aspen forests in the Yukon, Tanana and Kuskokwim River valleys. Ruffed grouse also occur in Southeast Alaska, where they range out of British Columbia along the lower Stikine and Taku Rivers. The population transplanted by ADF&G to Matanuska-Susitna Valley has expanded down the Susitna River to Beluga Lake. The status of the transplanted population on the northern Kenai Peninsula is unknown at this time.

Birds are most readily found by focusing on forested areas where dense young stands of aspen predominate as a result of wildfire or forest management activities. In the fall, birds frequent the edges of forest and shrub where wild rose, highbush and lowbush cranberry, and blueberry are available. By late October these birds switch to their winter diet of aspen and willow buds.

Range of the Ruffed Grouse in Alaska

The ruffed grouse has been fairly successful at colonizing the northern forests, but unlike the spruce grouse, it has an affinity for hardwood stands that has allowed it to spread southward into the midsection of the United States. In the north, it occupies far fewer square miles than the spruce grouse, because its habitat is less widespread.

The shaded portion of the map indicates areas Ruffed Grouse are found in Alaska.