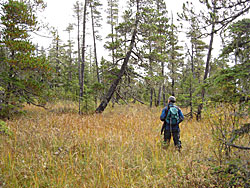 You are responsible for tracking and recovering every animal that you hit. Even if the animal runs from you at the sound of the shot, you must assume that your bullet or arrow hit the animal. Look for any signs of shot impact: Even game animals that are shot in the critical heart-lung area will often take off at a full run, only to fall some distance away. Depending on their injury, some animals may appear to run as though your shot completely missed them.

After you have taken your shot, stand still and focus your attention on the animal. If it runs, try to remember the sight picture when you shot. This will give you a clue where the animal might be hit. If the animal runs out of sight, pick out a landmark at the point where it disappeared. Much will be happening all at once, but try to mark in your mind the spot the animal was standing when you fired. Quickly use your binoculars to look in the direction the animal ran. It may have fallen, or it may be standing in cover watching to see if it is being followed.

If the animal is not in sight, mark the spot where you were standing when you shot. Use your compass or GPS unit to set a bearing to the point where the animal disappeared. Next, move slowly to the point where the animal was standing when you shot. This spot can be hard to find, so look carefully for any sign that would indicate that the animal was there and that it might be hit. Hair, blood, and disturbed ground vegetation are all indicators that you are in the right spot.

Most animals have different colors and textures of hair on their bodies. Knowing of these differences can give you more clues about the location of the animal’s wound. The characteristics of any blood you find can also give clues. For example, a wound in the lung or tracheal area can produce light frothy blood; dark blood may signal a wound to the liver or kidney area; and blood with small bits of vegetation and green stain in it indicates injury to the rumen or intestine. If you don’t find blood, it does not mean you have not hit the animal. An injury to an area where few large veins or arteries exist will produce little blood. Meanwhile, a high lung shot may not produce a blood trail until the chest cavity has filled with blood.

If an animal is hit in the heart-lung area and the bullet or arrow passes completely through the animal, droplets of blood can usually be found on the ground or vegetation. If the animal is moving through brush, the height of the blood trail on the vegetation can also give you a clue about the injury and whether the arrow or bullet exited. A horizontal pass-through shot will result in blood on both sides of the animal’s escape trail. However, a downward-angled pass-through shot may result in a blood trail on only one side because of the high entry point. It is important to understand that a "gut-shot" animal can move faster than you can and will travel great distances if it believes it is being followed.

If there is no clear blood trail, use your compass bearing and slowly begin to follow the animal. Move quietly and slowly and continue to look for blood signs. If you find tracks or blood, mark the spot with fluorescent surveyor's tape. Quit searching when it gets dark; it is too easy to become lost. Instead, return to the site the next morning, looking and listening for crows, ravens, magpies and jays. They may lead you to the dead animal.

To repeat, you are responsible for tracking and recovering every animal that you shoot. When you wound an animal, you must make every effort to track, find and kill it. If you fail to recover the animal, it could be considered part of your bag limit.