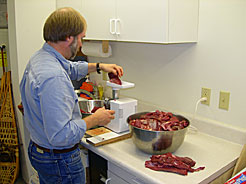 Healthy and nutritious, game meat is typically lower in saturated fat and calories than domestic meat. Alaskan game generally feeds on wild plants, shrubs, and trees that do not contain pesticides or herbicides. When game meat is well cared for, many people prefer it over domestic meat because of its unique flavor, low fat, and lack of additives such as antibiotics or growth hormones. The table below compares the levels of protein, fat, cholesterol and calories in various types of game and domestically available meats.

Some game meat has received a bad reputation for palatability. For example, many hunters shun bear meat. However, most hunters who do eat black and brown/grizzly bear say the meat is usually good or very good, unless the animal has been feeding on fish. Regardless of what a bear has been eating, its meat should always be well cooked to prevent trichinosis, a parasitic disease (also found in domestic hogs) that can infect humans.

Meat from animals taken during the rut also has a poor reputation. To avoid unpleasant taste, extra care must be taken when field dressing big game during this period. Males use aromatic substances in their urine to help attract females. These substances usually permeate the hide and hair during the rut; they can easily taint meat and be transferred by direct contact, such as hands touching the hide then the meat during skinning. Deer have scent glands on their lower legs, and these must be carefully handled to avoid tainting the meat.

Many big game animals have parasites. Hunters rarely notice them except when infection is extreme. Most are not transmissible to humans. However, dogs and cats are susceptible to some of these parasites. Therefore do not feed uncooked meat scraps or internal organs to pets.

For additional information on abnormalities, diseases and parasites commonly seen in game meat, see the ADF&G Parasites and Diseases page.