The pass at Nugget Divide marks the divide between the Nome River watershed (towards the ocean) and the Pilgrim River watershed to the north. The Game Management Unit sign at this location marks the boundary between two drainage-based hunting areas, each with their own regulations. At this point the road descends to the Grand Central River which is a major tributary of the Pilgrim River (originally called the Kruzgamepa or Kutskumipa) drainage.

This portion of the road is higher in elevation, better drained and much drier than lowland areas. The loose dry soils are good for burrowing by Arctic ground squirrels, which become food for bears, wolves, and eagles. Golden eagles and rough-legged hawks nest in some of the rockier valleys. Snow buntings nest in natural rock cavities on high, barren slopes. 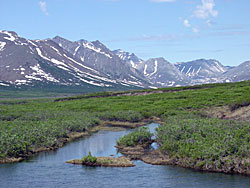 Grand Central Valley reaches deep into the Kigluaik Mountains. As you are heading north, the base of Mt. Osborn, the Seward Peninsula’s tallest peak at 4,714 feet, is visible far up the valley to your left. These mountains have classic U-shaped valleys carved by glaciers. The ice has long since melted leaving only small lakes at the headwaters of the side drainages. Red salmon migrate up the Pilgrim River into Salmon Lake from late July to mid August, and some continue up the Grand Central River as far as the bridge. Spawning occurs earlier at the bridge than in Salmon Lake because winter water temperatures are cooler in the river gravel, causing the eggs to develop slower than in the slightly warmer lake.

Grizzlies are fairly common in this valley as well as Salmon Lake valley, especially in late summer when there are spawned-out red salmon and ripe berries to feed on.

Harlequin duck and red-breasted merganser paddle in the fast waters, sometimes in the same place where the American Dipper plunges and walks underwater as it searches for insect larvae on the stream bottom. Bluethroat, yellow warbler, Wilson’s warbler, and Arctic warbler are relatively common species among the willows near the river and in small drainages along the road near the bridge. Arctic char entered the now landlocked glacial lakes long ago and through time they became isolated. Recent genetic testing shows that char in each lake have evolved into distinct subspecies.

One might expect to find a natural population of Dall sheep in the rugged mountains close to the Grand Central River, but none are present. Biologists speculate that the vegetation is too sparse on the rugged upper slopes and high alpine meadows where sheep could feed in relative safety from predators. Recent finds of old sheep skulls, however, have ignited debate on whether Dall sheep once populated the area.

Just past the entrance to the Salmon Lake Lutheran Bible Camp, water from a nearby spring is piped to the side of road. Many residents stop to fill their containers with cold, clear drinking water. 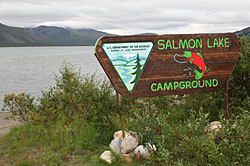 Heading north, an access road on your right leads to campground on the edge of the lake that is maintained by the Bureau of Land Management. It has a sand beach for swimming and walking, and the campground includes picnic tables, barbeque pits, a trash receptacle, and a restroom that is open during snow-free months. There is no running water.

A village site once existed along the banks of the lake near the midpoint.

The elusive little bird, the bluethroat, frequents this area. Look for its bright blue-colored throat on birds perched along the road into the campground. In summer, red-necked grebe, red-throated loon, long-tailed duck, and red-breasted merganser populate the lake.

The northern-most run of red salmon return here to spawn in mid-August. Mew gulls and glaucous gulls come to feed on spawned-out salmon, as do red foxes and the occasional grizzly bear. The best time to see a grizzly is in the early morning or late evening. Look for their tracks in the sand.

History of Salmon in Salmon Lake

In the early 1900s miners reported the shores of Salmon Lake were red with spawned-out salmon and people thought the fish were inexhaustible. But increased access to the lake - first by the Seward Peninsula Railroad, which ran along the south side of the lake, and eventually the road - led to continued over-harvest. Without nutrients from the decaying salmon carcasses, the lake wasn’t fertile enough to feed the young salmon fry. Decreasing salmon numbers in the 1960s resulted in increasingly lower catch limits for subsistence salmon fishing, and in 1972 Salmon Lake was closed to salmon fishing during the spawning season.

In 1997, the Norton Sound Economic Development Corporation, the Alaska Department of Fish and Game and the Bureau of Land Management began working cooperatively to make more food available for young red salmon by increasing the nutrient levels in Salmon Lake. By 2004 a record-breaking run of red salmon had returned to the lake and, for the next several years, the runs provided additional fishing opportunities along the Pilgrim River. A severe downturn in returns at the end of the decade, however, resulted in new fishing restrictions and a renewed restoration effort.

Locals call this area Broad Pass. Glaciers sculpted the land, forming ridges and rock piles as they advanced (moraines) and leaving rocky rubble on the valley floor as they retreated. The soil is shallow, rocky, and well drained. It supports dwarf tundra vegetation typically found at higher elevations. Notice how close together the tripods that mark the winter snow machine and dog team trail stand. The winter winds blow fiercely through here! Scan the large outcrops high on the slopes to your left facing north for raptor nests.

Look across the valley to the base of the far hills and you can still see the old train trestle spanning Iron Creek just above its confluence with the Pilgrim River. 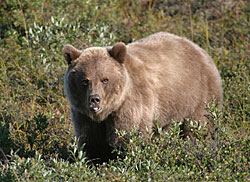 The pass derives its name from its position between the gold-bearing creeks and rivers to the south and the Pilgrim and Kuzitrin Rivers to the north where there was little gold. Looking east, a low wide pass leads to the upper reaches of the Niukluk River, which flows southeast toward Council, White Mountain, and Norton Sound. This pass has been a migration corridor into the Pilgrim River drainage for the Western Arctic caribou herd in years when they winter on the central Seward Peninsula. During summer months herders bring domestic reindeer to graze on open range land.