You are here: ADF&G Home » Trapping
Sign in
myADF&G

Are Fishers Moving into Alaska?

This fisher, the first documented in Alaska, was trapped near Juneau in 1997 and donated to the Department of Fish and Game.

In the late 1990s, a Juneau trapper astonished longtime state wildlife biologist Steve Peterson with an animal Peterson had never seen. It was a fisher.

The fisher is a relatively large member of the weasel family, bigger and heavier than a marten but smaller than a wolverine. Alaska has not been considered to be home to fishers, but in recent years, five of these animals have been documented in Southeast Alaska.

The fisher Brad Nelson showed Peterson in January 1997 marked the first documented case of a fisher in Alaska. Nelson caught the big weasel in a trap set for marten about 20 miles northwest of Juneau, in the Eagle River area. Since then, three more fishers have been trapped in that same area, and one other just south of there. The fifth was trapped on the Grizzly Bar on the Taku River just south of Juneau.

Peterson suspects that animal was probably not literally the first fisher in Alaska. A fisher skull was found up the Taku River south of Juneau in 1994 and turned in to the University of Alaska, and Peterson had heard second-hand stories of fisher encounters.

Because there is no open season for fisher, any animal trapped becomes state property. A trapper who caught a fisher and wanted to keep the skin might keep it quiet, Peterson said.

"They may have always been here, just in small numbers," Peterson said.

Peterson, a trapper himself, served as the state's furbearer biologist until he retired in 2003. Biologists Neil Barten and Ryan Scott share Peterson's interest in the apparent expanding range of fishers. They both work in the Juneau area.

Barten said he's heard reports of fishers on the Taku River near the Canadian border, including photographs of one animal near Canyon Island on the Alaska side of the border. Barten has also seen what looks like evidence of fisher kills near Juneau. Fishers are skilled at killing porcupines, and are one of the few animals that will target the prickly rodents. They bite at the face to injure and disable the animal, then flip it over and tear open the belly.

Barten knows wolverines and other predators will sometimes attack porcupines, but he suspects fishers are at work.

"I do a lot of hunting and hiking up Sheep Creek (just north of Taku Inlet), and every year I come across one or two porcupines all stretched out with their faces mangled," he said. "It looks like fisher predation. I've also seen them up on the Windfall Lake Trail, that same fisher kill pattern."

Fishers are found in mixed coniferous and deciduous forests across northern North America, from Maine to British Columbia, and as far north as the Yukon-British Columbia border. Trapper Pete Beattie, based in Whitehorse, trapped marten and other furbearers in the Yukon Territory north of Mayo for more than 25 years, from the early 1970s to the late 1990s, and never saw any fishers. 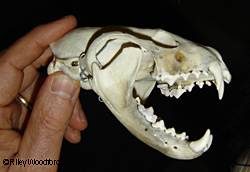 The skull of a fisher from New England. Fishers are found across the Northern U.S. and Canada, but have only recently been seen in Alaska.

"They are more common in British Columbia," he said. "I think they're occasional visitors to the southern Yukon, around Watson Lake."

The upper Taku, Stikine and Unuk Rivers, in British Columbia, are far better fisher habitat than the coast, Peterson said. The river corridors provide routes to the coast from the Interior, and the transition between the Interior and Coastal environments is striking as one travels down the rivers. The coast of Southeast Alaska is right on the fringe of fisher habitat.

But Eagle River, where two of the four fishers were trapped, is 30 miles north of the Taku. Peterson thinks the animals, or their ancestors, came down the Taku and then worked their way north.

"I doubt it walked across the icefield," Peterson said.

Despite these few recent fishers, Peterson does not see these animals flourishing in Southeast Alaska. "The fisher is never going to be a major species in Southeast, it's just not the habitat. This is more marten habitat."

It's not surprising that a few animals would make forays into new areas. It's just dispersal, Peterson said. When populations build up in an area, animals, especially juveniles, are under pressure to find their own territories and homes.

Peterson said the area around Tok — a mix of conifer and deciduous forest — is probably suitable fisher habitat. But although Interior Alaska does offer potential fisher habitat, there are no fishers there. Peterson thinks fishers may not have suitable habitat between British Columbia and Interior Alaska to enable them to expand their range. It's also possible that rivers and mountains create barriers. Fishers do not travel well in deep snow and are not good swimmers. Despite their name, fishers do not eat fish.

According to the Connecticut Department of Environmental Conservation, the name fisher may have been derived from "fitch," the European polecat, a species familiar to early settlers to New England who may have seen a resemblance or mistaken the fisher for the polecat. In French, the pelt of a polecat is called "ficheux," or "fichet," names similar to "fisher." Fishers are also called "fisher cats" in New England.

Update: Around 2012 an open season was created for fishers, in part to encourage reporting. The season, on the Southeast Alaska mainland (Game Management Unit 1) runs Dec. 1 — Feb. 15, and there is an annual limit of one animal. Any fisher caught must be reported (sealed) within 30 days of the close of the season. Between 2013 and spring of 2017, trappers reported catching 12 fishers on the northern Southeast Alaska mainland.