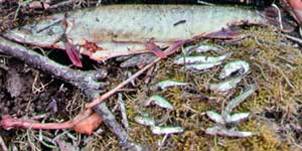 It is the Alaska Department of Fish and Game's (ADF&G) legal responsibility to "protect, maintain, and improve the fish, game, and aquatic plant resources of the state and manage their use and development in the best interest of the economy and well-being of the people of the state consistent with the sustained yield principle". The spread of invasive species is a growing concern throughout Alaska. Invasive species threaten fisheries resources and the economies that rely on them. Rotenone is a safe, proven and effective tool for eradicating populations of invasive fish.

In Southcentral Alaska, the Department has concerns about invasive northern pike. ADF&G has discontinued stocking many lakes due to illegally-introduced pike populations. Northern pike are a prized and valued subsistence and sport fish where they naturally occur in Alaska. However, when introduced to waters outside of their natural range, pike can quickly decimate salmon and trout populations. Generally, when pike become established in shallow lakes in Southcentral, they decimate populations of all the other fish in the lake. This has been documented many times in area lakes. This not only reduces opportunity for anglers to fish for trout and salmon, but more importantly, increases the chances that pike will further spread into nearby streams. The Department is very concerned about invasive pike impacting Alaska's wild salmon and trout and the potential consequences to Alaskans who rely on those resources. The Department is trying to prevent further spread of invasive northern pike to protect our salmon and trout resources and eventually reclaim fisheries that have been destroyed by pike.

ADF&G has a management plan for invasive northern pike (PDF 1,236 kB) that describes the Department's step-wise approach to addressing the pike problem and lists potential management actions that will be considered. Decisions are made on a system by system basis. Initial management actions include liberalizing sport harvest and implementing control netting programs. However, where preliminary actions like these have not successfully controlled invasive pike populations, the plan guides the Department to employ more aggressive methods such as draining the water body or using a chemical treatment such as rotenone to remove the invasive pike. Draining and chemical treatment are the only proven ways to completely eradicate invasive fish. In most cases, chemical treatment is a far more efficient and practical method than draining.