The United States has a population of wild wood bison for the first time in more than 100 years.

On Friday, April 3, 100 wood bison which had been kept in temporary pens near Shageluk, Alaska, for just over a week were lead by Alaska Department of Fish and Game Biologist Tom Seaton across the Innoko River to freedom.

Bison Biologist Seaton opened the gates to the temporary pens and called the bison to follow his snowmobile across the Innoko River to sedge and grass meadows in the Lower Innoko/Yukon Rivers area which will become their new home. Bison galloped behind the snowmobile all the way across the river to the sedge meadow, a distance of nearly a mile.

The bison had been conditioned to follow a snowmobile distributing food pellets at the Alaska Wildlife Conservation Center (AWCC) where they have been cared for over the past decade.

Each of the 100 wood bison is wearing a radio collar. The herd will be intensively monitored over the next two years to learn where it roams and what their effects on the habitat will be.

The animals ranging in size from about 200 lbs to more than 1300 lbs, were placed in special shipping containers at AWCC March 22-24, trucked from Portage to Anchorage International Airport, and flown about 340 miles west to the village of Shageluk. The area was chosen for the wood bison restoration program because it provides excellent habitat and has strong public support.

Though lesser known than plains bison, wood bison flourished for thousands of years in Alaska and Canada, but disappeared from Alaska in the 1800s-early 1900s. Since 2003, the small herd has been growing at AWCC in Portage waiting for this reintroduction. ADF&G is planning to barge some adult bulls from AWCC out to the same area later this summer.

“The animals acclimated to Southwest Alaska very quickly and calmed down from the stress of travel within a week,” said Division of Wildlife Conservation Regional Supervisor David James. “The dream of wild wood bison that has been growing for the last two decades is now a reality.”

ADF&G staff followed protocols developed in Canada for a “soft release” of wood bison. “Rather than release them when they arrived in Shageluk, we held them until the stress of transportation subsided and then we lured them with a trail of food to sedge meadows a few miles away,” Seaton explained. “There is a lot of habitat in the Innoko region, and it is very exciting to think about what kind of resource this bison herd could be in a few decades.”

“We needed to get the cows out to the meadows before calving, which will happen in May, because calving should anchor them to their habitat,” Seaton added. About half of the adult cows are pregnant.

A small herd of wood bison remains at AWCC, where people can see and learn about these majestic animals.

“We’ve enjoyed caring for the herd, but it’s good to know they’re now free. We’re pleased to have played a role in bringing back a species from extinction,” said AWCC Executive Director Mike Miller.

Wood bison inhabited Alaska and northwestern Canada for thousands of years. Their numbers declined in the 1800s and they were declared extinct but a small herd was discovered in Canada in 1957. From that herd, conservation efforts have resulted in about 5,000 disease-free wood bison in seven wild herds in Canada.

Skeletal remains of wood bison and oral histories from some Alaska Natives in the eastern Interior show that wood bison disappeared from the state within the past 200 years, likely from a combination of habitat change and unregulated hunting. Wood bison were last sighted in Eastern Alaska in the 1920s.

Wood bison are grazers, which has been an empty niche in the boreal forest ecosystem in Alaska since bison disappeared. Wood bison are a slightly larger subspecies than the plains bison which roam the Continental 48 plains states, and are larger and more adapted to northern areas.

The Alaskan herd of wood bison has been maintained and grown under the supervision of the Alaska Wildlife Conservation Center staff since 2003.

The Alaska Wildlife Conservation Center is a 501 (c) (3) corporation dedicated to conservation, education, and quality animal care of Alaska’s wildlife. For more information about the center, visit: http://www.alaskawildlife.org/.

For more information on bison in Alaska, visit: http://www.adfg.alaska.gov/index.cfm?adfg=woodbison.main. 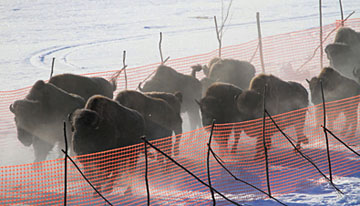 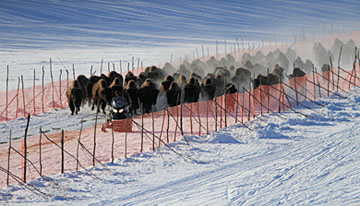