You are here: ADF&G Home » Species » Living With Wildlife » Living with Bats
myADF&G 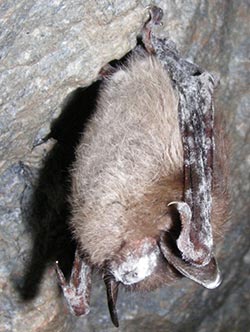 White Nose Syndrome (WNS) is a disease that affects hibernating bats. WNS does not affect humans. The disease was named after the white fungus found on the noses of most infected bats. The first known case of WNS appeared in New York in 2006. The disease has since spread across eastern and Midwestern North America. Scientists estimate that over six million bats have died of WNS. At some cave sites, nearly 100% of the bats have died.

Although WNS has not been found in Alaska — yet, on March 11, 2016, a little brown bat with WNS was found by hikers just 30 miles east of Seattle, Washington. Humans most likely played a role in spreading the fungus to Washington, either by transporting the fungus on clothing or caving gear or accidentally transporting an infected stowaway bat in a boat or vehicle. Bats are excellent "hitchhikers" and have been discovered in almost every type of boat from sailboats, tour boats, and fishing boats to cruise ships and cargo ships, as well as in rail cars, and the cockpits and cabins of airplanes. Two bats have even tried to hitch a ride into space on the outside of the space shuttle!

You can help prevent stowaway bats by shaking out tarps and vehicle covers and checking gear and storage areas when taking campers, boats, trailers, and RVs out of storage in the spring. If you find a bat your disturbance may be enough to cause it to fly away, but be aware that bats may take a while to "wake up" if they are hibernating or in torpor. If the bat does not leave within an hour of being uncovered, please see the Sick or Dead Bats page for further instructions. When traveling, please check campers (particularly the 'pop-up' variety), tents, umbrellas and awnings before leaving your campsite. If you find a bat that you suspect hitched a ride, please contact us immediately.

Because most western bat species do not hibernate in large numbers in caves and mines the way they do back east, detecting and monitoring the spread of WNS in the West is going to be a challenge. You can help! If you find a dead bat in the winter or early spring (November – early May), please contact ADF&G immediately. If you have bats in your home or outbuilding, please complete our online bat observation form.