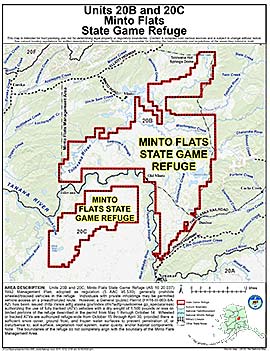 To view the refuge management plan and General Permits for a complete description of areas authorized for vehicle use, contact ADF&G Fairbanks office 907-459-7289 or visit http://hunt.alaska.gov

Note: The boundaries of the refuge do not completely align with the boundary of the Minto Flats Management Area.

Restrictions: Minto Flats State Game Refuge 1992 Management Plan, adopted as regulation (5 AAC 95.530), generally prohibits wheeled/tracked vehicles in the refuge. Individuals with private inholdings may be permitted vehicle access on a preauthorized route. However, a General (public) Permit (FH16-III-003-SA-A2) has been issued (http://www.adfg.alaska.gov/index.cfm?adfg=uselicense.gp_specialareas) authorizing the use of fully tracked (ATV) vehicles with a dry weight of 1,500 pounds or less on limited portions of the refuge described in the permit from May 1 through October 14. Wheeled or tracked ATVs are authorized refuge-wide from October 15 through April 30, provided there is sufficient snow cover, ground frost, and frozen water surfaces to prevent penetration of, or disturbance to, soil surface, vegetation root system, water quality, and/or habitat components.

Return to the list of State Refuges With Restrictions