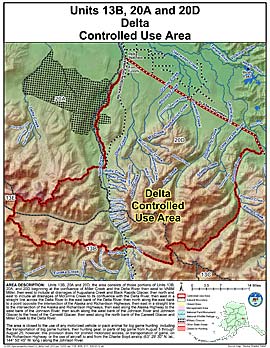 Map of Delta Controlled Use Area

Restrictions: Closed to the use of any motorized vehicle or pack animal for big game hunting, including the transportation of big game hunters, their hunting gear, or parts of big game from August 5 through August 25; however, this provision does not prohibit motorized access, or transportation of game, on the Richardson Highway, or the use of aircraft to and from the Charlie Boyd airstrip (63° 29' 30N. lat., 144° 50' 45"W. long.) along the Johnson River