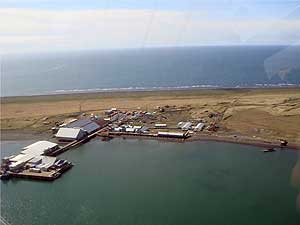 The Gene Conservation Laboratory conducts inseason mixed stock analyses of catch samples from the Port Moller Test Fishery to provide stock-specific abundance information to area managers and the public. The Department, in collaboration with the Bristol Bay Science and Research Institute and area processors, conducts this test fishery. The test fishery occurs along the southern portion of a transect between Port Moller and Cape Newenham that is believed to lie perpendicular to the migration of sockeye salmon returning to Bristol Bay. The test fishery is believed to capture sockeye salmon approximately one week before they arrive at the inshore fishing districts of Bristol Bay and has been used since the 1980s as an inseason predictor of inshore abundance, fish age structure, sex, and length. Beginning in 2005, samples of fins have been collected for use in genetic analyses.

The test fish boat typically fishes five stations heading offshore, anchors at sea for the night, and fishes another five stations returning to Port Moller on the second day. These fin clips are shipped to the lab as soon as possible (typically on day three after the vessel originally left Port Moller) and are picked up by lab staff on the morning of day four. The lab is geared for rapid laboratory and statistical analyses of the incoming samples, and estimates of stock composition are made available to fishery managers and the public on the morning of day five, approximately two days before fish represented by the sampled fish are expected inshore. Over the years we have observed some consistent trends in stock composition: Sockeye salmon originating from the Ugashik and Egegik drainages are more often captured at inshore stations while Westside stocks are more often captured further offshore; some stocks migrate through the test fishery early (Nushagak, Egegik) and others late (Ugashik, Alagnak). 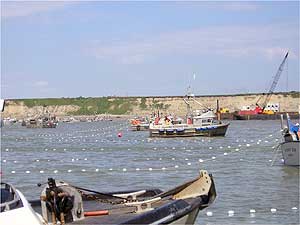 The Bristol Bay commercial sockeye salmon fishery is the largest in the world. A key to the success of this fishery has been conservation of biodiversity and sound, conservative management based upon the sustained-yield principle. The department manages Bristol Bay salmon fisheries to meet escapement goals. These escapement goals are determined by the relationship between the numbers of fish that spawn (escapement) and how many return from those spawners (total return=catch + escapement) for each stock. In order to get a complete catch estimate, stock-specific catch estimates for all the fisheries are required.

The commercial fishery takes place in five terminal fishing districts (Figure 2) that are designed to harvest salmon shortly before they escape the fishery to spawn future generations. While three of these districts each contain one major drainage of Bristol Bay and have been assumed to only harvest that stock, two districts drain three major rivers and are mixed stock fisheries. Accurately estimating the stock composition of catch within the fishing districts is critical to determining the total run of each stock, especially considering that some stocks can be exploited at rates up to 80%. 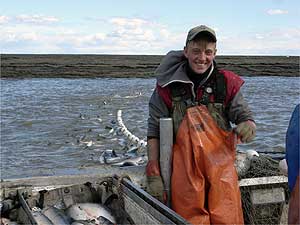 Since 2006, the Gene Conservation Laboratory has produced postseason estimates of stock compositions of sockeye salmon harvested in commercial salmon fisheries by district within Bristol Bay and applied these to the harvest numbers. Similar to estimates from the Port Moller Test Fishery, these estimates are based upon the relationship between SNP data in the baseline and catch samples. Over the course of these years we have observed some stable patterns in stock harvest: over 99% of sockeye salmon harvested in Bristol Bay were produced from rivers within Bristol Bay; the majority of sockeye salmon harvested within each district originated from rivers within the same district; and Eastside stocks (Ugashik, Egegik, Naknek, Alagnak and Kvichak) are rarely caught in Westside districts and vice versa. We plan to continue the Bristol Bay program into the future to provide additional years of stock composition estimates.