Extending along the eastern shores of Cook Inlet from Cape Kasilof south to Happy Valley, Clam Gulch Critical Habitat Area was established in 1976 to ensure that the public continues to have the opportunity to enjoy its prolific razor clam beds. In 1985, an estimated 30,000 user-days of effort were directed toward clam digging between Cape Kasilof and Anchor Point, with an estimated harvest total of over 1,000,000 razor clams. Major access points to the beaches can be found at a half dozen points, some better developed than others. The Clam Gulch Road, Ninilchik Village, and Deep Creek Wayside are the best developed and most popular access points. 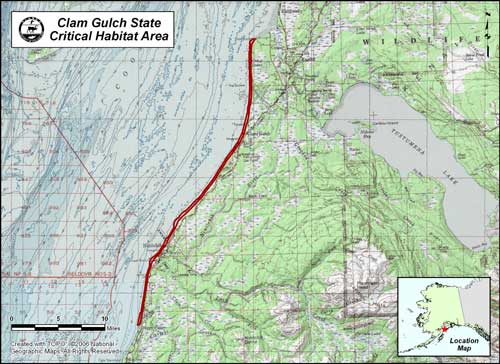