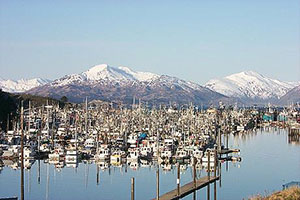 The Kodiak Management Area encompasses the waters of the Western Gulf of Alaska surrounding the Kodiak Archipelago and along that portion of the Alaska Peninsula that drains into Shelikof Strait. This includes Chirikof Islands. The Kodiak Island Borough encompasses 6,559 square miles of land and Kodiak is the largest Island in Alaska. The major communities include Akhiok, Chiniak, Karluk, the U.S Coast Guard base near the city of Kodiak, Larsen Bay, the city of Kodiak, Old Harbor, Ouzinkie and Port Lions. In 2009, the population estimate for the Kodiak Island Borough was 13,860.

The economy of Kodiak Island area has been based primarily on fishing industry since the early 1800's. Thriving, year-around commercial fish harvesting and processing continues to employ the majority of area residents. Important subsistence fisheries in the area include salmon (all five Pacific species), halibut and shellfish fisheries. Commercially various salmon species, King crab, pollock, cod, and other species are harvested by both local and non-resident fishermen and processed in local facilities. Kodiak is the home harbor for hundreds of fishing fleets. It also continues to be in the top 4 for the largest fishing ports in the United States in terms of volume of seafood caught, and the monetary value. In 2009, commercial fisherman unloaded 282.9 million pounds of fish and shellfish at the port of Kodiak. The total value of this catch was $103.8 million.