You are here: ADF&G Home » Hunting » Elk
Sign in
myADF&G

Roosevelt elk (Cervus canadensis) in Alaska originated from a transplant of eight calves captured on the Olympic Peninsula of Washington State in 1928 and moved to Afognak Island in 1929. Elk can now also be found on neighboring Raspberry Island. In Southeast Alaska, elk were transplanted to Etolin Island near Petersburg in 1986 and can now also be found on neighboring Zarembo Island. Fossil bones indicate that a subspecies of elk once existed in Interior Alaska during the Pleistocene period.

Elk are members of the deer family. They are much larger than deer, but not as large as moose. Males have antlers, which in prime bulls are very large and sweep gracefully back over the shoulders with spikes pointing forward. Bull elk on Afognak Island are estimated to weigh up to 1,300 lbs (591 kg). Cow elk are similar in appearance to bulls, but they are smaller and lack antlers. A 1,300-lb (590-kg) elk will dress out at about 800 lbs (363 kg). Of this amount, about 450 lbs (204 kg) is usable meat.

Elk are hardy animals whose large body size and herding tendencies require tremendous amounts of food. From late spring to early fall, with a wide variety of food available, elk are mainly grazers, using grasses, forbs, and other leafy vegetation. By late fall they become browsers, feeding on sprouts and branches of shrubs and trees. 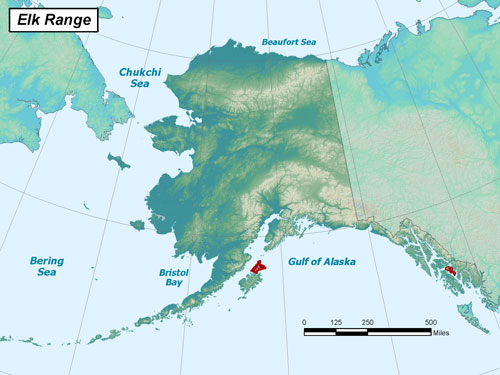 Elk hoof is larger and rounder than deer, and smaller than moose with a narrow gap within the inner hooves.