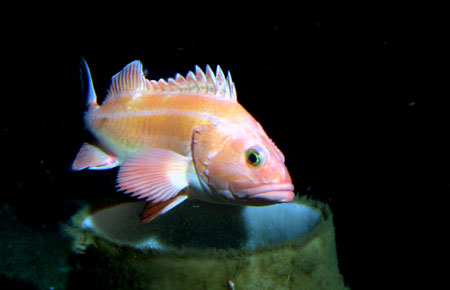 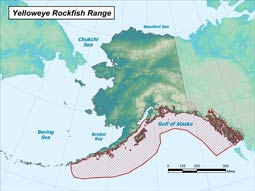 Yelloweye that live in areas with a dark background often develop a dark brown-red back and sides with a red-orange belly.

Brilliantly colored from orange-yellow to orange-red, yelloweye rockfish are one of the most well-known and prized of Alaska’s rockfish species. Deserving of their name, yelloweye are easily recognized by the bright yellow of their eyes. Individuals have been known to grow up to 36 inches which makes them one of the largest of rockfish species. A lighter colored line is usually distinguishable along the lateral line of the body and fins are often tipped in black. Yelloweye have several small spines on their head and a raspy ridge is found on the heads of large adults. Juveniles look very different from adults with dark red-orange coloration and two white stripes along the body. Fins of juveniles can be tipped in white or black.

Yelloweye are often called red snapper, but should not be confused with the red snapper found in the Gulf of Mexico, which is a different species. Other names for yelloweye include Pacific red snapper, red rock cod, and yellow belly.

Females produce a large number of eggs (up to 2,700,000) and give birth to live larval young. Larval release occurs between February and September. Larval yelloweye may be dispersed over a wide area as they drift with ocean currents. Their survival is affected by ocean conditions such as temperature, currents and the availability of food. Only a small percentage of larval yelloweye will survive to reach maturity.

While in the larval stage, yelloweye feed on algae, other single-celled organisms, and small crustaceans. As they grow to adulthood, yelloweye shift to a variety of prey including other rockfish, sand lance, herring, flatfishes and crustaceans.

When yelloweye larvae are born, they are carried with ocean currents and eventually settle onto the ocean floor where more protection from predators can be found. As juveniles mature they will move into deeper water habitat. Adult yelloweye, like many species of non-pelagic rockfish, have small home ranges. Some may live their entire adult life on a single rock pile.

Yelloweye are found along the western coast of North America from the Aleutian Islands to the Baja Peninsula. Adults are often solitary and inhabit steep rocky areas with nooks and crannies that they can seek shelter in. Usually found near the bottom, yelloweye rarely venture far from shelter. They are most commonly found between 300 ft and 600 ft but have been found in water as shallow as 48 ft and as deep as 1,800 ft.

Non-pelagic rockfish, including yelloweye, are extremely vulnerable to overfishing. While yelloweye rockfish stocks are considered healthy in Alaskan waters, careful management will be needed to protect the sustainability of yelloweye for the future. Yelloweye rockfish on the west coast were declared overfished by the National Marine Fisheries Service in 2002, and are currently under a rebuilding program. Some areas of the West Coast have experienced dramatic declines in yelloweye populations. In April of 2010, yelloweye in the Puget Sound/Georgia Basin were listed as a threatened under the Endangered Species Act. These declines in yelloweye populations were largely attributed to overfishing.

Another contributing factor to the vulnerability of yelloweye is the lack of a vent on their swim bladder (a balloon-like organ used to adjust buoyancy). Without venting, yelloweye brought from up from depth can suffer injury as air in the swim bladder expands. This often leads to bulging eyes or the stomach protruding from the mouth, in addition to unseen internal injuries. With an inflated swim bladder, yelloweye cannot readily submerge, and if released are subject to predation while floating on the surface. Puncturing the stomach as it protrudes from the mouth gives the appearance of helping yelloweye by allowing them to submerge, but this practice is strongly discouraged as it usually results in delayed mortality. Because of the low survival rates of released yelloweye, catch and release fishing is strongly discouraged.

Alaska Department of Fish and Game has been conducting research on the effectiveness of devices which allow rockfish to be released at depth. Preliminary results have shown promise for increased short term survival. However, further research is required in order to examine long term survival. Anglers are encouraged to avoid rockfish habitat when fishing for other species and to keep baited lures off of the ocean floor. In Prince William Sound and Southeast Alaska anglers must retain all non-pelagic rockfish caught until the bag limit is reached.

Demersal shelf rockfish provide an important commercially fishery in Alaska, and yelloweye are the primary demersal species harvested. The majority of yelloweye are harvested as bycatch, especially in the halibut longline fishery.

Yelloweye, among other bottom dwelling species, have a long history of being harvested for subsistence purposes. Hooks are baited and allowed to sink to the ocean floor where lingcod, halibut, rockfish and other species of fish are captured. Typically, subsistence longlines are used for this purpose where multiple hooks are attached to a single line and laid along the ocean floor. The majority of subsistence harvest of rockfish occurs in Southeast Alaska.

Yelloweye are excellent table fare and are prized by sport anglers. Due to the high mortality of non-pelagic rockfish brought up from depth, catch and release is strongly discouraged. In Southeast Alaska and in Prince William Sound, anglers are required to retain all non-pelagic rockfish until the bag limit is reached. When sport fishing, be sure to check the bag and possession limits along with any special restrictions for the area you intend to fish.

There are a variety of tools that are used by managers to monitor yelloweye populations and estimate human induced exploitation (you can read more about these under the research tab). As research continues to contribute to our understanding of yelloweye, managers will use the best scientific information available to manage this species. Because yelloweye are included among federally managed groundfish species, the management of yelloweye consists of a composite of federal and state authority.

While the Alaska Department of Fish and Game provides management and conducts research, the Alaska Board of Fisheries is given the responsibility to establish regulations including the distribution of benefits among subsistence, commercial, recreational and personal use user groups. In this way, responsibilities are divided between these two state entities in order to manage Alaska’s fisheries for the maximum benefit of the people of the state, under the sustained yield principle.

Research projects are taking place around the state of Alaska, which seek to enhance our understanding of yelloweye and other species of rockfish. These projects will aid us in the management of yelloweye as we grow to understand more about their habitat, life history, and monitor harvest levels.

A stock assessment for demersal shelf rockfish (including yelloweye) is published annually for the southeast outside area in conjunction with the North Pacific Fisheries Management Council. This report details: population trends, harvest information, surveying methods, estimated exploitable biomass and other information applicable to the management of yelloweye. For this assessment, a manned submersible is used to perform line transect surveys and directly observe yelloweye density. The density estimates are then applied to available habitat data (established by habitat mapping) in order to estimate abundance. In southcentral Alaska, remote operated vehicles have been used to perform similar transects to estimate yelloweye densities. As the quantity and accuracy of habitat mapping increases biologists will be better prepared to monitor the abundance of yelloweye and other groundfish species.

The landed catch of yelloweye is monitored in commercial fisheries and sport harvest is estimated through the statewide harvest survey, creel sampling, and the charter logbook program. Catch sampling is conducted in selected commercial and sport fisheries allowing for a variety of data to be collected including: species composition, size, age, sex, and the spatial distribution of harvest.

Another noteworthy project includes the research Alaska Department of Fish and Game has been conducting to measure the effectiveness of devices which allow rockfish to be released at depth. It is the hope that these devices will reduce the mortality of incidentally caught non-pelagic rockfish. Preliminary results have shown promise for increased short term survival of yelloweye rockfish. However, further research is required before we can be certain of long term effects on growth or reproduction. The most effective way to limit unintentional catch of yelloweye and other non-pelagic rockfish is through avoidance of rockfish habitat. Anglers are encouraged to avoid rockfish habitat when fishing for other species and to keep bait or lures off of the bottom.

There are a number of ways to get involved in the regulatory process for yelloweye rockfish. Since yelloweye rockfish are jointly managed through the North Pacific Fishery Management Council (NPFMC) and the State of Alaska, you may get involved at both the state and federal levels by attending Alaska Board of Fisheries (BOF), NPFMC meetings, participating in local advisory committee meetings or writing proposals to the BOF.

NPFMC meetings are open, and public testimony - both written and oral - is taken on each and every issue prior to deliberations and final decisions. Public comments are also taken at all Advisory Panel and Scientific and Statistical Committee meetings.

Alaska Board of Fisheries

The Board of Fisheries meets four to six times per year in communities around the state to consider proposed changes to fisheries regulations. The board uses the biological and socioeconomic information provided by the Alaska Department of Fish and Game, public comment received from people inside and outside of the state, and guidance from the Alaska Department of Public Safety and Alaska Department of Law when creating regulations that are sound and enforceable. Proposed changes can be submitted by the general public. The public is invited to comment on proposals prior to deliberation through written or oral means. The public is also encouraged to participate in their local advisory committee. There are 81 committees throughout the state that provide recommendations to the BOF on a variety of issues.

For more information: Board of Fisheries