Speaking Out on Fish and Wildlife Issues 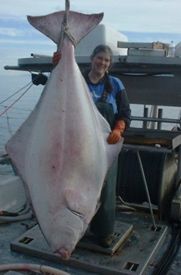 Commercial fisher Kathy Hansen serves as chairwoman of the Juneau-Douglas Advisory Committee for the Alaska Board of Game. Photo courtesy Kathy Hansen

Kathy Hansen is an everyday kind of gal with an above-average sense of responsibility. Hansen provides “from-the-field” recommendations to the Alaska Boards of Fisheries and Game. Hansen has been the chairwoman of the Juneau-Douglas Advisory Committee for two years and has served on the committee since 1999.

Advisory committees (AC) are grassroot volunteer groups that meet to discuss fish, wildlife and habitat issues, and receive community input. Public involvement is critical to the success of the Alaska Department of Fish & Game’s mission to protect, restore and sustain Alaska's fish and wildlife resources. Advisory committees throughout the state are an important way that the public is represented.

There are 81 ACs located in different geographic regions of the state, providing local recommendations to the Board of Fisheries and the Board of Game. AC members are nominated and seated through publicized local elections. AC members must represent fish and wildlife user groups in their area, maintain a residence in the AC area and be an Alaskan resident of voting age.

Hansen has fished commercially for close to 26 years, and she and her husband own and run their own boat during the fishing season. From early May to early October, their home is on the water. In addition to fishing and her AC work, she serves as the Executive Director for the Southeast Alaska Fisherman’s Alliance.

Hansen said volunteering on the Juneau-Douglas Advisory Committee fits well with her profession, and input from people with a vested interest is critical to the success of the department’s management goals.

“The advisory committee process is a really good process,” Hansen said. She believes the process is effective and works the way it is intended to, and she would like to get even more of the public involved. At times you can find Hansen putting up posters around town to get the word out about AC meeting dates and times. But it can be frustrating at times, she said. Public involvement peaks when a hot issue comes up and wanes after the issue has been dealt with. Hansen believes all the issues are important; that all decisions made will affect people’s livelihoods or use of resources - and that alone makes the process vital.

Hansen pointed to the Douglas Island wolf issue as a success story showcasing the AC process, an issue that brought out the full spectrum of views. In 2002, seven wolves on Douglas Island near Juneau were taken by a trapper, and public outcry ensued. Although wolves are found in the Juneau area, it was unusual that a pack had moved into an area so close to residences. People had enjoyed hearing howling at night and seeing wolf tracks. But some hunters were concerned about impacts on deer, and at least one trapper pursued the opportunity to legally take the wolves.

People were passionate in their positions, Hansen said, and absolutely immovable early on in the advisory committee meetings. The meetings included hunters, trappers, and representatives from wildlife protection groups. In the beginning, there were the two extreme positions: “ABSOLUTELY NO TRAPPING!” vs. “WIDE OPEN TRAPPING!” and thus, spirited discussions followed. About half way through Hansen said she noticed subtle changes. By the end everyone compromised something, and what they came up with went before the Board of Game at its November meeting (which focused on the Southeast region) in the form of Proposal No. 45.

“I’m proud of the product that came out of this,” Hansen said. "It was motivating to see the process work so well with such a volatile issue."

This kind of input and teamwork between the public and the Boards of Fisheries and Game helps provide for sustainable growth not only for the fish and wildlife resources themselves but also for the resource-dependant industries within Alaska.

Here is a brief synopsis of the State’s fish and game regulatory process:
* Call for proposals are made by the Board of Fisheries and the Board of Game.
* Proposals are received by the boards, published, and distributed across the state.
* There is a public comment period.
* The board meeting is held (which follows parliamentary procedure and includes ADF&G staff reports, public testimony and AC testimony.) With a few exceptions, these are open to the public during the entire process.
* Each proposal is either adopted, rejected, amended, deferred, or no action is taken.
* Adopted proposals are written into proper legal format and submitted to the Department of Law for review.
* Following legal review, regulations are sent to the Lt. Governor for filing and are generally enacted as official regulations on or before July 1.
* A Summary of Actions is prepared by Boards Support and is then distributed to interested parties.

To learn more about AC meetings near you, see the latest schedule at http://www.adfg.alaska.gov/index.cfm?adfg=process.jointboard