Bears, Birds, Walrus and More
Alaska Outdoors – What You Can Do in 2020 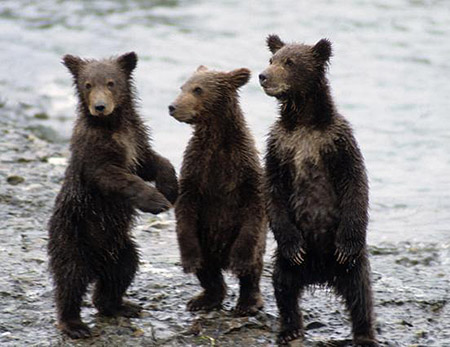 Alaska’s wildlife viewing and outdoor opportunities are open this summer, with modifications to accommodate for Covid-19 concerns. Some opportunities are close to urban areas, easily accessible and popular with Alaskans. Others are more remote and offer opportunities to watch wild animals such as bears and walrus, without fences or crowds. Alaskans appreciate these areas, but they are often destinations for visitors seeking a once-in-a-lifetime experience.

The Alaska Department of Fish and Game manages (and cooperatively manages) areas highlighted here; The National Park Service, the U.S. Forest Service and other public land managers are resources for information on the lands they manage.

Joe Meehan oversees the McNeil River bear viewing area and Round Island, where walrus gather, and he said both areas will be open for visitors this summer.

This wildlife sanctuary protects the world's largest concentration of wild brown bears. Scores of bears are drawn to the area in summer to feed on salmon. Located on the Alaska Peninsula about 250 miles southwest of Anchorage and 100 miles west of Homer, this roadless area accessed mainly by air.

Visitors fly out to the area and camp for several days – and no more than 10 people at a time are allowed between June 7 and August 25. A main camp with a kitchen and dining area is separate from the viewing areas.

“McNeil is going as scheduled and staff will be headed out in late May, with the first visitors scheduled to arrive June 6,” Meehan said. “We’re going to do the program as we always have. However, for both Round Island and McNeil we’ll be following both CDC and State of Alaska mandates and recommendations – in a nutshell that’s sanitation, social distancing, and screening.”

He said people will be asked if they have any symptoms, and staff will be watching for any signs of symptoms. “They’ll be screened before they come and when they arrive. We’ll be taking temperatures and monitoring for symptoms. The McNeil air carrier told us they’ll be screening and wiping down all touched surfaces every flight. They’ll require everyone onboard to have masks. The air carriers all have their own safety plans in place.” 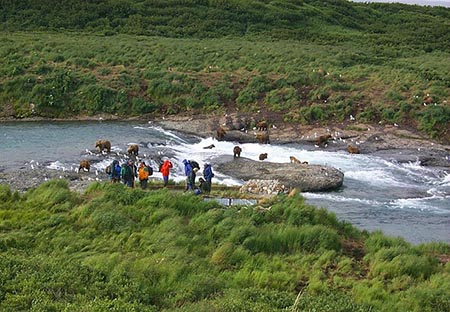 The viewing platform at the falls at McNeil River. ADF&G photo

Visitors to McNeil typically group up in several prime viewing areas and will be spaced appropriately far apart. They hike from the main camp to the viewing areas as a group. A big part of the longtime success of the area is that people behave in a predictable manner and bears learn that people are not a threat, a source of food, or competition for food. They are wild animals and department staff accompany visitors and encourage appropriate behavior.

“We don’t approach bears, but bears do sometimes approach people, and when that happens, we typically bunch up,” Meehan said. “But that’s not consistent with social distancing so we’ll cope with that, we’ll wear masks, and space out as best we can.”

Back at camp, measures will be taken to ensure risk of infection is minimized. Meehan said in the cook shack people will cook and eat in rotation, five at a time instead of 12 or 13 people at once. Everything will be wiped down, with sanitation supplies for the visitors as well.

“We’ll take the sanitation a couple steps beyond what we normally do,” Meehan said.

Permits are awarded through a lottery system. If there are cancellations, managers will offer the next people who applied the opportunity.

“There’s probably not a whole lot of out of state people coming up, even if the quarantine period is lifted,” Meehan said. “We expect a lot of Alaskans to be coming up this summer. They can. They drive to Homer and fly over, it’s not like flying up from Seattle.”

Round Island, in Southwest Alaska about 65 miles from Dillingham, offers unparalleled opportunity to view walrus and seabird colonies. It’s part of the Walrus Islands State Game Sanctuary, which protects one of the largest haul outs in North America for Pacific walrus. Like McNeil, visitors camp on the island for a few days in a designated time slot. Permits to visit are available on a first-come first-served basis, and Meehan said the time slots to visit are usually available. 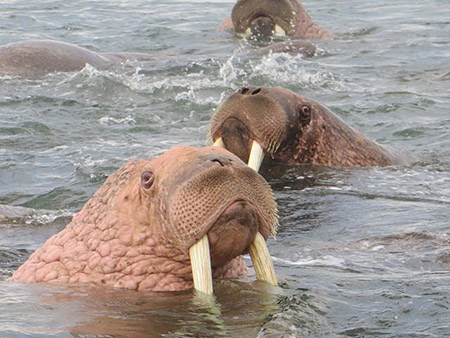 Walrus at Round Island. Photo by Maria Gladziszewski/ADF&G

“We keep a small staff there in the summer to monitor wildlife populations. We do walrus and sea lion counts, re-sight brands (document marked animals), and do sea bird productivity monitoring,” he said.

When visitors arrive, staff orient them to the facilities and help them get set up for camping.

“We don’t guide them,” Meehan said. “They’re on their own to walk the trails and watch the wildlife.”

“There is still one single boat transporting people out to the island, and he’s indicated he’s open,” Meehan said. “As we always say to people, make your transportation arrangements before getting your permit to go out to the island.”

“There is concern about people coming into small villages, so it’ll be challenging for people get out there, but if they do, we’ll be ready.”

Pack Creek is on the eastern shore of Admiralty Island about 30 miles south of Juneau. Within the Stan Price State Wildlife Sanctuary, the area provides protected habitat for brown bears while affording visitors an opportunity to view and photograph bears close-up. The sanctuary is cooperatively managed and staffed by the Alaska Department of Fish & Game and the U.S. Forest Service. Pack Creek permits are available online through Recreation.gov (or their toll-free number 1-877-444-6777), and permits must be obtained through this service provider or through one of the approved guiding companies. 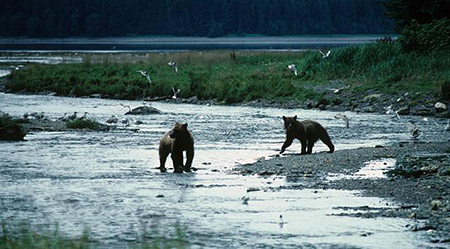 The sanctuary is open to visitors this summer. Bear-viewers come for a single day, typically arriving about 9 am and leaving in late afternoon. The maximum number permitted in a day is 24. Several Juneau companies provide daily floatplane flights with bear-viewing guides, primarily serving cruise ship travelers in town for a day; locals arrive with visiting guests, and independent travelers and some boat-based tour groups also visit.

Chad Rice, the Pack Creek program manager for Fish and Game, said there are several issues this season. A windstorm last August brought down a number of trees and damaged some of the tent platforms where staff sleep. In anticipation of low numbers of visitors in June, staff will focus on repairs. He hopes visitors will come during the prime viewing time, July 5 through Aug. 25, when salmon runs in the creek bring bears.

“I haven’t looked at the permit bookings at this point, I understand a lot have sold and they haven’t requested refunds yet,” Rice said. “Obviously with the cruise ships not coming we’re expecting fewer nonresidents, but we don’t know.”

He said 20 to 24 visitors a day is typical in a normal year during the peak eight weeks. Rice said he optimistically hopes they’ll see a dozen people a day this summer, perhaps more family groups. He’s working with the Forest Service to establish safety protocols, and the air carriers will also be following safety mandates, including requiring passengers to wear masks and disinfecting planes between trips.

“We don’t have outhouses and visitors aren’t touching surfaces we’d have to clean or disinfect,” he said. “We usually provide a spotting scope and we probably won’t do that this year, something everybody is going to touch and that we’d need to keep clean.”

The area is frequented by about two dozen brown bears. Rice said about half are regulars, seen daily or weekly at the viewing area. 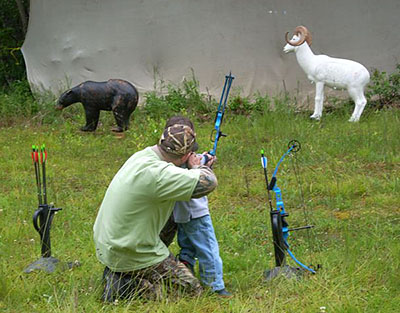 An archery activity at Potter Marsh Discovery Day. The annual event has been cancelled for 2020.

Southcentral Alaska offers dozens of areas for wildlife viewing. Several areas popular with locals are open with some changes and improvements - Potter Marsh near Anchorage and the Palmer Hay Flats State Game Refuge near Palmer.

“The facilities are open,” Joe Meehan said. “We’re being extra vigilant on cleaning, and once the hosts get on site they’ll be cleaning more, especially touched surfaces. We’re also installing hand sanitizers in more areas.”

Potter marsh, a 564-acre freshwater marsh, stretches for almost two miles between the Seward Highway and the Chugach Mountains. Family-friendly elevated board walks offer excellent bird and wildlife viewing opportunities. The annual “Potter Marsh Discovery Day,” scheduled for June 6 this year, was cancelled. Meehan said in past years, about 1,000 people attend the five-hour, one day event.

Palmer Hay Flats is 28,000-acre wetlands north of Anchorage, home to moose, beaver, muskrats and lots of birds. Popular in the fall with waterfowl hunters, it also offers boardwalks and trails, and canoeing and fishing opportunities as well. A new boat launch at Rabbit Slough improves access. A muddy and degrading de facto launch site was vastly improved and opened in May.

“We contracted through Alaska State Parks and now we have a concrete boat ramp,” Meehan said. “It’s much more conducive to launching a boat.”

The Rabbit Slough boat launch is located near the intersection of the Parks and Glenn highways, and can be reached from the Glenn Highway frontage road at the Trunk Road exit.

Other public access sites include Reflections Lake at milepost 30 on the Glenn Highway and Cottonwood Creek off Hayfield Road. More information of this refuge and the other refuge areas managed by the ADF&G is available online at www.refuges.adfg.alaska.gov. 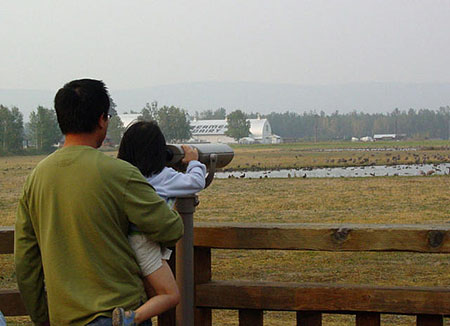 Further north in Fairbanks, Creamer’s Field is an 2,400-acre refuge that provides prime habitat to migrating waterfowl. Trails and boardwalks offer access for wildlife watchers and folks looking for a pleasant walk. Migratory birds come through in the spring and fall, and sandhill cranes are a highlight in late summer.

Refuge manager Ryan Klimstra said the refuge was busy this spring with both avian and human visitors. As of May, the birds have moved north to nest. “We don’t have the thousands of birds we did a week ago,” he said. “It’s a stopover, some of the birds are traveling all the way to the north slope and the Arctic coast.”

Klimstra said that while the refuge is open to the public, the small visitor center and facilities are closed.

“The refuge itself is open the public, and we had the busiest spring with visitors in a longtime, with people out of work and school,” he said. “We typically have a lot of education programs at the refuge. We’re modifying these programs, so they are social-distance friendly. Electronic, and more focused on individual activity and not groups and classes. Hopefully we’ll still have some of the programs.”

At this time, it’s unclear how the annual sandhill crane festival in August will shape up. Even if the usual activities and special events don’t occur, viewing will be open.

“We’re still playing that by ear,” Klimstra said. “We want to do it, but we don’t know what it might look like. It might be modified, not what it has traditionally been. But if things really improve, we could have a normal crane festival. The cranes will still come.”