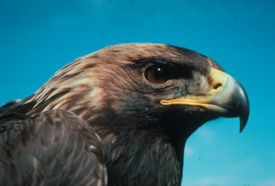 An immature golden eagle in Denali Park. Only 20 to 35 percent of young golden eagles survive their first year. Photo by Carol McIntyre

Alaska is home to the highest density of nesting golden eagles in North America, in Denali National Park. The big raptors are found throughout the state, but nesting pairs favor mountainous territory like the Alaska Range.

National Park Service biologist Carol McIntyre has been studying golden eagles in Denali for 17 years. She’s documenting reproductive success, and over the years she’s equipped 48 eagles with transmitters to study their seasonal migrations. About 70 to 75 pairs of eagles have territories in the northeastern portion of Denali.

Golden eagles in the Lower 48 maintain year-round territories, but most populations in interior and northern Alaska are migratory. Golden eagles spend mid March to late September in Denali. Most adult breeding eagles tend to return to the same summer areas and the same territory. Territorial pairs reunite, breed, and raise their young.

“Eagles are really long lived and they don’t breed every year,” McIntyre said. “They breed when it’s advantageous, when there’s enough food.”

McIntyre said that while traditional nesting areas are used for many years, it’s not clear if the same pairs remain together over their lifetime.

“I think some pairs probably stay together for a very long time and others don’t,” she said. “We don’t have any evidence for pair fidelity in Denali. Some do - it’s been documented down on the Snake River in Idaho, but some don’t.”

Golden eagles in Denali usually build nests on cliffs or rock outcroppings. The nests can be 5-feet square or as small as 18-inches wide and are built of sticks and lined with grasses, lichens and feathers. Nests are repaired and reused through the years, and most are decades - and sometimes centuries - old.

Young eagles make their first southern migration in late September, leaving Denali without their parents or siblings. Most follow the Rocky Mountains south, and winter anywhere from Central Alberta down into Northern Mexico.

“The highest mortality on eagles is during their first fall migration,” McIntyre said. Only about 20 to 35 percent of the golden eagles McIntyre has studied survive their first year, and only 10 to 15 percent live to reach sexual maturity at about five years of age. Most die from starvation, disease, predation, electrocution and illegal shooting. Golden eagles that survive may live 25 to 35 years in the wild. 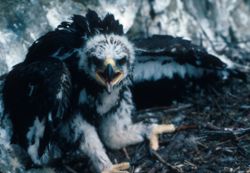 When the yearling birds return to Alaska, they can have a tough time making a living. They aren’t generally welcome to return to the areas where they were born.

“Nesting pairs are very territorial and will keep the immature birds out of the territory,” said Alaska Fish and Game biologist Steve Arthur. “I’d guess that’s even more so when food is scarce and hares are low.”

McIntyre said exposure to territorial adult eagles aggressively defending nest sites is a significant threat to the younger, inexperienced eagles. Most of the returning immature eagles spend their summers spread across northern and interior Alaska. Through her telemetry work, McIntyre found about 60 percent of the returning young birds fly past Denali and head up to the Brooks Range - and even further north - to the Arctic coast. Others spread out through the Central Alaska Range and down the Kenai Peninsula.

McIntyre said a new technique that allows researchers to extract DNA from shed feathers will be a major asset to her work in the next few years. Golden eagles are difficult to tell apart, and it’s important to be able to identify birds to document pair fidelity, seasonal movements and territorial behavior. Over the course of her research, McIntyre has visited hundreds of nests and taken blood samples, collected shed feathers and banded about 350 young eagles. Banding is an important tool for bird researchers, but its effectiveness is limited with golden eagles.

“Golden eagles have completely feathered legs – the feathers may even cover their feet – and you can’t see a band on the leg,” she said. “Extracting DNA from feathers is new technology that shows great promise. We can identify birds now, and over next five years we’ll visit nests and examine the turnover of breeding birds in the nesting areas.”

Although Denali is home to record numbers of golden eagles, they tend to be overlooked by visitors, said Fairbanks biologist John Wright.

“They’re a prominent part of the mountainous habitat, and on a bus ride in the park you can see at least five golden eagles, or more, maybe 10 to 15,” Wright said. “The bus drivers tend not to pay attention to them. Most people are looking for something on four legs, and here’s something that’s pretty big and deadly soaring right overhead.”