Alaska’s Most Powerful Bird of Prey 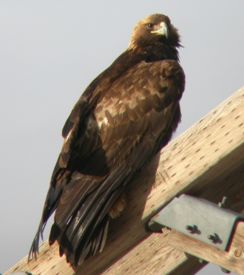 Golden eagles are formidable predators in Alaska. Bigger and more aggressive than bald eagles, golden eagles prey on young Dall sheep and caribou - and can take even larger prey.

“They’re built for killing,” said Fairbanks wildlife biologist Jack Whitman, who studied golden eagles in Idaho. “Comparing their physical strength and food habits to bald eagles, the golden eagle is an aggressive, successful predator, and the bald eagle is a really good scavenger. How often do you see a golden eagle at a garbage dump?”

Alaska Fish and Game biologist Steve Arthur found that golden eagles are significant predators of Dall sheep lambs in the Central Alaska Range. The lambs are born in late May and they’re very vulnerable in their first few weeks.

“The eagles - either soaring overhead or perched - constantly watch the bands of sheep, and if a lamb strays away from its mother there’s an eagle zooming in,” Arthur said. “They swoop down and try to grab it before it can get back under its mother.”

In defense, lambs hide beneath the ewes, and ewes will bunch up. In steep terrain, they’ll get under overhanging rocks and cliffs. Golden eagles can fly 80 miles an hour and even faster in a dive, but Arthur said they do best when they get a straight shot at their target - and sheep will use rough terrain to hamper the eagles’ approach.

Golden eagles will also team up to hunt, one eagle flushing out or chasing game so another can grab it. Arthur once watched a pair of eagles work at separating a ewe from her lamb.

“One would harass her until she’d charge off in that direction, and that would leave the lamb behind, then the other would come in at the lamb, she’d come back, always one working her, the other trying to grab her lamb. The poor lamb was just spinning in circles.”

Arthur said eagles will take lambs into late October, when they weigh more than 50 pounds, but it’s unusual. Most eagle predation on lambs takes place early in the season. Rodents, birds and small game are by and large the mainstay for eagles, and in many parts of Alaska, that’s primarily snowshoe hares. Hares are profoundly important to eagles, and indirectly, to Dall sheep.

Eagles and coyotes are the primary predators of Dall sheep lambs, but both predators are much more dependent on snowshoe hares. Hare populations fluctuate on about a ten-year cycle in the Alaska Range, and those cycles effect eagles’ reproductive success. Hares peak, crash over a two-year period, and then gradually increase over about eight years. Hare populations peaked in 1999, began declining in 2000 and hit bottom in 2001.

“We had low lamb survival when the hares were at their peak,” Arthur said. “My interpretation is that abundant hares lead to abundant predators, and when they’re abundant they’re not only eating hares, they’re eating lots of other prey.”

Arthur said there is a significant drop in predator reproductive success when hares crash, and basically they do not reproduce in years following the crash. “Residents can persist, but they're not able to reproduce successfully. They eat other types of prey that tide them over, but without that abundant source of protein can’t bring off a litter or a clutch.”

Golden eagles also eat Arctic ground squirrels, marmots, grouse and ptarmigan. They will take larger prey, like beavers and foxes and are capable of taking large birds like geese and cranes. In the Arctic, eagles are common predators of young caribou calves.

Ken Whitten, a retired Fish and Game research biologist, studied calf mortality in the Porcupine Caribou herd on the North Slope and Coastal Plain in the 1980s. Tens of thousands of calves are born in the spring, and Whitten and a veterinarian examined hundreds of calves to determine the various causes of death. He found that golden eagles rival bears and wolves as predators of caribou calves.

Early in the season, calf mortality was about 25 percent. About half was from predation and half from congenital defects - the calves were born dead or died shortly after birth. But predators were not simply scavenging or even targeting the weak and dying.

“We found that predators were not taking the weakest calves,” Whitten said. “We looked at (dead calves’) fat reserves, and predators were selecting for healthy calves. We hypothesized that in that environment, predators are hunting by sight, and they select a moving target rather than looking for one that’s already dead. There are so many calves up and walking. Even healthy calves are highly vulnerable to predators, they just have to find one away from mom.” 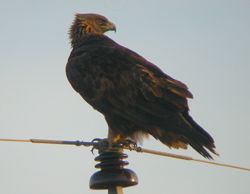 Denali National Park is home to the greatest density of nesting golden eagles in North America. Photo by Doug Backlund

The ways bears, wolves and eagles kill and eat caribou calves leave tell-tale clues. An eagle can carry a six- or eight-pound lamb, but it can’t carry off a 15- or 20-pound calf, and eats it where it lays without dismembering or skinning it the way bears and wolves do.

“Eagles tend not to flush off a kill, even if you land a helicopter near them, or fly over with a plane,” Whitten said. “But you see bloody-faced bears or wolves running away, or they may stand over it, or carry it off. They can eat a calf quicker. Eagles eat slower. They eat everything on one side, then flip it over, and it’s a lot easier to spot the carcass from the air.”

When eagles attack, they generally swoop down with their feet extended and talons out. Three front talons face forward and the back talon, called the hallux, comes in behind. They hit with one foot around the back of the head or neck, and the other foot by the shoulder. They strike and then clench their talons. The hallux can penetrate the shoulder blade of a newborn calf, and Whitten has seen deep puncture wounds that pierce the lungs.

“The calves bolt for their moms and stand under their bellies when an eagle flies over,” Whitten said. “An eagle can make a kill quickly, but it can’t defend the dead calf from the mother. Sometimes we’d see a cow standing over calf, with an eagle nearby on a tussock, waiting for the cow to move away. They’re patient, and eventually she’ll move on.”

“If a mother saw an eagle coming she’d try and defend her calf,” he said. “She’ll rear and strike at the eagle with her front feet, we saw that on several occasions. She’ll stand over the calf, and when the eagle’s in a stoop it can’t react too well.”

Most eagle predation on caribou happens in the calf’s first week of life, Whitten said.

“If they can get past the first three or four days they can react pretty fast, they’re pretty alert. They can outrun a person in just a couple days. Eagles have killed calves into July, when calves weigh 30 pounds or more, but they are much more opportunistic later when calves are bigger.”

Eagles may live 25 or 30 years, and like other top predators, experienced hunters develop techniques and strategies that may enable them to make ambitious attacks. Whitten said golden eagles have been documented taking adult pronghorn antelope, mule deer and caribou. But in the Arctic, Whitten found that adult and nesting eagles tended to target ground squirrels, and the young birds were more active in calving areas. Adults are better at defending territories that provide abundant rodents, Whitten said, leaving the more challenging work of killing calves to younger birds.

“Adult eagles have learned to kill larger game,” Whitten said. “But I think it’s an unusual learned behavior that a few individuals pick up.”

Bortje once came across an adult caribou in early April that had been killed by a golden eagle. Golden eagles migrate north in the spring, and he suspects this bird may have arrived on the North Slope a little early, before calving season, and was perhaps hungry and a bit bolder than usual.

“We saw the caribou with the eagle sitting on it, and we were able to back track and see how the whole scenario took place,” he said. “The eagle made multiple strikes. You could see the marks in the snow where the eagle had struck the caribou - it would fall and get up, and the eagle would land and then come at it again. We don’t know what condition of caribou was before, but I’ve seen these multiple strikes on yearlings, too.”

Bortje said in some cases eagles will make repeated attacks on an animal over the course of several days, wounding and sometimes blinding their prey before it succumbs.

“When they attack bigger animals, they like to go for the eyes,” he said. “For general hunting, a lot of time they grab the animal instantaneously, and the talons enter on both sides, between the ribs, and puncture the lungs. Then they sit and watch, and wait, or come back later.”