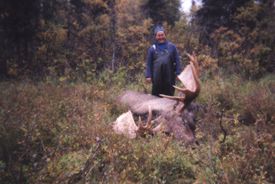 I sat in the small cabin with my good friend and coworker Joe Chythlook, listening as he explained nuances of his native Yup’ik language. I learned that “tuntu” is deer and “tuntuvak” is really big deer or what we gu-suk refer to as moose. That was what I was after, a really big deer.

It all started ten years ago when I first met Joe. Joe was just a really neat guy - an Eskimo, a bush pilot, a Bristol Bay fisherman, a Christian and a really interesting fellow with great stories about the old days and life in the bush. He lives in Southwest Alaska in Dillingham and I live in Southeast Alaska in Juneau, and our work with the Alaska Department Fish and Game brought us together. Every time I bumped into Joe he had dried fish strips or moose or caribou for me to try and it was always delicious. I brought him venison and king crab from Southeast Alaska, and we began trading subsistence foods. Over time, he began inviting me moose hunting.

As the years went by, I realized that Joe was approaching the age where he had to be thinking of retirement (now I know better), so I figured I better take him up on that moose hunt. We planned the hunt by e-mail and in early August I had my ticket to Dillingham, where we would begin our adventure. We’d be hunting in Wood-Tikchik State Park in Unit 17C, about 40 miles north of Dillingham as the crow flies, where Joe has a cabin on an island in Upper Lake Nerka.

Joe picked me up at the airport in Dillingham on Labor Day. After gathering my hunting gear and rifle from baggage we were off. Joe’s 18-foot skiff is suitable for whatever the lake gods have in mind, which on this trip was low water. Joe, however, is always prepared. When we got to the rivers with low water he would stop and pull up the 40HP Yamaha with a propeller and calmly lower its brother the 40HP Yamaha Jet. In no time at all we were past the fishing lodges and deep into moose country. Big moose country!

Every now and again we would motor to shore and examine the beaches for sign. Moose sign is easy to recognize because the hoof prints look like potholes in the tundra. Some tracks were so big you could bathe a small child in one. Soon I could see a small white cabin in the distance. Joe expertly maneuvered his skiff along the shore and through channels and before night fell we were unloading supplies and readying for a quick scouting trip.

We scouted several small bays and found a cow and a calf standing beside some old moose antlers on the shore across from his cabin. Things were looking good for a quick end to the hunt. Fortunately, that was not to be. For the next two days we hunted hard, traveling miles by skiff, looking in every bay and meadow for a legal bull moose with spikes, forks, three brow tines, or a 50-inch spread.

Each morning we prepared in the pre-dawn darkness near the cabin, hoping that a moose would materialize close to home. We watched the sun rise and listened to unseen flocks of ducks landing out on the foggy bay, and when moose did not appear we’d spend the rest of the day scouting the shore for fresh sign - warm moose pellets, crisp-edged tracks, and the freshest signs - tracks in the lake with silt still swirling in them. In the evening we hunted wherever we had found the most promising sign. We found plenty, but it appeared that hunting pressure and grizzly bears had the moose changing their habits quicker than we could figure them out.

The second night Joe said the moose were mostly hunted by locals and not many white men hunted in the area. Joe recommended that I should go Native. He prepared some Yup’ik Eskimo food to get me smelling right. We feasted on boiled red fish dipped in seal oil, fish strips, moose sausage, and pilot bread chased with black tea.

You also know Native food is going to be different than what you are used to, so keep the old rule of sausage in mind and don’t ask how it is made. I made this mistake after trying red fish with seal oil for the first time: “Slurp, Gurgle, Burp, Yummm! Hey, Joe, this spawned out sockeye isn’t too bad with a raw onion and some of this seal oil! Say Joe, how do you make seal oil?” Joe replied, “Well son, you take the seal blubber and put it in a jar. Later (he never said how much later) you scoop the oil which has risen to the top after the blubber has rendered a bit.”

I immediately stopped chewing and pretended that my Atkins diet allowed only two small servings of rotten fish drenched in seal blubber drippings. I also learned that they don’t have fresh lobster in Dillingham because when I asked Joe what red fish tasted like he insisted it tasted like lobster. Next time I see Joe I am going to treat him to a lobster dinner so that his palate is properly educated. But in all honesty, if I hadn’t eaten tons of fresh, nickel-bright salmon in Southeast Alaska, and if I hadn’t spent my formative years deep in Yankee lobster country, a.k.a. Rhode Island, I might have enjoyed the food more. But I can say now that I have eaten red fish and seal oil. If I had to live off the land I wouldn’t hesitate to eat it again…well, maybe just a moment’s hesitation. 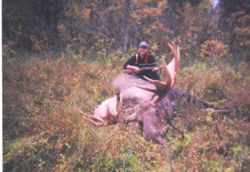 I learned lesson number two later that evening. I must preface this by stating that I am no girly-man when it comes to hot water. I’ve been in hot water most of my life! I have steamed everything from broccoli to king crab, but if you have not steamed with a Yup’ik Eskimo you have not steamed. The intense, searing heat I endured had to have defied the laws of thermodynamics. Wood just does not burn at the temperatures I suffered. I’m sure that Joe was just playing a trick on me when I saw him splitting kindling for the steamroom. I suspect he had come across some old stock of napalm or rocket fuel at an abandoned air force base or something. I have charred marshmallows around blazing campfires, I have drunk warm beer around bonfires, I have tortured my sinuses with wasabi, and recently I splashed some Sriricha Thai Hot Chili Sauce in my eye, but let me tell you that nothing compares to the feeling of 300 degrees of hissing lake water steaming your franks and beans. Nothing!

The first thing I noticed on September 9, 2004, was the fog. The second thing I noticed is that seal oil is the Metamucil of the North. Later I rustled up some breakfast while Joe made coffee. Joe informed me over coffee that he had a dream about a great big moose with “…antlers like giant spoons…” I said “Joe, it is the second to the last day of my hunt, I don’t care if those antlers look like forks.” We laughed and listened to NPR for a couple minutes and it was time to go hunting.

The skiff started right up and we shuttled to the meadow across from the cabin. Nothing. We slowly made our way to another likely-looking bay where we again found nothing. There was a tremendous amount of bear sign at every beach we stopped at. Grizzly tracks that were as long as my size 11 boots were common. We also saw quite a few of the large omnivores in person, and they were the biggest bears I’ve ever seen. In fact, several times I mistook a large grizzly on the beach for a moose. Joe just chuckled when I pointed out these moose with teeth.

Finally, we decided to head a different direction to a bay we had looked at a couple days earlier. There was a large hill we could climb and look over a massive meadow that moose crossed to get from the lower lake to the upper lake. We slowly cruised in that direction but the fog was getting thicker. We stopped in a couple places so I could walk across a meadow or two. Joe would drop me off and point me in the right direction, then pick me up a half hour later on the other side. By 11 a.m. it was looking like we were going to be just sight-seeing again. Moose seemed to be present only in our dreams. I was discouraged but I have learned that prey animals seem to appear when you least expect it. Plus, Joe’s confidence didn’t seem to be wavering. I had high hopes for this hidden corner - it looked moosey! However, just as the bay was coming into view we noticed massive plumes of smoke that smelled like…..BACON! I couldn’t believe it. A bunch of hunters were camped right at the base of the hill. I was devastated. I was thinking we should hurry to another location, or call it a day until the evening hunt but Joe wasn’t bothered.

We cruised past and crossed the lake and pulled up on a beach just across from the hunting party. We looked for sign and sat and ate some lunch. Soon the hunters loaded into a skiff and motored away, creating quite a racket. I was pretty bummed. I had really been looking forward to hunting this area and it didn’t look like it was going to be in the cards. I sat down beside Joe and glanced across the lake. I thought I must be dreaming! On the other side, about a mile away from us was a moose. Not just any moose. A massive bull moose with huge antlers that slowly wobbled from side to side as the bull ambled knee deep into the lake. He stopped and looked right at us. All I could see were his antlers. They were massive, I didn’t need binoculars to tell me that this was a legal bull. Joe saw the bull the same time I did. He gave me quick instructions and we jumped in the boat and headed over. We crossed the lake and the bay got shallow. I quickly got out and made a shot. I hit the bull high in the shoulder, then I fired twice more but the bullets didn’t seem to be doing anything. The bull just turned and walked away and stopped about 100 yards from me. I found his chest in my scope and one final shot brought him crashing down.

Joe and I walked up to the animal and I was impressed with his size and beauty. The antlers were massive and the moose was perfect in every way. He was just out of velvet, with antlers 55 ½ inches across. The palms were 45 inches long and 15 inches wide with long brow tines and twenty points. It took us three hours to skin and quarter the moose. I ended up with 550 pounds. of the most delicious wild game you could ever imagine. If you’ve never gone moose hunting it is definitely something that should be on your list of things to do. I don’t know what advice I’d give someone who was going to go moose hunting in Alaska, I think I would just tell them that “tuntuvak” means really big deer!