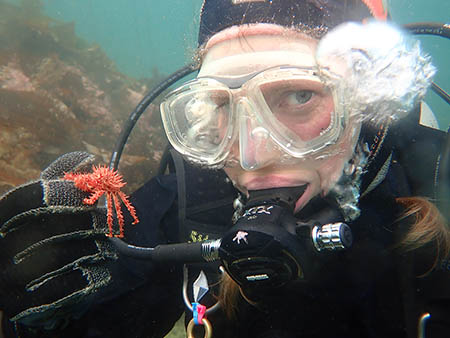 King crab are an Alaska icon. They are delicious as well, and insuring they are available for harvest requires careful management. Biologists who oversee king crab in Southeast Alaska waters monitor the big, spiny crabs - and the Alaskans who catch them as well.

“People might have a potful of crabs and think that they’re everywhere, but it takes a long time to grow one of those things,” said shellfish research biologist Adam Messmer, who is based in Douglas and serves as the assistant management biologist for the Southeast Alaska region. “They are seven to nine years old when they become legal, which is comparable to a legal Dall sheep.”

King crab are a long-lived species, Messmer said. Most crustaceans molt regularly as they age and grow, which helps biologists determine the age of an animal. But once a king crab reaches a certain size it can begin to skip molting, and might molt every two years, which makes it harder to age.

“Older crabs have barnacles and other types of fouling growth on their shells, because they don’t molt as often,” Messmer said. He said Japanese researchers have aged big, older crabs at 20 to 24 years old, and those older male king crabs are important. “In the reproductive scheme of things, they are productive and can fertilize a lot of female crabs – they’re more productive than smaller males, so it’s good to keep a proportion of the population of those large crabs around.”

Messmer said the largest red king crab on record is a 24-pound crab with a six-foot leg span.

A legal king crab is seven inches across the carapace, spine to spine, and weighs about seven-and-a-half to eight pounds. A Dungeness crab will reach legal size (six-and-a half inches across) in about four years, and weigh about two-and-a-half pounds. In both cases, only male crab may be taken.

Biologists conduct annual surveys to determine if there are enough crab for a fishery. Over a nine-day period beginning in late June, they set and pull hundreds of king crab pots in designated areas. The state research vessel Medeia serves as the crab boat. 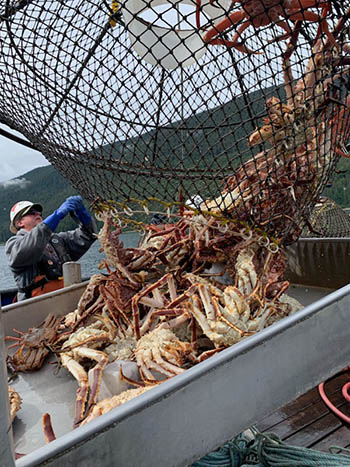 Red king crab are emptied from the pot to the measuring station during the annual Southeast survey aboard R/V Medeia.

“We call it the Friendliest catch; they all go back in the water,” Messmer said.

Biologists draw on more than 30 years of data regarding pot placement and catch. “The bottom is stratified onto five levels of abundance, and places with better habitat get more pots,” Messmer said. “The exact pot locations are randomly generated. Depending on the size of the bay, we have different numbers of pots. In the Juneau area, 11-A, not counting Barlow Cove, we set 196 pots.”

When the pot comes on deck, biologists sort the crab by size and age and determine their status: pre-recruit, recruit, and post-recruit. Messmer said a crab should be able to reproduce once or twice before it becomes legal size. “We can look at trends, so if there are more pre-recruits, crabs that would be coming into the fishery next year, that’s good. If you have a lot of legal crab (recruits and post-recruits), and not too many pre-recruits coming in, you would be more conservative.”

Biologists determine if there is a harvestable surplus to warrant a fishery – both commercial and personal use. A threshold of 200,000 pounds for all of Southeast must be met in order to have a commercial red king crab fishery for the region. The region-wide possession limit for the personal use fishery is determined after biologists analyze the survey data. Specific areas may be closed where numbers are low, and in 2019, Peril Strait, Gambier Bay, and Lynn Sisters are closed.

“The Juneau area has an allocation plan where, by regulation, 60 percent of the harvestable surplus goes to personal use, and 40 percent goes to commercial.” Rebert said.

“If the whole region doesn’t add up, then the 40 percent for commercial stays in the water,” Messmer said. That assessment, which applies to 11-A, is usually determined and announced by mid-September. 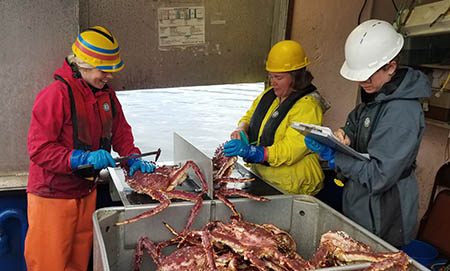 Tessa Bergmann measures red king crab (left) while Katie Palof tags them and April Rebert records data (right). The live crab are then released back into the ocean.

Outside of 11-A, in an area like Petersburg, for example, the current bag limit is three king crab total (one red or blue and two golden or just three golden) per day in possession, and there is no current seasonal limit. The season is much longer, so there is no need to open a special winter season: red and blue king crab may be taken from July 1 through March 31 and golden king crab may be taken from July 1 through June 15, unless closed or reduced by Emergency Order.

Before 1970 there was no closed season for red or blue king crab in Southeast Alaska. As pressure on the resource increased, managers established seasons, gear restrictions (limiting the number of pots per vessel), bag limits and reporting requirements. Personal use king crabbers need a sport fishing license and a personal use permit. One permit is issued per household.

The permit requires the public to report back: the number of king crab harvested, species, what kind of gear used, where king crab were harvested, and how many times the pots were pulled.

Dungeness are managed differently. The information is based on the commercial fishing effort. Fishery biologist Tessa Bergmann, based in Petersburg, said the public just needs a sportfishing license, there is no permit required, and no reporting. There is no closed season for Dungeness, and the daily limit in most of Southeast is 20 male crab. “The bag limit is pretty phenomenal for residents,” she said.

In the Juneau area, there are two separate king crab fisheries, summer and winter. Rebert said one reason the Board of Fish separated them is to provide crab for dive fishermen who traditionally harvest during the winter when crab move into shallower water. Ten percent of the total harvestable surplus is allocated to the winter fishery.

Rebert is a diver and participated in the winter dive fishery for king crab as a personal user last winter. “I got my limit of three,” she said. “For one of the dives, we went at night and they were right there in about 20 feet of water, tons of them. It was pretty cool. We go in pairs, with a flashlight in one hand and a bag in the other.” 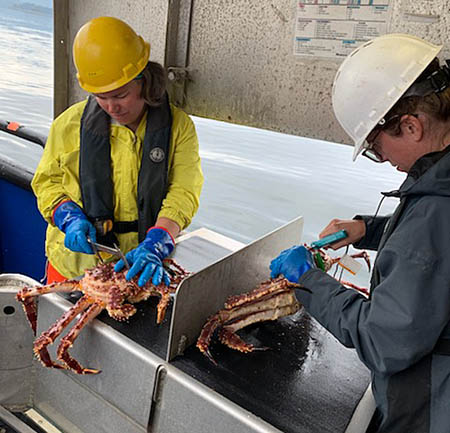 Biometrician Katie Palof measures (left) while biologist April Rebert tags (right) reg king crab during a survey. The live crab are then released back into the ocean.

She also carries a crab stick or crab gauge, a slotted measuring tool with a seven-inch gap, and measures the crab underwater. And the crabbing is not always that easy - she said it’s hit-or-miss when you dive. “They can be right there, or you have to swim to find them. That might be 30 to 40 minutes per dive, depending on how much air you have and how deep you are.”

King crab are easy to catch underwater, relative to Dungeness.

“Dungeness, that’s a chase,” she said. “They are jukey and fast. You see a big one and you are swimming as fast as you can. You can outswim them, but it takes a lot of energy. I like partner-chasing Dungeness. King crab, you just pick them up. They’re not fast – they’ll run a little bit, but they seem to get tired.”

As might be expected for a winter fishery, weather is a big influence on effort.

“This year the effort was high because the weather was good,” Rebert said. “It was snowing, but the water was calm. In Juneau, Auke Rec and Auke Bay were pretty calm. The allocation went a lot faster than we anticipated and the harvest was good. We allocated 1,268 crab and caught 1,13.”

To help Southeast Alaskans better understand king crab, biologists acquired a three-dimensional scan of a real legal king crab and had life-like crab 3-D printed. The 3-D crab “lives” in Douglas office, but it will travel for Fish and Game events and school presentations.

In early August, the Douglas office accepted about 40 suggestions to name the crab. The top five suggestions were selected by biologists, and then a vote was taken by the shellfish management group. The name “Kingsley,” submitted by Deborah Hart, won the votes.

The dried carapace and legs of actual crabs have been used in the past, but they are pretty brittle and the color fades. Kingsley is durable and realistic.

Kingsley weighs seven-and-a-half pounds, close to the actual weight of a live crab of that size. It is anatomically correct, with a male abdominal flap. Folks can practice measuring it correctly across the carapace. The crab also helps demonstrate one of the ways to differentiate red, blue and golden king crab – the number of spines on the mid-dorsal plate. “It’s a lot easier to show someone than explain it.” Rebert said. 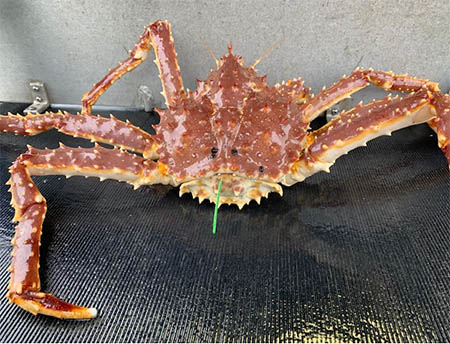 A tagged red king crab from the Excursion Inlet survey, summer 2019. The tag will stay on the crab through the molting process.

“All of our molt increments (the size in which a crab grows each time it molts) come from Kodiak, we’ve never studied that here to see if our molt increments are different from theirs,” said Messmer. “We’re tagging crab in Excursion Inlet and Seymour Canal with a tag that will stay through the molt.”

About 400 crab were tagged in mid-summer of 2019 in Excursion Inlet, just east of Glacier Bay, and about half that number were tagged in August in Seymour Canal, the long inlet on the east side of Admiralty Island.

Messmer said they expect to recapture tagged crab during the annual surveys in coming years. But if a personal use crabber brings up a tagged animal, they’d like to know.

“We are asking the public if they catch an undersize crab that has a tag, to not retain it,” he said. “If it’s legal, they can retain it. The tag has a phone number to call. We want a report where it was caught and we’d like the shell, but it’s not required.”

It is easy for the public to monitor fishery openings. “Anyone in the public can sign up on the Fish and Game website to get an email, for any specific area, for any gear or fishing type,” Bergmann said. “You can monitor every kind of fishing, hot off the press the second we post it. You get an email with a PDF and a link.”

Sign up here for Commercial Fishery Announcements, including personal use king crab

If you just want personal use king crab, pick the management area and district (Southeast) species (king crab); the gear type (personal use) and fishery (all). You can hit search to look at current and past announcements and subscribe to receive announcements.

Species profiles for invertebrates, include all three king crab species