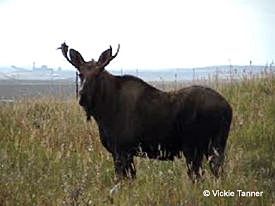 HOLY COW! DON'T SHOOT! Yes, that is indeed a cow moose, not a bull. She has an antler spread of about 24", with a deformity on the right side. She is also accompanied by a small calf that likely won't survive without its antlered mother.

Don’t shoot! It may look like a legal young bull – but it’s not. That’s a cow moose sporting a deformed set of antlers – and she has a young calf with her.

The pair was recently sighted near Nome in the vicinity of Dredge #5, near Icy View, by Vickie Tanner, who captured the antlered cow on video. Her husband Noel Tanner noticed, “That bull has udders!”

They watched the animal behaving in a typically maternal manner toward the calf.

Kate Persons, Alaska Department of Fish and Game wildlife biologist, explains that while it is unusual for a cow moose to grow antlers, it can happen.

“A cow moose may grow antlers if she produces testosterone, perhaps due to a tumor or an abnormality of the ovaries. Biologists call this as a velericorn moose.”

Although this cow looks like a bull, it cannot be legally harvested as a bull. “If this cow is mistakenly shot as a bull, there is little chance that the calf, which is quite small, would survive,” said Persons. And while Unit 22C has enough moose that ADF&G allows a limited cow hunt by permit, a cow with a calf cannot be legally taken.

This means that rarity of a moose is to be enjoyed only through the sights of a spotting scope or binoculars.