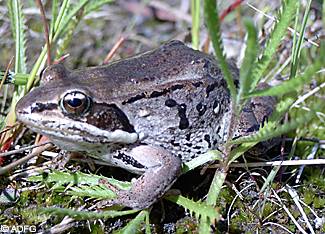 About 50 scientists recently gathered in Juneau to discuss issues facing Alaska’s amphibians, including the decline of Alaska’s toads and frogs. The First Statewide Conference on Alaska’s Amphibians, from March 30 to April 1, brought scientists together to coordinate research efforts and to share their knowledge about frogs, salamanders and toads in Alaska.

Worldwide, populations of amphibians have sharply declined in recent years. Scientists are concerned about the loss of species and the possible causes for the declines. The Alaska conference marked the first time scientists have gathered to specifically look at issues facing Alaska’s amphibians.

Alaska is home to three species of salamander, one species of toad and two native frog species. Two species of frogs have been introduced to the state. Six of these amphibians are restricted to Southeast Alaska, but the wood frog, the most northern-ranging amphibian on the continent, is found north of the Arctic Circle.

“Wood frogs can freeze solid, and they’ve been seen as far north as the south slope of the Brooks Range,” said David Tessler, a biologist with the Alaska Department of Fish and Game. “That’s pretty wild. It gets pretty freaking cold up there.”

Tessler, who is based in Anchorage, was impressed with the wide range of participants at the conference. Biologists from the Yukon Territory, Oregon, Wisconsin and New Mexico joined scientists from Anchorage, Fairbanks and Juneau. Eight federal agencies, four state agencies and two nonprofit groups were represented.

“I think it was a historic event,” Tessler said. “It hasn’t happened before - at no time have representatives of land and resource management agencies gotten together in Alaska and talked about amphibians.”

Mary Rabe, nongame program coordinator for the Alaska Department of Fish and Game, said the conference was a good opportunity for scientists to coordinate and complement research efforts.

“People were able to identify gaps in knowledge and look at future survey, monitoring and research to fill the gaps,” she said.

Tessler said information on amphibians in Alaska is patchy, but there is evidence of very steep decline in western toads. A number of theories have been presented, including climate change and fungal disease.

Presentations at the conference included a look reptiles as well, specifically the four species of sea turtles found in Alaska waters. Other topics included the Native use of frogs in traditions and clan identification, documentations of western toads using hot springs in Canada, overwintering biology of wood frogs and winter breeding of spotted frogs.

Sightings of malformed and deformed frogs have been increasing in recent years, in Alaska and across the country, and scientists are working to document these reports and explore possible causes.

Other conservation concerns were discussed as well, including the possible effects of climate change on amphibians, the drastic declines of western toads around Juneau and other areas of Southeast, and the effects of pesticides and disappearing wetlands on amphibians.

The issue of collecting - and releasing - frogs and toads as pets was discussed. In other states, nonnative frogs have proved to be troublesome invasive species in areas where they have been transplanted, and pet store frogs released to the wild can introduce diseases to native frogs.

Hotspots for amphibians were also noted, such as the Stikine, Taku, and Tatshenshini-Alsek River corridors, and various hot springs and breeding ponds.