The Emperor of Geese 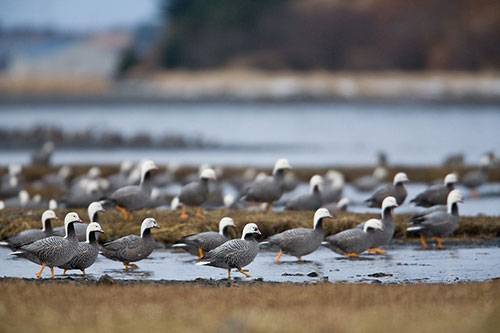 A flock of emperor geese. Photo by Milo Burcham

Last fall, for the first time in more than 30 years, Alaskans had the opportunity to hunt an emperor goose. About 500 waterfowl hunters applied for the permit to take a single emperor goose and 128 geese were taken. This year, the opportunity has been extended to non-resident hunters, and 25 nonresident permits were awarded.

“I know a couple of folks that are pretty excited about it,” said Jason Schamber. “One is a resident of Nevada, the other is from the Midwest.”

Schamber is the waterfowl program coordinator with the Alaska Department of Fish and Game. Because waterfowl typically migrate across state and national borders, they are managed by state and federal wildlife agencies, including Canada and Mexico. Schamber works closely with the U.S. Fish and Wildlife Service as well as groups like the Pacific Flyway Council and the Alaska Migratory Bird Co-Management Council.

Some geese migrate thousands of miles – like the dusky geese that nest on Alaska’s Copper River Delta and winter in Oregon’s Willamette Valley. But the emperor goose is a uniquely Alaskan species. Ninety percent of the geese breed on the Yukon-Kuskokwim Delta, and the remaining ten percent nest on the Seward Peninsula and across the Bering Sea on Russia’s Chukotka Peninsula. They migrate a few hundred miles and winter in the Aleutians and along the Alaska Peninsula to the coasts of Kodiak Island. 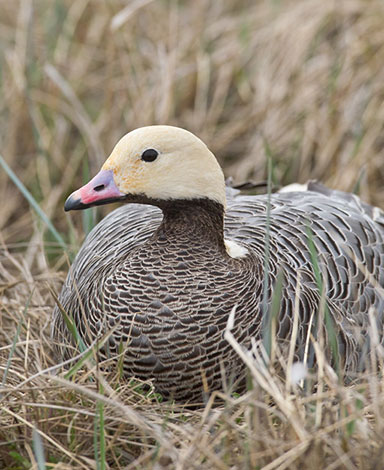 An emperor goose. Ninety percent of the world's population of emperor geese nest on the Yukon-Kuskokwim Delta. Photo by Milo Burcham

“Their range makes them special in their own right, they are an Alaska bird,” said Schamber. “Very few people have seen them, and hunters in the Lower 48 don’t get to hunt them.”

The Smithsonian Birds of North America describes the emperor goose as small, stocky, and thick-necked; adding that it is, “Perhaps the most striking goose in North America.” Averaging about six pounds, the bird is about two-thirds the size of the familiar Canada goose. 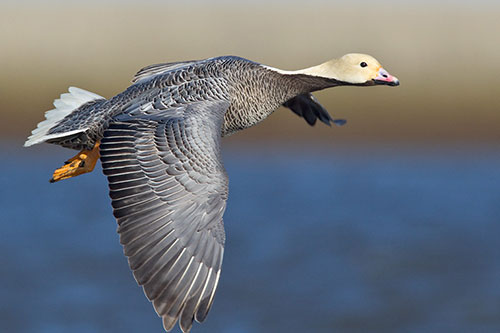 An emperor goose in flight. Most emperor geese spend winters along the Alaska Peninsula, the Aleutians, and Kodiak Island. Photo by Milo Burcham

Since 1981, biologists have flown annual spring surveys in southwest Alaska to estimate goose numbers. Population estimates are based on a three-year average of the annual surveys of migrants. In the 1980s, a decline in the population was noted; from a peak of more than 100,000 birds in 1982 to fewer than 45,000 birds in 1986. Harvest was restricted in 1985 and the bag limit was reduced from six to two birds. Harvest was closed in 1986, and subsistence harvest closed in 1987.

During the 1990s the population increased about two percent per year, and that increased to about three percent per year after 2005. The most recent three-year average (2014-2016) count was almost 86,000 birds, the highest since 1983. The Emperor Goose Management Plan allowed for a resumption of harvest.

Wildlife managers are proceeding cautiously to prevent overharvest. Federal regulations allow the state an annual harvest quota of 1,000 emperor geese. The Alaska Department of Fish and Game and the Board of Game established seven hunt areas across the range of emperor geese, each with an individual quota that together add to 1,000 birds. A hunt area will close after shooting hours on the last day of the season or by Emergency Order when the area quota is met.

An Alaskan waterfowl hunter can register to take a single emperor goose during the fall waterfowl season. In 2017, the first time in 30 years that hunting was permitted for emperor geese, a total of 128 geese were taken. To insure sustainable harvest, harvest quotas are established for seven regions in the winter range of the geese.

“Hunters are allowed one bird per season, and they carry a harvest ticket and punch the ticket when they kill a bird,” Schamber said.

Successful hunters then report their harvest within one to three days, depending on the hunt area. In 2017, although 509 permits were issued, only 209 of those people actually hunted, and only about half of those harvested a goose.

Emperor goose hunting in the fall-winter season is open to Alaska residents by registration permit and to non-residents by drawing permit. Follow the link on the emperor goose hunt page and note the specific hunt, (for example, RO501, the Kodiak area), and then click on the link to apply online for the registration permit. Beginning in the 2018-19 season, Alaska residents also may hunt emperor geese by proxy during the fall-winter season. 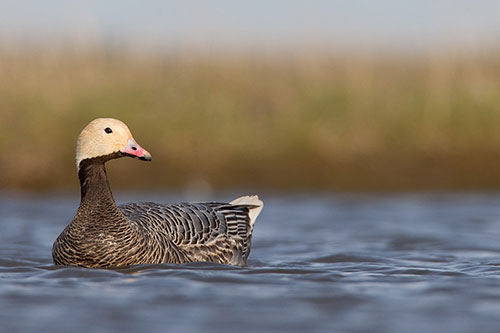 Emperor geese are managed cooperatively by the U.S. Fish and Wildlife Service and the Alaska Department of Fish and Game. Photo by Milo Burcham

Nonresidents can apply online beginning Nov. 1 and ending Dec. 15 at 5 p.m. (AKST) for a drawing permit to hunt emperor geese during the next year's fall-winter season.

Riley Woodford is the editor of Alaska Fish and Wildlife News and produces the Sounds Wild! radio program.