Working at a Fish Weir

By Lisa Olson and Tom Namtvedt 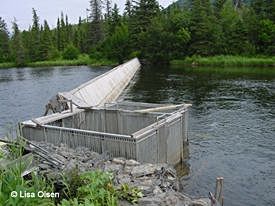 A fish weir, a long "fence", stretches across the Russian River, enabling Alaska Fish & Game technicians and biologists to study migrating salmon as they move upriver.

Fish weirs have been used to capture fish since prehistoric times. A weir, essentially a fence placed in flowing waters, directs the movement of fish.

Traditionally this was done to catch fish, but in modern-day Alaska, weirs are essential tools for the management and research of many fish stocks, especially salmon and trout.

Weirs help Fish and Game workers count fish moving up or downstream. Of all the streamside assessment tools, including counting towers and sonar, a weir gives the most accurate, verifiable count of the number of fish moving through the system.

In any given year, the Department of Fish and Game may oversee up to 40 weir projects and count millions of fish in Alaska, from the Arctic to Southeast. Every spring, summer and fall, a small army of fishery technicians and biologists ship equipment and supplies to camps where they may be living for months.

They count sockeye, chinook, coho, chum and pink salmon, and record the passage of other fish such as rainbow trout and Dolly Varden. Some weirs in Southeast Alaska are used to count steelhead and cutthroat trout.

Some weirs are remote, taking hours to reach in a boat or small airplane. Others are road accessible and are sometimes popular spots for salmon viewing. Some weirs are staffed by a lone individual who is relieved every few days; others have a crew of two or more, working longer shifts with few chances to leave during off days. Housing consists of a cabin, wall tent or travel trailer, and food is provided.

“Weir work is like being paid to camp,” said Tom Namtvedt, a fisheries biologist in the Mat-Su Valley. “There are a few days of hard physical labor, primarily during weir installation and removal, and during the peak of the run.”

When fish are few, time moves slowly. Weir staff pass the time by periodically checking the weir for fish, sampling the few fish that are ready to move upstream, eating, reading, listening to the radio, or maybe even watching videos.

In past years two radio programs were popular with isolated weir workers: “Radio Reader,” out of Dillingham, and “Northwind” on KHAR-Anchorage. These programs broadcast personal messages, usually from city folk to those stationed in rural Alaska, such as: “To Shana at Alexander Creek, we will be out in three days after Fred has his tonsils removed,” or “To Crazy Olsons at the lake: we had just a few friends over, but everything’s fine.”

“When it’s slow, there is plenty of time for introspection, but when runs are strong, there can be a wall of fish actively pushing along the entire length of the weir,” Namtvedt said. “During the peak of the run, the urge to travel is great and salmon will rattle the pickets all night long. It makes you wonder if there isn’t a bear out there.” 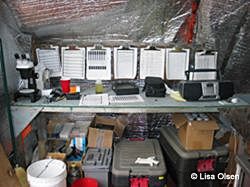 Moose River smolt tent: A temporary tent serves as an office and lab for weir workers studying coho salmon on the Moose River.

The trap is the gate to the weir, and when the trap is open, the fish proceed upstream. The person counting fish uses a small, hand-held counter and clicks the button for each fish that passes through. The counters re-set at 9,999, and thumbs get tired during years when hundreds of thousands of sockeye and pink salmon come through the weir.

“Once the trap is open, a continuous stream of fish can swim through from dawn to dusk,” said Namtvedt. “Counting is the easy part, but gets monotonous after you’d stood in one position all day exercising only your thumb on the tallywhacker. You have to make quick decisions. Was that a sockeye or coho? Some species are easy to distinguish, others are not. They didn’t teach weir fish identification in ichthyology class.”

Weirs also provide a cost-efficient way for fishery managers to get age-length-sex samples, which are useful in forecasting future returns and calculating escapement goals. Depending on the size of fish, however, sampling can be a real wrestling match.

“Everyone who takes these samples must think ‘There has got to be a better way,” Namtvedt said. Staff must work quickly in order to minimize stress to fish. Research biologists insist that fish are measured to the nearest 5 mm, from the middle of the eye to the fork of the tail. But in practice, the fish is thrashing, the tape is sliding, and the tail is rarely fanned out enough to see the fork.

“Scales on brightly colored sockeye and coho are hard to grab, and sexually mature chum salmon scales seem to be held on with super glue,” Namtvedt said.

Weir staff must then determine the sex of the fish by external anatomy: hooked snout? humped back? round belly? In one season, from 500 to 700 fish may be sampled at a single weir. Namtvedt summed up the wet work.

“Warm days are great, cold days are bad,” he said.