By Mark Witteveen and Tyler Polum 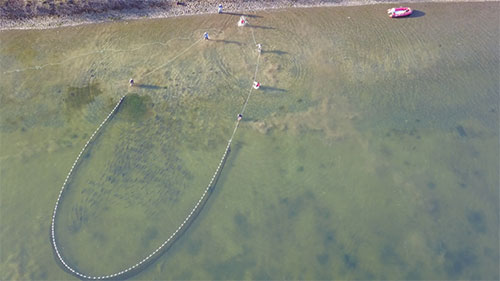 Using the drone to locate and beach seine coho salmon for tagging. Note the school of fish in the net. You can watch the entire seining process here: video from seining at Pasagshak Fall 2017

Recently, in the Kodiak Division of Sport Fish office, we were brainstorming ways to try to get a better handle on the coho salmon escapement in the Pasagshak River just south of the City of Kodiak. We face a challenging set of environmental changes in this area which seem to be changing coho, or silver salmon, run characteristics. Our traditional survey methods made it appear the runs were nearing record lows, but angler reports and our own observations suggested otherwise, leaving us with a need to more reliably measure spawning escapement, or the number of adult coho salmon reaching their spawning grounds. Recent advancements in unmanned aerial vehicle (AUV) technology provided an answer to our dilemma. A drone turned out to be the ideal tool to use in a test project to evaluate drone technology and tag recovery methods using aerial video footage when studying Pasagshak coho salmon. In 2017, using a DJI Mavic drone, we were able to successfully count coho salmon, and identified tagged fish from the air in the Pasagshak drainage.

Since the 1970s, each of the Pasagshak tributary streams has been surveyed by walking each stream between three and five times during coho salmon spawning to capture a peak abundance index of coho salmon escapement and to document trends in escapements. The data series was formerly robust enough to create a lower bound sustainable escapement goal of 1,200 coho salmon; however, the recent indices are thought to be less accurate due to environmental changes that we will describe shortly. The drainage supports a large sport fishery and a somewhat smaller subsistence fishery and is a highly popular recreation destination on the Kodiak road system. Monitoring of the coho salmon run occurs after most of the sport fishery has occurred, and management is somewhat reactive due to this. But, assessing achievement of escapement goals and tracking trends in coho salmon abundance is very important for this small run due to the relatively large sport fishery in the system.

The Pasagshak River is a very short river, about 2 miles long and is tidally influenced. The river flows out of a lagoon-like lake called Lake Rose Teed. Lake Rose Teed is fed by 15 tributary streams of various sizes, a handful of which are spring fed, although run off from nearby mountains feeds most of the tributaries. Lake Rose Teed formerly had two basins with a causeway for the Pasagshak Road running between the lower and upper parts of the lake. Tributary streams mostly flow into the upper part of the lake near the roadway and in recent years, this part of the lake has been filling in due to natural lake succession. Now, the road essentially forms a new lake shore with the shallow streams meandering through a marsh in the upper part of the lake.

Since the lake has been filling in, the tributary streams fed by runoff water have much more intermittent flows through the upper part of the lake, and coho salmon only enter these streams when a substantial rain event occurs. These variables present a challenge when trying to assess ‘peak’ spawning. Distinct spawning events occur when fish move up the tributaries, spawn, and die within a few days. In the past, fish have gradually entered the streams over time and build in number up to a peak spawning abundance and then gradually decline until spawning is over. Currently, as independent events, few if any fish remain in the tributary creeks between spawning events, so attempting to capture a peak of spawning abundance leaves you with several small counts of fish that more likely should be added together to get a measure of abundance then using a peak survey count. 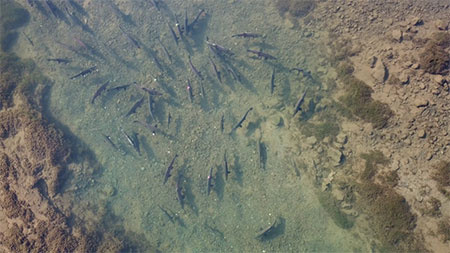 Figure 2: Image of tagged coho salmon from drone in the 2017 pilot study; there are 2 green and 2 pink tags in this image.

So that brings us to the drone. We needed to find a way to document this new spawning migration behavior and figure out how to monitor the size of the run. Originally, we wanted to create GPS tracks of each of these tributary streams that a drone could fly multiple times in a season. If we could tag fish in Lake Rose Teed with brightly colored disc tags, we could easily see them in the shallow spawning tributaries and count individual tags. Also, we could use multiple tagging events with different colored tags to document that the spawning events were in fact distinct, and we were surveying different fish in different surveys. As is often the case studying biology, we found out we weren’t able to study what we intended but learned a lot in the process.

We tagged approximately 150 coho salmon in Lake Rose Teed in two events using two different tag colors during October of 2017. We knew that spawning in the system was late, usually not starting until late October but more often occurring throughout the month of November. In the first tagging event, we used the drone intending to document beach seining coho salmon for tagging; however, we saw fish so well we ended up using it like a spotter plane! With a polarizing filter and 4k resolution we could see perfectly in the water, so much so we could distinguish spawning sockeye and schooling coho salmon. We were able to direct the crew in the boat to set the seine around a travelling school of fish and wrap them up before the crew even saw them.

We intended to wait until we did our normal foot surveys to use the drone to recover tags, but we got a little anxious and decided to fly the drone early a couple times around the lake just to see what we could see. We found that not only could we vividly see the tags in the clear waters of the Pasagshak watershed, but we could distinguish tag color and reliably count schools of tagged and untagged fish (Figure 2). We also found that the tagged fish dispersed very quickly throughout all the groups of fish we could see in Lake Rose Teed. Within a week after the first tagging event, we counted tagged fish throughout the lake and quickly realized we had an excellent opportunity to conduct a mark-recapture experiment. When the second tagging event occurred, we found that within a week, both color tags were found in all schools of fish we could find with the drone and they were showing up in the same color ratios as we tagged the fish. 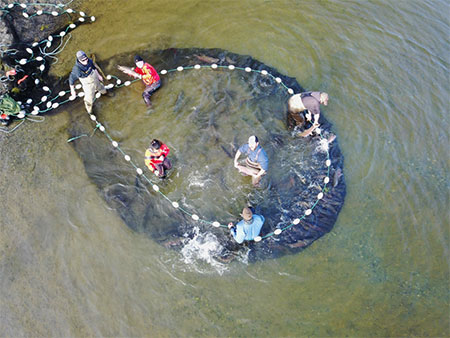 Conversely, we found out that the original plan to find tagged fish in the tributary streams was not such a great idea. There were a handful of places we could see fish, but a few limitations of the drone became apparent. A big one is that any vegetative cover reflects a large amount of light and severely limits visibility by the camera through the brush below even without leaves or other summertime vegetation. In addition, to get video that is clear enough to count fish you must fly slow while constantly adjusting the camera angle, altitude and position, relative to the sun to get the best visibility. Since this is dependent on weather and time of day, an ideal flight path on a given day is unlikely to be the best flight path on a different day under different conditions. So, a preprogrammed track was not feasible and with the large number of tributaries in the system, it would take nearly as long to survey with the drone as to finish a foot survey. In other rivers we utilize the drone to zero in on areas we know hold fish and are able to quickly establish an index of abundance but trying to survey the river in its entirety takes more time. In any case, we learned some of the limitations, but also a host of things that we could do with the drone.

In 2017, our goal was only to test the use of the drone and gauge how we could use it for recovering tags. We were able to come up with some back-of-the-napkin mark-recapture estimates for 2017, but more than that, we were able to refine our methods for 2018 and beyond. In 2018 we will be tagging coho salmon in Lake Rose Teed again in three tagging events with three distinct colors and will perform a more in-depth mark-recapture experiment. Hopefully with this technology, we will be able to get a better idea of the coho salmon escapement in Pasagshak in future years. Since the escapement goal is still based on foot survey data, we will have to figure out how our drone mark-recapture population estimates, and the foot survey counts relate to each other but for now we will be able to have a better way to measure escapement and evaluate spawning timing.

a video from seining at Pasagshak Fall 2017