The Truth about Wildlife Management in Alaska
Guest Editorial 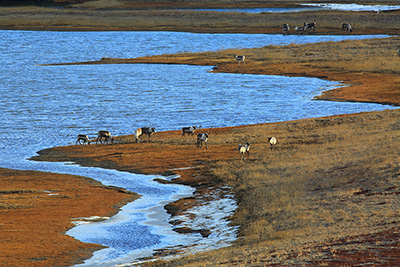 Caribou in the Western Arctic Herd. Photo by Jim Dau.

Alaska’s support for the National Park Service’s recently proposed amendments to hunting and trapping practices on national preserves in Alaska is not about trophies. It does not concern sport or recreation. It has nothing to do with predator control.

Alaska’s scale and geography are incomprehensible to most Americans. The state is enormous, largely without roads, and in many places as wild today as when its Native people first encountered Russian explorers some 275 years ago.

Grocery stores and jobs are scarce or nonexistent in Alaska’s rural communities. Lacking road access and affordable store-bought food sources, people in small communities scattered across the wilderness depend upon fish and wildlife for sustenance. It is for these Alaskans who “grocery shop” from the land that exceptions to standard hunting laws — both state and federal — are made.

The Alaska Board of Game, Alaska’s regulatory body for hunting and trapping rules, considers all regulations through an open public process. The board sometimes adopts exceptional regulations like those allowing harvest of black bears at den sites. The board allowed this only in a handful of remote locations where the practice is considered customary and traditional for obtaining food. The harvest is small and carried out mostly, if not entirely, by Alaska Native people who have taken bears in dens for thousands of years. The same is true of swimming caribou taken with rifles from boats, allowed only in two isolated game management units where caribou serve as a primary food source.

Taking bears in dens or caribou in the water are not widespread or popular hunting methods. Both activities are currently allowed under state and federal regulations in limited locations and neither is employed by the general hunting community. Bottom line, hunting guides do not take out of state clients on such hunts, nor do average urban Alaskans participate. Under the amendments to hunting and trapping rules recently proposed by the National Park Service, none of that will change.

Before statehood, Alaska’s fish and wildlife were managed by the U.S. government. Under federal management, salmon stocks were overfished, and in some instances wiped out, predators poisoned and bounties widespread. Management of wildlife lacked application of modern scientific principles to ensure sustainable populations of both predators and prey. 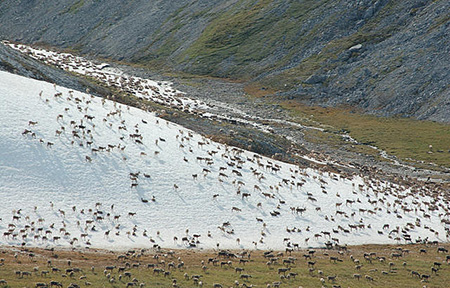 Caribou in the Arctic summer during a survey. Geoff Carroll photo.

Alaskans knew they could do better.

Twenty years later, Alaska’s authority to manage fish and wildlife on all lands within its boundaries was revisited and renewed under the Alaska National Interest Lands Conservation Act. Under ANILCA, more than 100 million acres — an area larger than the state of California — were set aside as conservation system units, primarily parks, preserves, and refuges. After the changes were ratified, Alaska’s fish and wildlife management jurisdiction remained in place.

In 2015, Alaska’s standing suddenly changed. Claiming the state’s regulations violate the Organic Act and related policies, the Park Service stepped in to override Alaska’s authority to manage its fish and wildlife on national preserves. The agency seemed to forget that state-regulated hunting and fishing are mandated uses under ANILCA, making them consistent with the Organic Act and related policies.

No scientific basis was given for the change. No biological concerns stated. In fact, wildlife populations under state management on national preserve lands overall were vibrant.

Now, with these proposed changes, the Park Service has offered an olive branch, one Alaska is grateful to receive. The issue is not about trophy hunting, recreation, or predator control. It’s about respect for rights granted at statehood.

It’s about allowing Alaska to continue to successfully, sustainably manage fish and wildlife on all lands within its borders in a way that is culturally necessary and appropriate.

It’s about recognizing that Alaska is in touch with its people, their cultures and traditions.

It’s about Alaska working with federal partners to restore and maintain a long-lasting cooperative relationship.

Sam Cotten is commissioner of the Alaska Department of Fish and Game.