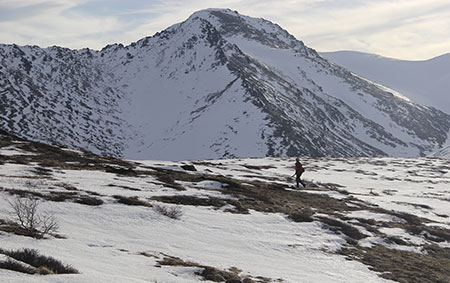 In the pre-dawn light of a cool, Alaskan winter morning I found myself huffing and puffing up what was proving to be a formidably steep slope in the Chugach Mountains. However, my dog Norm seemed to be doing just fine, bounding between wind-swept patches of crowberry while looking back at me seeming to say “what’s taking you so long old man?” Norm, is my family’s 4-year-old black lab that we got from a friend as an 8-week old bundle of cuteness more for waterfowl hunting than upland bird hunting. However, over the last year or two, he’s proven to be quite strong in the mountains helping me pursue ptarmigan and recover my rare harvest. He would likely have more success retrieving for someone else but he and I have had a lot of fun over the years.

On this day, Norm and I were visiting a favorite ptarmigan hunting spot still in sight of Knik Arm and the urban sprawl of Southcentral Alaska. I don’t have a snowmachine, four-wheeler, airplane, side-by-side, or other mechanized device that could greatly assist my efforts in getting back into the mountains. However, I do have an old worn-out pair of snowshoes with large built-in crampons that allow me to hike and climb up into ptarmigan habitat from the various roads in the area. It’s not easy, and it seems to be getting harder the older I get, but it has become more a way of staying in shape than hunting. I’m not a big fan of the gym and this climb was harder than any stair-master I’ve used with far better scenery.

Norm and I crested the first shallow ridge in the alpine just as the first beams of sunlight began bathing the nearby peaks in multiple hues of pink, orange, and blue. My breathing began to slow and I began to focus on the few sounds around us, the crunching of snowshoes on wind-packed snow, Norm’s panting, the quiet swish of Gore-tex, and, wait, what was that… the distant croaks of male rock ptarmigan? Norm heard them too and immediately spun around in the direction of the chatter. 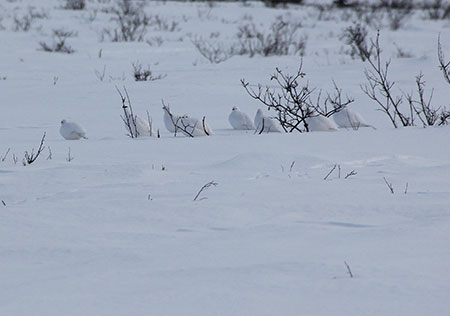 I quickly assembled my over and under 20-gauge shotgun out of my backpack, grabbed a handful of number 8 shells and slowly began to creep and crunch my way to the next shallow shoulder ridge closer to where the croaks had originated. Taking advantage of the growing daylight, I scanned the ridgeline with my binoculars looking for ptarmigan or their tell-tale tracks. There they were! I spotted the “Long Ranger” stripped male rock ptarmigan sky-lined along the ridge croaking to other nearby but not yet visible birds.

Rock ptarmigan are one of my favorite upland birds to pursue. They are among the three species of ptarmigan we have in Alaska and although generally not as abundant as their more common cousins, the willow ptarmigan, they occur across more of Alaska than the other two species (including the white-tailed ptarmigan). Rocks tend to occur at higher elevations and in more barren, wind-swept landscapes that offer far less protection. They are not afraid to take on bitterly cold, snowy winters and can actually come out of the winter heavier than they were going into it, provided they have adequate, high-quality snow for burrowing. Despite the common belief, males defend their territories year-round and are often heard in the deepest, darkest days of winter croaking and squabbling with other males. For me, I need all the help I can get and this croaking, if heard, can give a hunter an advantage, especially in the still early morning hours. 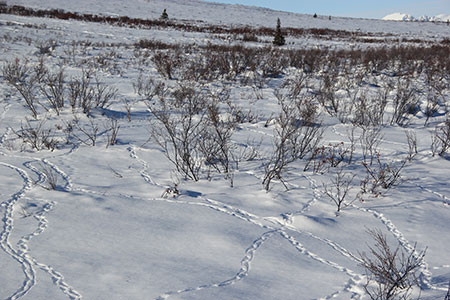 Ptarmigan tracks in the snow.

Although the sentry could see us, he allowed Norm and I to loudly crunch within 30 yards. That is when he stretched his neck and began to careen his head wildly forward and back letting me know that flight was imminent. I still could not see the other nearby birds but figured they had to be close. The next few seconds erupted into a dizzying blur of snow, feathers, and adrenaline as he and seven other rock ptarmigan took flight down off the backside of this shallow ridge. For a brief one or two seconds I had a clear shot and fired both rounds from my 20-gauge. As soon as I began to comprehend what had happened Norm was off like a rocket diving into the snow and retrieving the first of two rock ptarmigan. I got a double, I actually got a double I kept thinking to myself…stunned by my shotgunning accomplishment. Norm was thrilled too, his tail wagging wildly in circles as he ran up to me with the first bird. He gently dropped it on the ground at my feet spitting a mouthful of white feathers onto the alpine tundra and spun around to retrieve the second bird. I picked up my head in time to watch the remaining six rock ptarmigan flying across the steep valley in front of us and out of sight over a distant and snow corniced ridge.

Despite the simple white plumage of a rock ptarmigan in the winter, there is a clear elegance and beauty to these birds. They are perfectly adapted to take advantage of this otherwise hostile and seemingly barren landscape with their thick plumage and heavily feathered legs and toes. Their long nails allow them to excavate a snow burrow within seconds where they can stay for hours or days to avoid the cold and wind above.

After Norm happily returned with the second bird in his mouth, I reloaded my shotgun and we set off in search of more birds. Despite the recent snowfall of a few inches, a strong wind followed which scoured much of the fresh snow off this ridge making it tough to locate fresh tracks. However, on the lee side of this ridge where much of the fresh snow had been deposited, we quickly located fresh ptarmigan tracks. Norm immediately got “birdie” and began to intently sniff the ground being directed solely by the receptors in his snout towards a distant bird. Up ahead three more rock ptarmigan flushed allowing me to connect with a single, clean shot on the closest one before it flew out of range. 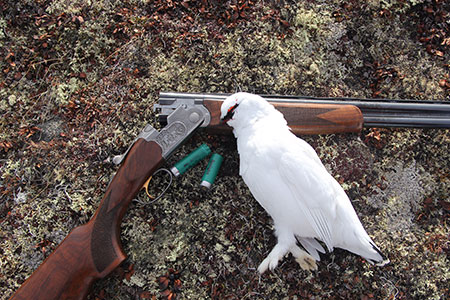 Norm and I spent much of the remainder of that day hiking four or five more miles throughout of the wind-swept high country. Those mid-winter days are short and as the daylight began to wane around 2-3pm we pulled our tired bodies back to my car with a mixed bag of three rock and two willow ptarmigan. Despite being close to large urban centers, the Chugach and Talkeetna mountains have tremendous ptarmigan hunting opportunities if one is willing to hike five to seven miles in a day. It is not unreasonable to harvest all three ptarmigan species in a day in either of these locations.

Back home and after an early dinner, Norm curled up on his fuzzy dog bed and didn’t move the rest of the night. Later that night I found him snoring with legs twitching and I could only think that he must have been sniffing down another large flock of ptarmigan in his dreams. Until next time buddy, sweet dreams.

Rick Merizon coordinates the small game program for the Division of Wildlife Conservation. He conducts research on hares, grouse and ptarmigan.