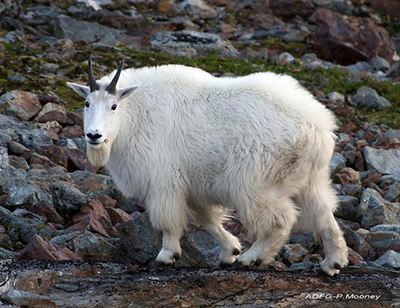 Photos of a mountain goat suffering from contagious ecthyma are not for those with a weak stomach. The scabby growths and lesions that often cover the nose, eyes, lips, mouth and ears look like abnormal scabby warts or oozing callouses. An animal suffering from this virus, which most commonly affects mountain goats and Dall sheep in Alaska, is no doubt in pain. And what’s worse, this virus can spread to humans by touching scabs of an infected animal; the virus enters the body through cuts or scratches on the skin, or through the eyes, nose or mouth.

But there’s good news. The virus is not fatal if it affects animals that are in good health. And cases among humans, especially those that come from a wild animal (most often contagious ecthyma, or orf, is found in domestic sheep herds), are extremely rare and quite mild. Perhaps the best news is meat from an infected animal is completely safe to eat, so long as hunters take care to keep scabs clear of anything that needs salvaging.

Kimberlee Beckmen is the wildlife veterinarian for the Division of Wildlife Conservation for the Alaska Department of Fish & Game. She’s seen contagious ecthyma show up in many wild animals — goats, sheep, musk ox, caribou, deer, to name a few — during her tenure on the job. She says it’s all over the state and hunters should be aware of what to do if they harvest an animal that shows symptoms.

“Essentially, anywhere we have Dall sheep and mountains goats, we have ‘CE’,” she said. “Right now, the most common cases we are seeing are in mountain goats around Juneau. They get sick and wander down into town, which prompts reports. Or, we see cases during capture work.” 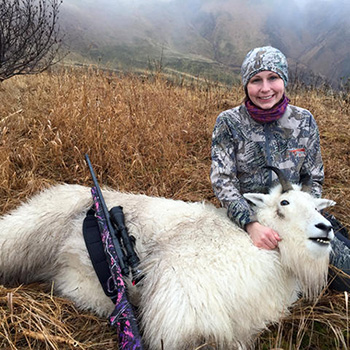 In October, two hunters from Juneau harvested a mountain goat around Swan Lake, near Petersburg. It showed clear signs of contagious ecthyma. Sores and callouses covered its muzzle and lips. Its eyelids were affected so heavily, it was completely blind in one eye as lesions had completely obscured its vision.

Area Biologist Rich Lowell said it was one of the most severe cases of CE he’s seen.

“We don’t’ see that many cases here in the Petersburg Management Area,” Lowell said. “Typically, we see less than one reported case per year, but every now and then we do get reports or questions about it. I suspect many cases are subtle and go unnoticed by hunters.”

The meat from the October goat was perfectly good for consumption, however.

“It doesn’t affect the meat as long as they do a good job butchering,” Beckmen said. “Make sure not to cut into the lesions, and if someone accidentally contaminates their knife, make sure to wash and disinfect it with soap and water.”

In the field it’s not always easy to have access to soap and water, but Beckmen said it’s the best way to keep contamination at bay. She said alcohol will not work to kill the virus, which is extremely tenacious, and can live for years in the environment. If hunters use good practices during butchering — wearing gloves, ensuring they don’t cut blisters or scabs, and washing hands, knives, clothes and items with soapy water — it’s easy to keep from getting infected. And she says to never move the hide or inedible parts of an infected animal. 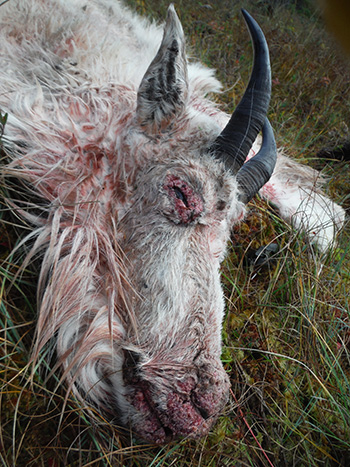 “No matter what the meat has to be brought out of the field,” Beckmen said. “Even if it’s been contaminated, you still have to take all the meat out with you.”

According to the Centers for Disease Control and Prevention, there is no approved treatment for an orf virus infection (that’s what CE is called in humans). In healthy individuals, the lesions, which usually only show up on hands, fingers or forearms, often clear up on their own within a few weeks. Cases can become more severe in those with a weakened immune system, and the CDC recommends seeing a doctor if symptoms — which include lesions that can ooze, mild fever and fatigue — become rapidly worse, or if it is accompanied by severe pain and high fever. These heightened symptoms could indicate a bacterial infection.

Years ago, Wildlife Biologist Kevin White remembers a time a billy showed up at the base of Mount Roberts, in Juneau. It was lethargic and after a few days it was clear the animal was suffering, likely from contagious ecthyma. After the animal was euthanized by biologists, samples were sent to Beckmen who confirmed the presence of the virus.

Contagious ecthyma most often affects the young and old animals in a population. Region One Regional Supervisor Ryan Scott, remembers that goat at the base of Mount Roberts. He also remembers a few other young goats that, after being blinded by lesions on the eyes, wandered down into the back yards of Juneau residents whose homes back up against the steep mountains that surround Alaska’s capital. When faced with a diseased animal, biologists always try to get the animal or a sample to Beckmen. 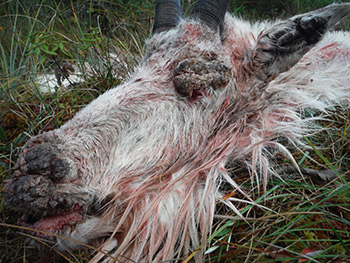 If hunters use good practices during butchering — wearing gloves, insuring they don’t cut blisters or scabs, and washing hands, knives, clothes and items with soapy water — it’s possible to salvage the edible meat from a goat with CE.

Hunters, too, can provide valuable samples to the state’s wildlife veterinary lab.

“Fresh is always best,” Beckmen said. “I don’t like things frozen unless I can’t get them within 72 hours.”

Freezing, Beckmen said, is best for preserving a product for eating. But for testing for the presence of a virus, like the one that causes contagious ecthyma, it’s really a challenge. She recommends, even hunters in the field, cut off a strip that is at least an inch long and at least a half in wide, that includes both good and ill-affected tissues and keep it cool, even if it has to be for two or three days. She asks that the sample be kept out of any medium like alcohol.

After looking at pictures of the goat taken in Petersburg with contagious ecthyma, Beckmen admitted that case was indeed pretty bad, but it could have naturally resolved.

“This is not always fatal,” she said. “This is not the most severe case, but it would be in the top 20. This guy couldn’t see well out of his left eye and probably had problems eating. I’m sure the animal was suffering. I’m glad the hunters took it out of the population.”