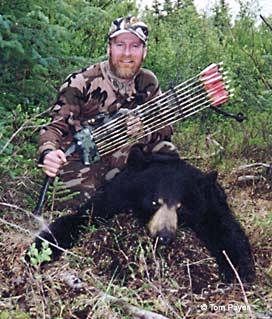 Bowhunter, Tom Payer, with a black bear taken over bait in Interior Alaska.

Almost two dozen black bears visited a bait station set up by Tom Payer in just three days, giving the long-time Alaska bowhunter ample opportunity for a clean shot at the bear of his choice.

Using bait to hunt black bears in Alaska has become a contentious issue, and this November voters statewide will weigh in on the debate. Some people believe that attracting black bears to bait stations is acceptable, sporting and fair, and allows hunters to be selective and humane. Others believe that attracting bears to bait stations is not appropriate and violates fair chase ethics.

Effective hunting techniques are based in part on topography, vegetation and access. In coastal areas, hunters can locate bears on beaches and hillsides. In mountainous country, spotting scopes and binoculars are used to spot bears at longer distances. In lowland forests, attracting bears to bait stations is the most effective means of hunting because thick forest cover makes other methods impractical.

Baiting is also used by disabled individuals or those who cannot hike extended distances, and by bow hunters, who must take animals at close range. In this article, three Alaskans shared their personal views of hunting black bears.

Mike Tinker has guided hunters in Alaska for 40 years and has seen no controversy on the subject from his clients.

“It’s never been contentious among hunters,” Tinker said. “I’ve never heard a strong preference from my clients for ground hunting or baiting. I’ve personally hunted both ways, and it just depends on what you’re trying to do. If you’re mainly interested in taking a moose or caribou and would like to take a black bear if the chance arises, you’re probably going to ground hunt. If your priority is to take a nice black bear, you’re probably going to hunt over bait.” 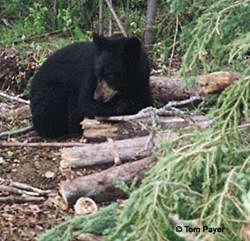 Tinker said hunting over bait could provide opportunity to hunters with limited mobility. “Younger hunters may prefer to hike while hunting. Older hunters may not be able to walk as far. And baiting is an ideal type of hunting for handicapped hunters or those who need to stay in one place.”

Joe Want has worked in hunting camps since 1958. He’s a brown bear hunting guide, and most of his guiding is done on Kodiak Island. He’s guided black bear hunters a couple of times, and said he chooses not to hunt black bears over bait. Although he has no problems with other hunters using the method, he says it just isn’t right for him.

“I’ve been conditioned for 40 years or so that it’s not legal for brown bears, so I’m not comfortable using bait for black bears,” he said.

Habituation is also a concern, he said. “I’m not sure if putting out bait to attract bears causes them to be habituated or not, but it could be. It’s a gray area, and I choose not to participate. If regulations allowed hunters to bait brown bears or to attract moose with grain, I wouldn’t participate in those, either.”

A large part of the reason Want hunts is to get out and see animals. “I hunt in places where you can see for miles and miles,” he said. “I enjoy being able to see all the things around me, and at a distance, too. If I can’t see, I leave and go to a place where I can. My impression of baiting is that you are confined to one area. You can’t see sheep on the next hill, moose in the valley, sows with cubs, or other animals. At a bait station you are focused on one thing and the opportunity to see other things is pretty restricted. I like to see for miles and miles, and if I can’t, I won’t hunt there.” 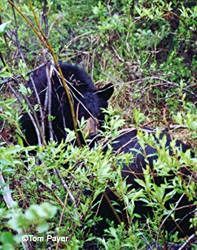 Two black bears sneak up on a bait station.

“As hunters we should try to achieve clean, quick and painless kills,” he said. “I haven’t found a better way to hunt black bears than over bait. I can pick and choose which bear I want to take. I can see if it’s a female accompanied by cubs. I can set the bait so that I have the best chance at a clean shot.”

Bowhunting requires a hunter to be much closer to an animal than rifle hunting. Payer believes bait hunting is an important option for bowhunters. “Bait allows bowhunters to be closer to the bears,” he said.

He and his partners usually establish stations well off the beaten path, in fact, near no path at all. “We fly into an area well away from trails,” he said. “The letter of the law requires stations to be at least ¼ mile from trails, but we always stay miles away.”

Payer’s group tries to establish the station during the week and then hunt from tree stands during weekends. They also avoid using any garbage in the bait they set, so clean up is much easier.

On his first weekend, Payer saw 22 bears at his station over three days, something he says could not happen with other hunting techniques. Over the years he has taken at least five black bears, several of them near record-book size. Payer loves bear meat, and hunts in part to fill his freezer.

As a hunter education instructor, Payer is aware that the baiting issue is controversial, and has discussed bait hunting with many other hunters. “Some guys have questioned whether or not it is fair to attract bears to a food source, but think nothing of hunting over a wolf-killed moose carcass, or taking a 500-yard shot at a sheep. I think using bait is as fair as what they do.”