Billy or Nanny? Mountain Goats Featured in Video
When Does Gender Matter? 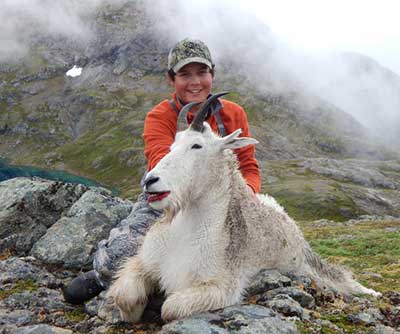 Antlers make it pretty easy to tell a buck deer or a bull moose from a doe or cow. With mountain goats and bears it’s more difficult to judge gender, and sometimes, it’s important. Accomplished hunters and serious wildlife watchers know that there are a handful of telling clues, and some dead-giveaways, that reveal the gender of these animals.

Wildlife managers in many parts of North America are working to reduce the harvest of female mountain goats. Mountain goats are found only in Western North America: in ten western states (sometimes in low numbers in just one or two locations) and in four Canadian provinces. In some states, hunters who draw a coveted tag for a once-in-a-lifetime opportunity to hunt a mountain goat are required to attend a class and pass a test regarding gender identification. Passing a gender identification quiz is required for some goat hunts in Alaska.

Alaska Fish and Game has produced a handy pocket guide, with color photographs, and an online course and quiz. The Rocky Mountain Goat Alliance, based in Bozeman, Montana, recently produced a 10-minute video that highlights the telling behaviors and physical characteristics of billies and nannies.

“It’s really good,” said Steve Bethune, a state wildlife biologists based in Sitka. Bethune manages goats and other wildlife on Baranof, Chichagof and Admiralty Islands in Southeast Alaska (Game Management Unit 4). He’s impressed with the video and said that he and his colleagues are seeing success in their efforts to encourage hunters to identify and target billies. 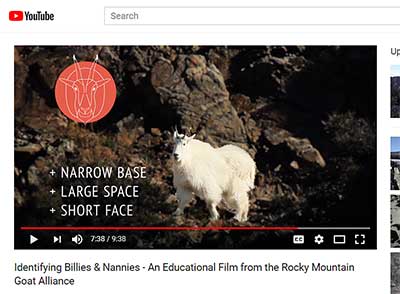 The educational video identifies the telling details that help identify the gender of a mountain goat, in this case, a nanny.

“Here in Unit Four we’ve had a significant decline in nanny harvest over the past five years,” he said. “Hunters have bought into it here. Although there have been fewer goats taken overall, the proportion of nannies to billies is very low. It used to approach 50 percent, and now it’s less than 10 percent. Last year there was only one female taken the whole season.”

Baranof Island mountain goats are popular with hunters, but like all mountain goat hunts in Alaska, access to the areas inhabited by goats is a big issue. Accessible areas get a lot of pressure from hunters, and hard to reach areas may be rarely hunted.

To insure that goats are not overhunted, quotas are set for game management subunits. Because nannies are so important to reproduction and recruitment of new goats to a population, nannies count for more than billies in the quotas. When that predetermined number of goats is harvested and the quota is reached, hunting is closed in the entire area. A large zone is closed, although there might be additional harvest opportunities in more remote portions of that zone.

A new management strategy for mountain goats on Baranof Island began in the fall 2017. Managers developed 34 small hunt zones. Dividing the island into more zones allows biologists to manage at the subpopulation level, and affords hunters more opportunity – the more remote zones can stay open after zones with easier access are closed.

Bethune said so far, the new strategy is working. “It’s early in the season and goat harvest has been low, but it seems to be doing what we intended it to be doing. I’m getting a lot of positive feedback from hunters. There has only been one nanny harvested this season, so we closed one zone. Previously that would have meant closing a much larger area. We’ll give it a season or two and see where we are at, but it is looking promising.” 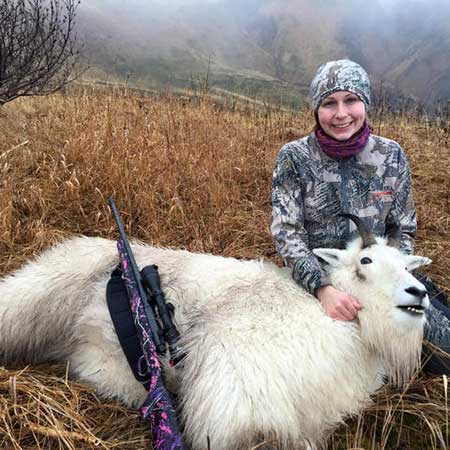 Angela Garofalo with her first mountain goat, a billy taken in 2016, on the Kodiak South Road System

“Kodiak is the perfect example. Our goat population is exploding in many areas of the island,” said Nate Svoboda, the state wildlife biologist on Kodiak Island. He said recent surveys indicate the highest number of goats in the island’s history. And that’s with very generous harvest guidelines for most of the island – a seven-month-long hunting season, a two goat bag limit, either sex, and a registration hunt as opposed to a lottery-style draw hunt. “That hunt, hunt number RG480, it’s essentially half of the island,” Svoboda said. “The faucet is wide open.”

Svoboda said that since mountain goats were introduced to Kodiak in 1952, the island has more or less experienced exponential population growth. By 2000 there were about 900 animals, and by 2011, that number had grown to 2,400. “This year we actually counted 3,254,” he said. “That’s what we observed, and we know we miss some so more than likely there’s more than what we counted. And that’s with the faucet wide open, so to speak. Kodiak is a pretty good example of not being able to harvest enough goats in some areas.” 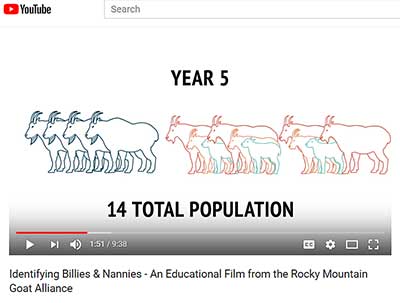 A still from “Identifying Nannies and Billies” that shows how removing a male goat instead of a female goat can result in 14 animals being recruited into the population after five years. If a female is taken instead, recruitment would be only seven animals.

About 250 drawing permits are issued for goats for parts of the island that are accessible from the road system, or areas where the population has largely leveled off. More than 1,500 hunting permits were issued for the RG480 registration hunt. The 2016 harvest was 214 goats in RG480, and the total for Kodiak Island was 315.

He said about 200 Kodiak residents hunt goats on the island, and the number of Alaskans from other parts of the state hunting the island is growing. In the early 2000s about 50-100 nonlocal residents hunted Kodiak, and in the past five or six years that’s grown to between 350 and 550 each year.

Charlotte Westing is the state wildlife biologist based in Cordova for GMU 6, the area around Prince William Sound. Managing goats in that area requires a consideration of biology, allocation, access and opportunity. She said Kodiak is dealing with an introduced population, and the goats in the Cordova area are native. “We have so much severe weather the population can be knocked back pretty easily in some winters,” she said. 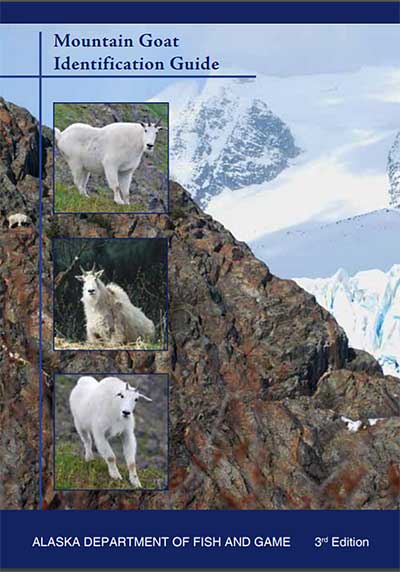 “We had really high nanny take on the road systems, where there was good access,” she said. “We felt that a lot of the high nanny take was because people didn't know it was an issue. We worked to really improve the online educational materials, and added more pictures and information.”

Education was one tool to reduce nanny harvest, another was regulatory. Westing said if you shoot a nanny in Unit 6 you can’t hunt goats again for five years in Unit 6.

Goat hunters are required to take and pass an online “mountain goat identification” quiz to hunt in Unit 6C (Cordova), Unit 6D (Valdez), and Unit 1D (Haines/Skagway). Westing said for someone with a good base knowledge of goats, it can take just 10 minutes.

Spending ten minutes watching the “Identifying Nannies and Billies” video before taking the quiz will go a long way toward improving that base knowledge.