Behind the Scenes: Who Decides
on ADF&G’s Bear Safety Advice? 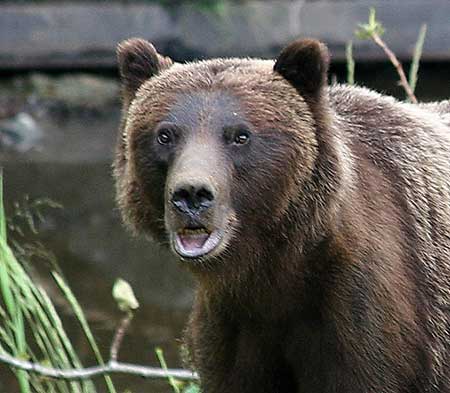 If you’ve lived in Alaska for a while or visited here, you’ve probably heard the basic bear safety advice – travel in a group, make noise, never run from a bear.

Most people don’t question the bear advice dispensed by agencies but every now and then someone wonders: Who decides on those messages? What information are those messages based on? How do we know the information is current and accurate?

Before we answer, we should make it clear that bear safety is never guaranteed, even if you take every precaution and follow the best advice. People should strive to remain calm so they can think critically during a bear encounter. Also understand that no two situations are exactly alike. Therefore, it’s impossible to say that if you do A when B happens, C will always be the result. The real world doesn’t work that way.

But there are certain things that wildlife safety experts agree upon that people can do to minimize risks. This advice has been developed over many years by bear biologists and continues to evolve as we learn more about bear behavior and human-bear conflicts.

In Alaska, a large interagency group convened in 2000 and 2004 to ensure that natural resource agencies throughout the state were delivering consistent bear safety messages to the public. The Alaska Interagency Bear Safety Education Working Group reconvened this year to reexamine existing bear safety messaging and make revisions based on new findings and new information.

Those revised messages are contained in a report, “A Framework for Bear Safety Messages in Alaska,” distributed this spring to agencies and to those who offer bear safety education and outreach in Alaska. 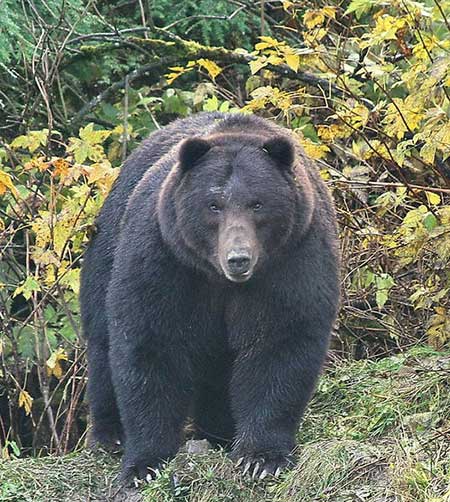 The messages and advice will ring familiar to anyone who has received advice on bear safety from a public agency. The document is intended to guide those whose job involves dispensing bear education to the public, or to anyone who is interested.

To obtain a copy, contact Kristen Romanoff, coordinator of the Division of Wildlife Conservation’s Wildlife Education & Outreach Program, at kristen.romanoff@alaska.gov.

While the interagency group is limited to Alaskans who work at state or federal agencies, the advice is based on work that reaches far beyond Alaska into Canada, the lower 48 and even internationally. The approach taken by the group is based primarily on work done by a group called “Safety in Bear Country Society.” That group produced the popular safety film, “Staying Safe in Bear Country,” still shown widely during bear safety trainings. Those involved with the safety society include well-known bear experts Stephen Herrero of Calgary and retired ADF&G biologist John Hechtel of Fairbanks. Both men are bear biologists who have spent considerable time studying bear attacks throughout North America.

The interagency group that worked on the messaging document consists of biologists and educators in Alaska from a variety of agencies including the U.S. Forest Service, the National Park Service, the Bureau of Land Management, the U.S. Fish and Wildlife Service, ADF&G, Alaska State Parks and the U.S. Army. 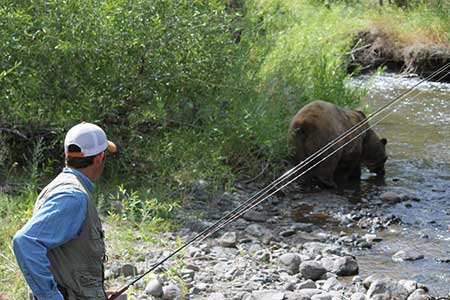 Anglers are at risk of surprising bears, since both the bears and the people are seeking out fish on what might be noisy, brushy streams and rivers. This interaction was staged with a captive bear in Montana.

Following a behavioral approach to bear safety developed by bear experts, the Alaska messaging focuses on breaking down bear encounters and attacks into two main categories – defensive vs. non-defensive.

Defensive encounters are when bears act aggressively because they feel threatened, such as when a hiker surprises a female bear with cubs. Your goal in these encounters is to de-escalate the situation and let the bear know you are not a threat.

Non-defensive encounters include bears that are curious, testing dominance, food-conditioned, habituated to humans or in rare cases, predatory. These bears are usually silent and may not appear stressed. In this kind of encounter, your goal is to show the bear that you will become aggressive if it persists, and that you will fight if attacked.

This emphasis on determining whether a bear is behaving defensively vs. non-defensively during a human-bear encounter reflects a shift in bear safety advice that occurred many years ago and has been previously provided to the public. Before that shift, bear safety messaging focused around identifying the species of the bear, because it was known that the vast majority of attacks on humans have been by brown bears acting defensively.

The most recent discussions on messaging reaffirmed that this behavioral approach is still useful, but that some explanation is needed for the public. It may be helpful for people to realize, for example, that coat color is not always a reliable indicator of species. Additionally, while the vast majority of attacks that occur in Alaska are by defensive brown bears, black bears can and do attack humans, mostly for non-defensive reasons but also occasionally for defensive reasons. Alaskans were tragically reminded of that by the two recent cases in our state this year, both thought to be predatory black bear attacks. It’s also helpful to know that while the vast majority of brown bears attacks are defensive, brown bears sometimes attack for predatory or other non-defensive reasons. That’s why it’s better to try to determine how the bear is behaving, and act based on that knowledge, if possible, not based on the species of the bear. 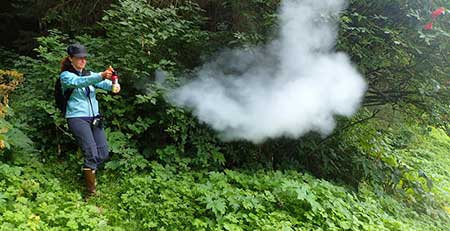 Some additions were also made to the document. Mountain biking was not that popular when the messages were developed back in 2000. Nor was bear spray. The revision contains wording on biking, running, pets in bear country, how and when to use bear spray plus refined messages for hunters on dealing with their harvested carcasses, for example.

To learn more details about bear safety, visit www.alaskabears.alaska.gov or contact your local Fish and Game office. The Department also offers wildlife safety presentations and works with partners who offer programs to the public. To learn about educational opportunities in your area, visit Fish and Game’s community calendar, http://www.adfg.alaska.gov/index.cfm?adfg=education.calendar