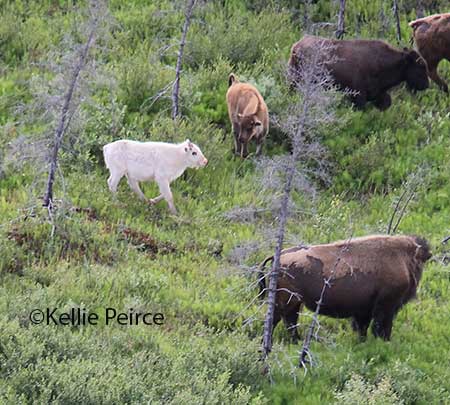 Kellie Peirce photographed this white colored bison calf in early July about 60 miles south of McGrath. The calf is with a group of normal-colored calves of the year and adults. ©Kellie Peirce, photo used with permission.

Josh Peirce has seen a lot of bison in his career as a state wildlife biologist. On June 8, 2017, he saw something new – a bison calf with a coat that was white instead of the usual reddish color.

Peirce is based in McGrath, a community about 225 miles northwest of Anchorage on the Kuskokwim River. The white calf was born into the Farewell Bison Herd, one of four herds of plains bison in Alaska. The Farewell area is the general home range of the herd, about 60 miles southeast of McGrath.

Peirce said the state wildlife troopers emailed him on May 9 with a report of the white calf, so he was looking for it in early June when he flew a spring survey of the herd. Peirce pilots the department’s Super Cub out of McGrath, and also owns his own airplane. He returned to the area in July for a family camping trip and his wife Kellie Peirce took several pictures of the calf.

At that time, he guessed the calf to be about three months old.

“It was born this spring, and we know it was born prior to May 9,” he said. “The herd has a fairly extended calving season, generally early April to late May.”

Albinism and leucism are both conditions that can cause an animal to have white fur, hair, skin or feathers. Both are caused by a reduction of pigments at the cellular level, and are usually genetic. Leucism can affect an entire animal, or just patches (animals with partial leucism are referred to as “peid” or “piebald”) and a leucistic animal will have normal-looking eyes. Leucistic lions are white, but have normal eyes and lips. Animals with albinism have pink eyes.

Peirce suspects the white bison is leucistic. In the photos, the calf appears to have a dark ring around its eyes and a light brown “cap” on its head.

Plains bison, smaller cousins to the giant wood bison, were first introduced to Alaska in 1928 when 23 animals from Montana were brought to Delta Junction. Three died within a few months, so all of the bison in Alaska’s four herds are descendants of 20 animals. It is noteworthy that the bison were obtained from the National Bison Range in Montana before the introgression of cattle genes into the herd. So Alaska plains bison are among the relatively small number of genetically pure plains bison. 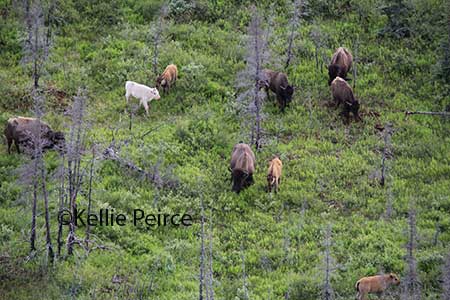 The calf is part of the Farewell herd, one of four bison herds in Alaska. ©Kellie Peirce, photo used with permission.

Peirce said that ranchers introduced cattle genes to bison in the Lower 48 in attempts to cultivate domestic qualities in bison for agricultural purposes.

“That was deliberate thing. A lot of bison today have cattle genes, and the introduction of those genes did cause some color variations in bison,” he said. “We’ve done quite a bit of genetic work on the Farewell herd, and there is no indication of any cattle genes in these animals, which is significant for bison conservation. That’s big deal.”

The Farewell herd is the result of two separate transplants. In August of 1965, 18 bison from the Delta Herd were flown to the Farewell airstrip; in August of 1968, 20 more animals were brought in. By 1972 the herd had grown to about 80 bison, and the first hunt was authorized.

The herd grew to about 350 animals in 1999, but a spring survey in 2006 revealed only 94 animals. A number of factors, including habitat quality, high harvest, and predation, could explain the apparent decline, but the herd has rebounded substantially in recent years.

Wood bison were reintroduced to Alaska in 2015 and are geographically distinct from the Farewell herd. The wood bison herd is about 200 miles west on the other side of the Kuskokwim Mountain range.

White bison are well-documented, although they are rare. White bison calves have been born in both wild and domestic herds.

Jim Matheson, the assistant director of the National Bison Association, said he doesn’t have statistics on white bison. “We hear about one or two white bison being born every year somewhere in North America,” he said. Matheson knows of one white bison in a herd at the National Buffalo Museum in Jamestown, North Dakota. 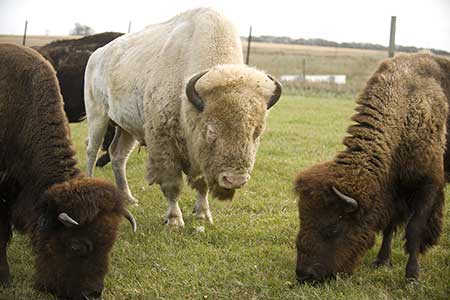 Ilana Xinos is the director of that museum. Until recently, they had two white bison in their herd of 30 animals, White Cloud and her son, Dakota Miracle. “White cloud died in November (2016), she was 20 years old,” she said. “She had 13 calves in her life, including a white bull. He lives with our herd now. I don’t believe he’s albino, he has normal eyes.”

Xinos said the museum has exhibits featuring white bison, including a picture from the mid-1930s of a white bull with a brown cap named Big Medicine, from the herd at the National Bison Range in Montana. Fish and Wildlife Service records indicate that Big Medicine, born in 1933, sired numerous offspring in his 26 year life, including an albino calf.

Alaska’s bison herds are descendants of animals from the National Bison Range in Montana.

Xinos said she’s heard of people breeding bison with Charolais cattle in a deliberate attempt to create white-colored offspring. “They don’t look normal, like normal bison,” she said. She added that such offspring tend to darken as they mature.

She said tourism and marketing outfits will tout statistics on the occurrence of white bison that are not reliable. “They’ll say one in a million, or one in ten million, but we don’t have a million bison in North America.” 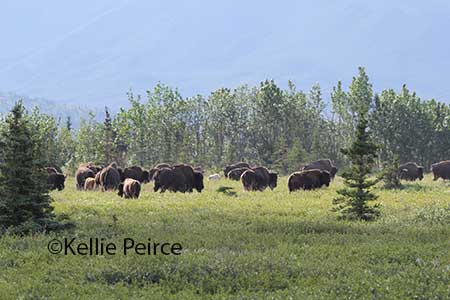 Bison in the Farewell area. The white calf is in the center surrounded by adults. ©Kellie Peirce, photo used with permission.

Bison hunting in Alaska is carefully managed, and all hunts are lottery-style drawings. There is no special protection for unusually colored animals.

There is a spring hunt (DI 352) and a fall hunt (DI 351) for the Farewell bison herd, and hunters apply for the drawing. This year 20 permits were issued for each hunt, for the first time since 2005, but not everyone who wins a permit goes hunting.

“We’ve had a pretty high number that didn’t hunt,” Peirce said. “It sounds great on paper but once you start putting it together you re realize it’s a difficult and expensive thing to do.”

The gender of the calf is not known, but the hunt is “any bison.” The animal could be harvested by a hunter unless the Alaska Board of Game takes action. Any Alaskan can submit a proposal to the Board of Game.

“I would not be surprised if someone put in a proposal to the Board of Game to protect it,” Peirce said. “Assuming it survives. Mortality is high in general with baby animals. But by this point, it’s made it through a pretty crucial time period for bison around here. If they make it this far, they’re doing pretty good.”

Riley Woodford is the editor of Alaska Fish and Wildlife News and produces the Sounds Wild! radio program.

For more on the introduction of animals to Alaska, and a complete history of the bison introduction, see Game Transplants in Alaska