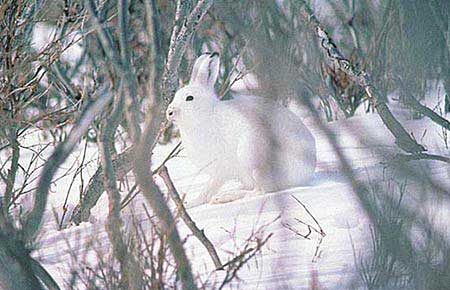 The Alaska hare's white winter coat serves as excellent camo in winter, but the black-tipped ears provide a clue. Weighing as much as 12 pounds (close to three times the size of a snowshoe hare) they are one of the largest hare species in the world.

Not many Alaskans are aware that we have two species of hare native to our state. Most Alaskans are familiar with the snowshoe hare and may enjoy hunting them throughout the state. However, residents of western and southwestern Alaska may also know about the Alaska hare (Lepus othus) aka arctic hare, tundra hare, or jack rabbit. The most distinguishing characteristic of the Alaska versus the snowshoe hare is their large size. They weigh between six and 12 pounds compared to the two-to-three pound snowshoe hare. They also have black-tipped ears, further helping distinguish them from their closely related cousins. They occur throughout western Alaska from Kotzebue in the northwest to Cold Bay on the Alaska Peninsula in the south.

There are three high latitude hare species in the world; the mountain hare in Scandinavia and Russia, Eastern Canada’s arctic hare, and the Alaska hare found only in western Alaska. All three share many traits including large body size, habitat, and general life history. Alaska hares have been hunted and admired by countless generations of western Alaska residents. In fact their fur coats are a prized liner to traditional parkas, and they are fine table fare.

Despite their large size and charismatic features there is very little known about our Alaska hare. Interestingly enough, recent research by Michele Cason and her colleagues through the Museums of the North and ADF&G found evidence of Alaska and mountain hares on several islands in the Bering Sea. This raises the question to whether there is movement between Alaska and eastern Siberia over the seasonal ice-pack connecting the two continents. Alaska hare appear to occur at lower density than snowshoe hares, however the magnitude of their natural population fluctuations is also unknown. 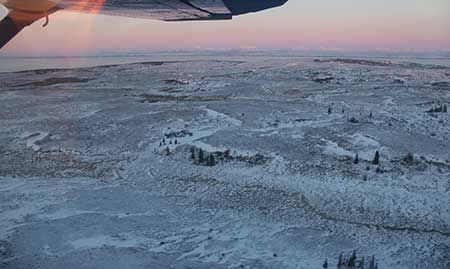 Found only in Alaska, tundra hares favor the open landscape of Western Alaska.

Therefore, ADF&G has recently embarked on a two-part effort to learn more about this interesting species. First, recently my colleagues and I have been trying to determine how to capture Alaska hares. This effort will assist the deployment of radio collars for future studies. We’ve been fortunate enough to talk with several researchers in Finland and Canada about methodologies they’ve found successful for their equivalent species. However, the Alaska hare’s nocturnal behavioral pattern, density, and remote locations have proven to be challenging. We have evaluated various bait, trap configurations, and netting techniques. Once snow returns to the western Alaska landscape this fall we plan to visit several remote locations to attempt the capture of several individuals. Those individuals will be fitted with a small radio collar placed around their neck that will collect up to four GPS waypoints per day. We stand to learn a great deal through even a few individuals about daily movement patterns, mortality, feeding habits, and habitat use. 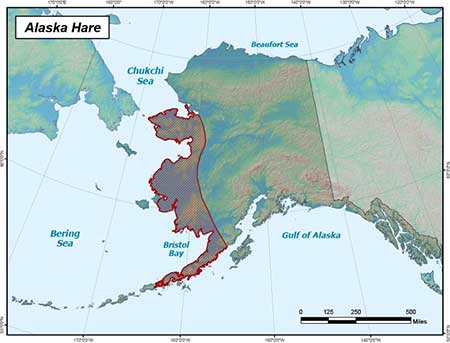 The range of the tundra hare.

The second component to learning more about Alaska hare is hearing from you. ADF&G would like to hear about your observations, traditional hare hunting techniques, and your experience with this unique species. Have you observed them in the wild? If so, where and how long ago? What time of day have you observed them? Are they on ridgetops or in shrub thickets? Are they more or less abundant now than in the past? If you’re interested in helping ADF&G learn more about Alaska hare habits, movements, and patterns that you’ve observed, we’d be extremely grateful for your insight.

Between your insight and our field efforts to deploy radio collars we can gain tremendous insight about this poorly understood species. ADF&G wants to not only ensure this species long-term viability but also ensure that hunters in western and southwestern can continue to enjoy this highly valued game species. 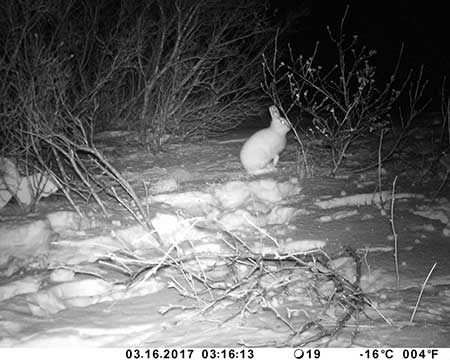 A motion-triggered trail camera captures an image of an Alaska tundra hare.

We also have free postage paid return shipping envelopes for any tissue samples. Also, look for recent Facebook posts and Sounds Wild Radio broadcasts for more information about this species and what ADF&G is hoping to learn about them.

Rick Merizon coordinates the small game program for the Division of Wildlife Conservation. In addition to hares, he conducts research on grouse and ptarmigan.