The Owl in the Toilet 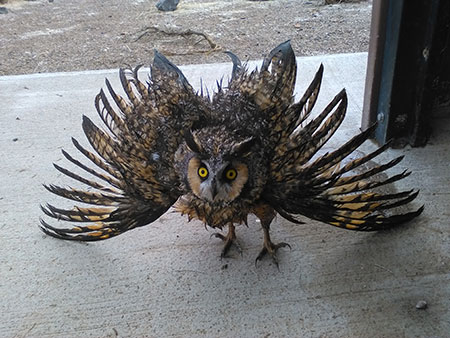 A long-eared owl dries out after being rescued from a vault toilet. Photo courtesy BLM (Lakeview, Oregon, district) and the Teton Raptor Center.

When wildlife biologist Joe Foust looked down into a campground toilet and saw a little boreal owl peering back up at him, something started that has likely saved the lives of thousands of birds.

The campground commode, a style found on public lands across the country, is known as a vault toilet. Typically a cinder-block-and-cement-pad kind of outhouse, without plumbing, the waste is stored in a tank (or vault) underground. A vent pipe through the roof allows air to flow. And it allows cavity nesting birds like that boreal owl access to a space they can’t escape.

Foust conducted a messy and successful rescue, and his story circulated among biologists and conservationists. When Roger Smith with the Teton Raptor Center in Wyoming heard the story, he decided to help. He’d heard stories like this before. That was in 2010, and awareness has been growing about the threat open pipes pose to certain types of birds. The Teton Raptor Center has been instrumental in spreading the word and developing a solution.

A number of ducks found in Alaska, such as buffleheads, goldeneyes, and mergansers nest in cavities. Owls, kestrels, bluebirds, and flickers are drawn to natural openings and cavities for nesting and roosting, and they’re attracted to open vents, pipes and chimneys. In the west, especially states like Nevada, it was common practice to drive a pipe into the ground to stake a mining claim. The smooth sides and tight confines prevent escape. As awareness has grown, and biologists have inspected these potential hazards, thousands of dead birds, as well as lizards, flying squirrels, and bats, have been found in these traps. In 2009, Audubon California removed a 20-foot tall pipe from an abandoned irrigation system and found hundreds of dead birds and lizards. 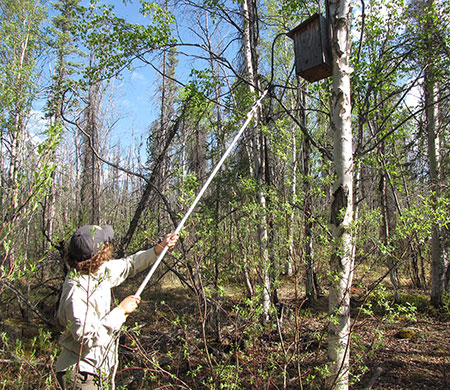 A boreal owl nest box. In many areas, there are more owls and cavity nesting ducks (mergansers, wood ducks, goldeneyes) looking for cavities than there are natural cavities available. Photo courtesy Travis Booms.

It happens in Alaska as well. In 2013, a technician with the Department of Natural Resources (DNR) working out of Fairbanks discovered a duck in a toilet at the Granite Tors campground, in the Chena River Recreation Area. Dane Happ, a ranger with Alaska State Parks in Fairbanks, recalled the incident.

“We had a merganser in there,” he said. “Of all the cavity nesting ducks, that’s the biggest one out there in the park. The tech was out there, as was a group of fire fighters, and they helped. The initial means of rescue did not work, so they floated it out using water pumps the fire fighters had.”

Filling the tank with water and floating the duck to the top of the toilet was effective, but it did require a special trip for a pump truck afterwards.

Happ is quite familiar with cavity nesting ducks. He said the US Fish and Wildlife Service has a large number of nest boxes set up within the Chena River Recreation Area, which Alaska DNR manages, and he’s been involved in efforts to capture, band and monitor nesting ducks over the years - particularly goldeneyes, but he’s handled mergansers. He understands why it would’ve been difficult to simply grab the bird. 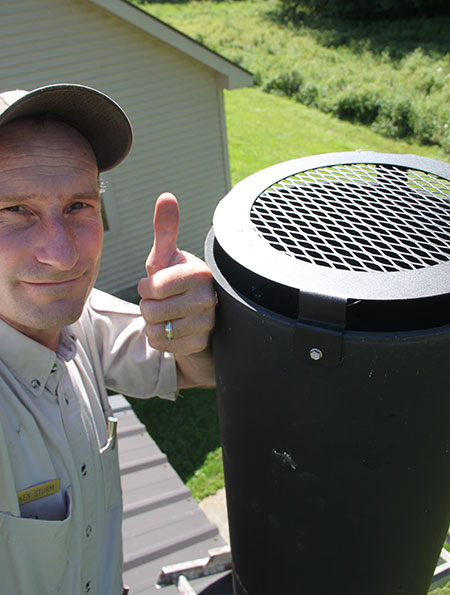 A screen is installed on the Missisquoi National Refuge by USFWS stafff.

“Mergansers are pretty tough to handle, they’re large, and in my experience, pretty angry when you try and hold them,” he said.

He also understands why the birds are drawn to openings and pipes. In some areas, there are more cavity nesting ducks than there are available cavities.

“Finding an ideal nesting location is difficult for them,” he said. “The hens are hard-wired to find cavities. These ducks have such a keen ability to recognize those cavities. The occupancy rate of those boxes is pretty astounding. And for those bigger ducks like mergansers, they really squeeze in.”

David Watson, with the Teton Raptor Center, said his group began working on screens to cover those standard 12-inch diameter outhouse vents in 2010. The first prototype was a flat screen mounted to the top, heavy-duty enough to withstand a load of snow. Two issues quickly emerged. The screens cost about $100, and that load of snow sealed the vent.

“We redesigned it,” he said. “The improved design is durable, easy to install, affordable and provides superior ventilation.”

The screens have about a three-quarter-inch gap around the edge so they circulate air and vent even with a load of snow, and the cost is down to $30. The Teton Raptor Center received a grant to cover vents in Grand Teton National Park, and in three national forests in Teton County. They launched an outreach campaign, and orders started rolling in. 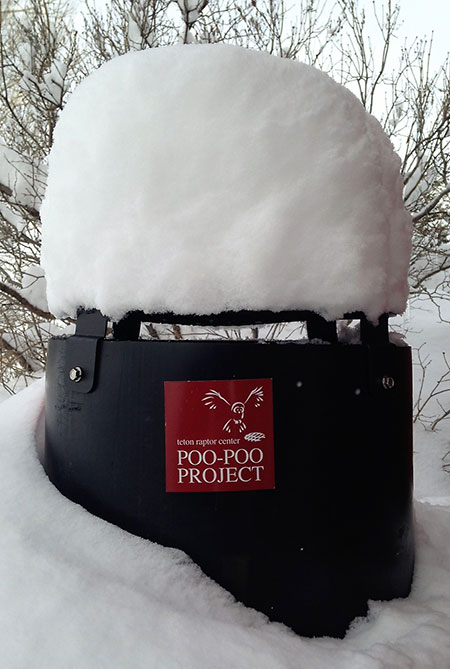 A screen covered with snow - the gap around the edge allows it to continue venting.Photo courtesy Teton Raptor Center.

“When people would order screens, they’d mention, ‘last year we had three wood ducks go down a vent,’ or ‘we found an owl stuck in the toilet,’” he said. “In Arizona they said woodpeckers go down in the toilets.”

In 2016 the Bureau of Land Management mandated that open vents and pipes on BLM lands be covered. The U.S. Fish and Wildlife Service produced a brochure, “Death by Pipe: Birds in Crisis,” to help educate, and the Nevada Department of Wildlife and Audubon California contributed and helped address the problem on lands in those states.

Alaska got on board last year. Alaska state wildlife biologist Chris Barger received a bulk discount on an order of 85 screens, and established a partnership with biology students at the University of Alaska Fairbanks - the student chapter of The Wildlife Society.

“This is a very easy direct conservation project, you can quickly solve something,” Barger said “It takes about two minutes. And by getting the students involved, they get to meet wildlife biologists with different agencies.” 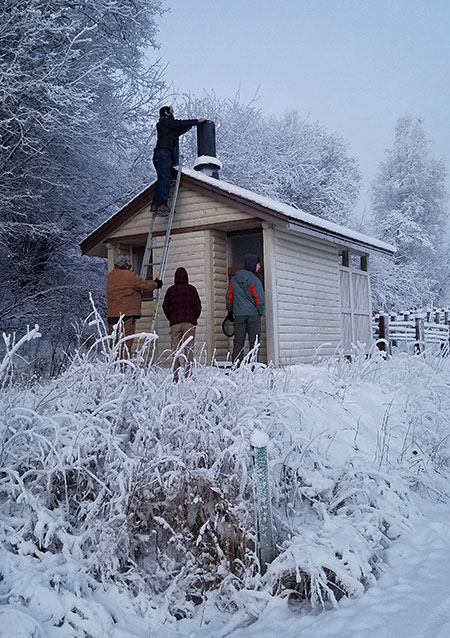 Biology students from UAF conduct a trial run installation of a screen at Pedro's Monument north of Fairbanks.

That includes state parks and areas managed by the Department of Natural Resources, and refuges managed by Fish and Game. Barger said the BLM is interested, and the National Park Service has already put screens up in Denali National Park. Four or five will be installed on ADF&G outhouses at Palmer Hay Flats this spring by staff in Southcentral.

“DNR is very supportive,” Barger said. “They just don’t have the staff or time to do it, and so it's great that the students are doing it. Students will be using their own vehicles, with Fairbanks as a hub. This spring they’re going to put them up Chena Hot Springs Road, the Steese Highway, the Parks Highway, and the Richardson. They will keep a database of when and where they installed them, and that’ll come back to me and to DNR.”

Jessica Herzog, a biology student and the president of The Wildlife Society chapter at UAF, has already gotten involved.

“We went out with Chris to do a trial run, up at Pedro’s Monument,” she said, referring to a landmark up the Steese Highway. “It’s a really easy install. We’ll start after spring break.”